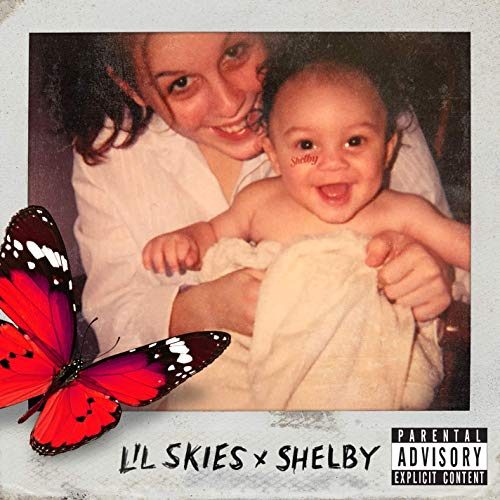 Kimetrius Foose better known as Lil Skies allegedly began writing songs when he was only four years old. Ordinarily without a citation to prove it I would be skeptical (and let’s be honest I still am) but because his father is a rapper named Dark Skies I’m at least willing to entertain the idea. I’m not sure how good his raps would have been at only four, but he’s 20 now, so by his bio’s math he’s had at least 16 years to work on his craft. Throughout that time he continued to be inspired and influenced by his pops, including the music they recorded together after his dad suffered third degree burns in a horrific workplace accident. It’s a blessing to both Kimetrius and his father Mike that he pulled through and that they were able to bond over it through music.

You’re not really here for the Lil Skies life story though — you’re here to hear about his latest album “Shelby”. It’s his second major label album following the success of “Life of a Dark Rose” in January last year. The fact he took over a year to release the follow up is potentially a good sign. Instead of immediately cashing in on the fact he went gold the first time out, he took the time to work on a follow up that keeps both his personal and familial legacy strong. Did he succeed? The first single off “Name in the Sand” has gone well, doing multi-millions of streams for the music video alone as of the writing of this review. That may also be because it’s a little bit disturbing to watch. It’s a cross between the Jonestown massacre and the movie Carrie. I don’t have to do much else but let you watch it but be warned if you’re triggered by images of (what at least appears to be) mass suicide/murder you should probably scroll past it.

Thankfully the follow up single “I” seems to be a little more positive visually, even if there are some things to discuss lyrically. Let’s put aside the fact that Skies is an AutoTuned artist, which makes his singing indistinguishable from dozens of his peers. That’s the style now – so be it. It’s less easy to justify the casual misogyny he shows with lyrics like “We shot a scene on some movie s–t/and she came right through on some groupie s–t/be surprised how they act when they know you lit.” So that makes it okay to dismiss a sexual partner, who presumably you filmed an X-rated movie with (and let’s not even get into consent) as just a “groupie” who was into it because you were high? In fact getting high/f—ed up seems to be his major pursuit when he’s not busy being casually dismissive to the female gender.

So we have here a heavily tatted rapper who could be a doppelganger for 6ix9ine save for the trademark rainbow hair, who happens to have the same musical style, who happens to talk about the same subjects as the incarcerated Mr. Hernandez. Since Hernandez is currently looking at 30+ years behind bars, Skies seems to by accident or design be the ideal candidate to step into his shoes and take his place on the charts. It’s by accident because Skies already looked and sounded like this before 6ix9ine plead guilty, but it’s also by design because he sounded that way before said same. The harder I dig into Lil Skies looking for depth the more I find songs like “Bad Girls” featuring Gucci Mane that reveal surprisingly little.

Even though he professes to prefer good girls over “Bad Girls” his definition of “good” is superficial at best — she looks good without makeup, she doesn’t act like a groupie, and she has her own money. That’s it? I’m going to guess since he’s young rich and famous, that’s all he thinks about in a potential partner as well. He’s not looking for a Harvard graduate, he’s looking for an Instagram chick. (Not to say you can’t be both though.) Either way it seems to me his definition is as shallow as his songs — no we definitely aren’t reaching “Atlantis Depth” here. I suppose the good news is that Lil Skies gave his fans exactly what they wanted for 42 minutes. Whether or not I agree with the lack of originality or the banal lyricism, he’s a success and will for the time being continue to be one. What makes this one hard though is I listen to his father’s raps and I hear the potential at least genetically for him to be so much more than this.