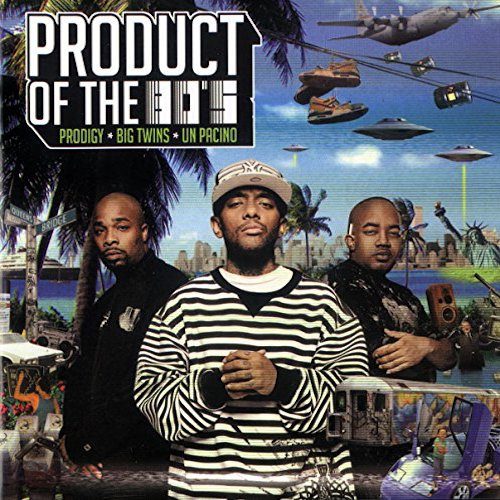 Grant JonesJuly 16, 2019
Back to the LabLPReview

First of all, Rest in Peace to Prodigy, one of the finest emcees to grace the microphone. Endlessly quotable, haunting delivery and a life full of pain support his iconic status, but his catalog is much more than just being one half of Mobb Deep. Second of all, apologies to any readers that may be wondering why we are covering an eleven-year-old Prodigy record. With the aim to review as much rap as possible, there are inevitably gaps in the RapReviews database, so occasionally we will go “Back to the Lab” and cover a record that’s not current.

Nobody talks about this Prodigy album. Granted, there are stone-cold classic LPs in the Mobb Deep canon, and an argument for Prodigy’s “HNIC” and “Albert Einstein” too, so an 80s-themed album from Sid Roams with secondary roles for frequent collaborators Un Pacino and Big Twins does lend “Product of the 80s” a confusing role in Prodigy’s catalog. Is it a Prodigy album? Is it actually 80s-themed? The cover suggests it’s the trio of P, Pacino, and Twins but in reality, Prodigy holds down 60% of the record on his own. Nonetheless, this record has its moments and any fan of Prodigy should have it in their collection.

Just as Havoc’s haunting style of production filled “The Infamous” and “Hell on Earth” with dread and depression, “Product of the 80s” is full-blown Scarface. Wrapped up in a nostalgic, synth-driven soundtrack, P is in the type of mood Tony Montana is before he got high on his own supply. This vicious mindset shows that thirteen years later, he might be thirty-two but his mind is colder. Years in the industry haven’t warmed P or softened him at all, with some glimpses into why the Queens icon is how he is.

The lack of a real childhood creeps into “Product of the 80s” as if the fascination with the 1980s holds experiences that Prodigy missed out on. The colorful artwork combining science-fiction, Hollywood and videogame influences are a mile away from the deadly serious, intimidating album covers Mobb Deep is known for. But it’s Sid Roams’ ability to craft beats that possess the feel of the 1980s, that makes this record so memorable.

Jake One, no stranger to a retro sound having crafted two superb funk-inspired “Tuxedo” albums with Mayer Hawthorne, blesses P with the best beat on the album:

Un Pacino casts an underwhelming presence, particularly after Prodigy’s verse, and the rest of the album doesn’t showcase Twins and Pacino in a great light. Used for occasional hooks, Twins makes effective use of his grimy, low vocal tone, but the best tracks end up being the solo Prodigy joints.

Throwing a nod to 2-Pac, Prodigy kicks off each verse with Pac’s “I ain’t-a killer but don’t push me…” but its Prodigy’s paranoia that dominates. Amongst the rampant sex, during the era of AIDS no less, Prodigy’s anxiety makes the world out as if it has barely changed since the 80s. “Cold World” and “Stressin'” further feed this dynamic, but “Am I Crazy?”, another standout song highlights the backward world we live in. The third verse is particularly intriguing, with Prodigy mentioning how he had a sign from God back in 1999 and only a few people listened to him, namely, Jay-Z who “chose to ride with the other side” a/k/the devil or Illuminati.

The short snippets that link tracks together, including 1994’s “Fresh” (also used on Ghostface Killah’s “Ironman”) give the cohesion a record like this desperately needs. In a way, it succeeds where Apathy and OC’s 80s Soviet record “Perestroika” didn’t in that the sex, crime, and fear are delivered without the complex rap flows distracting you. Rap was simple but effective during the 1980s and coupled with Sid Roams’ melodies, rather than chopped samples, ensure Prodigy’s songs truly are products of the 80s. It may not go down as one of Prodigy’s greatest LPs, but it’s definitely a personal favorite that largely succeeds at capturing the feel of an era that shaped hip hop.