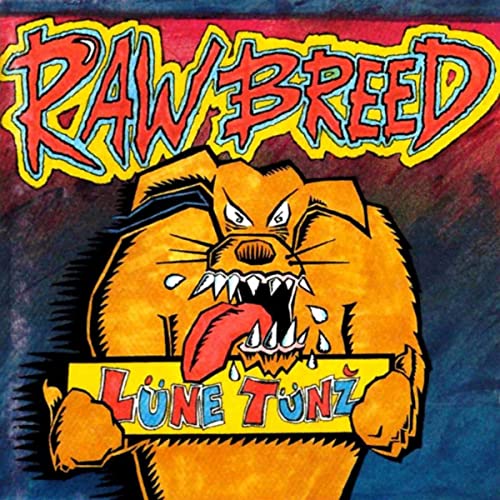 There’s obscure, there’s forgotten, and then there’s “Lune Tunz.” I dug deep into the recesses of my mind trying to remember anything about this group or their album before starting a review. The only things I knew were that they put umlauts over the U’s so you would know to pronounce it “Looney Toons,” and that their songs were inspired by Warner Bros. cartoons featuring Bugs Bunny, Elmer Fudd, etc. At least “Rabbit Stew” had the group’s lineup in the outro: Alexander the Great, Nick Swift, Marc Rippin, DJ Solo Fixx and Sam Swing. Props to Alexander for explaining who they were.

Information about the group or their album is remarkably scant beyond “it exists” given we supposedly live in an information age, but that also reflects the fact that before the mid-1990’s internet use hadn’t gone mainstream. It annoys me more than it should that I was online back then and didn’t write anything about them, so the only resource I can turn to is Discogs.com. They helpfully pointed out that Raw Breed hat at least one single other than “Rabbit Stew” called “Open Season.” Perhaps if you didn’t grow up with Bugs and Daffy yelling “Wabbit season! Duck season!” at each other this reference is completely lost on you — if so, now you know.

Thanks to Discogs I can also ascertain that Fixx, Swing and the previously unmentioned Sidney Mills split the production duties on this one. If I still had a physical copy of the album I could tell you specifically who did what track, but I cared so little at the time I’m sure I traded it in for store credit. I’m going to call that a mistake. Back then I’m pretty sure I thought they were an Onyx rip off with a silly cartoon gimmick. I’d still say the Onyx comparison is fair — their vocals are gruff and frequently shouted — but the pounding production of tracks like “Let Me Get Some,” “Jimmy Crack Corn” and “Gangway” supports it well.

I’m sure it’s a backhanded compliment to say Raw Breed is more about style than substance, but there’s not a single bar here that you’re going to quote later on. “Aiyyo gimme my dough so I can buy mad drugs/gimme my dough cause yo I gotta buy slugs.” These aren’t profound raps, clever punchlines, or in the case of “Jimmy Crack Corn” even that cinematic given they are talking about making stick ups to get bank. Everything about it is prototypical early 1990’s grimy rap… and that’s its strength. This is a forgotten group whose songs perfectly embody everything I remember about one specific era.

“Lune Tunz” is the kind of album you should pick up for nostalgia’s sake, not because you remember Raw Breed, but because you remember a time when every East coast group wanted their jam to sound like “Slam.” The good(?) news is that Raw Breed actually managed something of a career after this album with two follow-up releases, although they seem to be less well remembered and even harder to find than this one. That just gives me an incentive to go digging and find out if their sound evolved over time, or if “Lune Tunz” was the peak and it was all downhill from here.