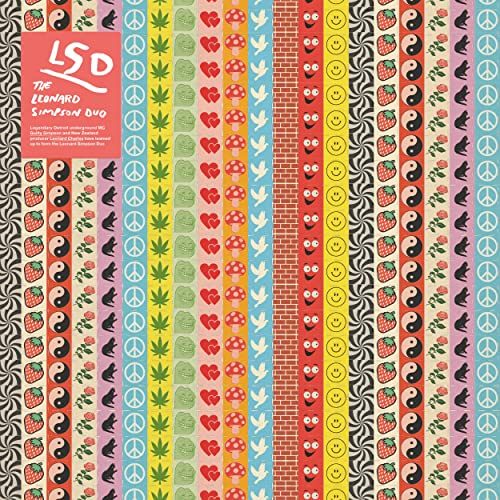 Ever since his Dilla-produced debut single “Man’s World,” Detroit rapper Guilty Simpson has always been at his strongest when paired with a visionary producer. As a result, most of his albums and collaborations have featured one producer. He’s paired with Apollo Brown, Katalyst, Oh No, Madlib, and now New Zealand producer Leonard Charles on “LSD“. If it ain’t broke don’t fix it, and Guilty knows that his flow is best served when accompanied by dynamic beats that can provide the right foil to his flow.

In video game terms, Guilty Simpson is a tank character: he’s strong and powerful, but not particularly dexterous. He raps in a blunt monotone as if he is constantly mean-mugging. Sometimes he sounds angry, sometimes he sounds morose, but there isn’t a lot of variation in tone or delivery. I don’t mean that as a knock on him; to me, Guilty is this generation’s Ice Cube, a rapper who manages to combine street wisdom and street menace in his persona.

Guilty doesn’t have a flow that lends itself particularly well to the more abstract contemporary hip-hop production. He’s not going to rap in double-time or heavily auto-tuned or sing his rhymes. He’s going to do Guilty, and he needs a producer that can accommodate and accentuate that.

Leonard Charles’s spacey boom-bap works great with Guilty’s flow. Charles’s beats are airy and dreamy but also have hard-hitting drums. He adds melody and texture to the music while still giving Guilty a solid foundation to spit his tales of street life and soured relationships.

There is very little artifice to Guilty’s rap persona. He’s not pretending to be a major drug dealer and he’s not claiming to have a lavish lifestyle. He remains a dude who came up through the streets and found an escape through hip-hop.

He comes out swinging on “My Inspiration,” in which he names his mentors and give a middle finger to his enemies:

On “Friends” he complains about fake friends, while giving shoutouts to his day ones:

“When you are on top they all flock
Everyone wants to be around a winner
Nice dinners
But as soon as the cash flow stops
Watch how the crew gets thinner
Go figure
No support? You’re cut short
If you ain’t treating
There’s no more meetings”

The LSD theme is mostly carried through Charles’s psychedelic beats, which sometimes incorporate sixties acid rock and sometimes lean more in a soul jazz direction. Some of the highlights of his production are the heavy organ stabs that punctuate “Breaking Bread” and “Heavy Organ,” the 70s lite-jazz vibe of “Friends,” and the Zamrock psych freakout of “The GOAT.” The album ends with the lingering and stony “Smokin Good,” which almost replicates the sensation of being high.

“LSD” might be my favorite Guilty Simpson album yet. It has a low-key burn that kept it on heavy rotation on my stereo. It occupies a similar lane as “Bandana” in my mind: funky, understated beats mixed with harder rhymes. It is definitely worth a spin, and I would advise shelling out for a vinyl copy.