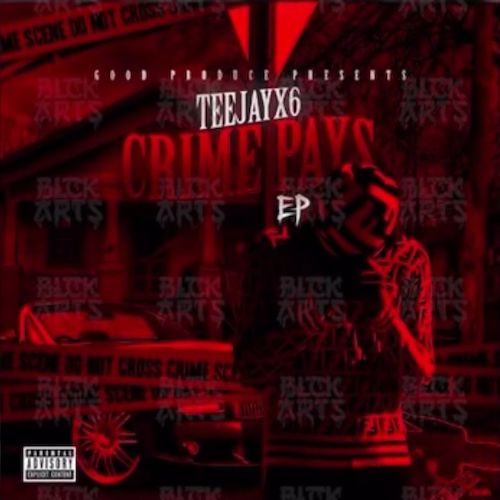 Detroit rapper Teejayx6 vaulted to national fame in 2019 thanks to a profile in Wired about “scam rap.” Hip-Hop’s musical scene is already regionally divided, pigeonholed into genres like nerdcore, drill, G-funk, trap, etc. and target marketed to smaller subsections of the audience. The last thing we need is to invent new subgenres out of whole cloth, but the article earnestly professes that “scam rap” is the latest thing and that Teejayx6 is the leader of this movement. The article’s provocative title “Teejayx6 will steal your identity — and rap about it” is pure click bait, but it worked. I was determined to learn more about Teejay and pulled up “Crime Pays.”

There’s a legend about the early days of N.W.A portrayed in the film Straight Outta Compton that Eric “Eazy-E” Wright was a terrible rapper. The story goes that Andre “Dr. Dre” Young had to make E record one line at a time and then sequence them together into a song because he had no breath control, flow or confidence in front of a microphone. I’m not here to say that Teejay is the Eazy-E portrayed on silver screen. He’s brimming with confidence and certainly isn’t hesitant in his lyrical delivery. The problem with songs like “Prom Days” is that the bars sound even more punched in than Wright’s, only without Young sequencing them into something like a flow.

It’s almost like Teejay never heard a rap song before he decided to pursue a rap career. The storytelling of tracks like “Flint Water” has promise as Teejay brags about all of his different hustles, trafficking items from Xbox consoles to Louboutin shoes, and it’s downright funny when he interjects lines into the rap like “Fuck if yo’ bitch calling my phone, keep this beat going.” If he was a natural on the mic this would be highly compelling. The truth is different. The instrumental tries to steer him in one direction and his awkward delivery swerves wildly across the median, forcing literal punch-ins where his vocals are electronically stuttered before a restart.

There’s good news about “Crime Pays” — it’s free. Perhaps that’s apt for a rapper whose whole persona is about coming up on fake credit cards and identity fraud. “I can teach you how to get some money if you focused” brags Teejay on “Convo,” the album’s longest song thanks to a guest appearance by 10kkevv. Coincidentally or not it’s also the one song here that would be worth paying for. The narrative even includes the fact they are discussing their grift on burner phones, meaning that if Teejayx6 isn’t living the life he so freely raps about, he’s certainly watched enough movies and “Breaking Bad” style TV shows to know that you never want to leave a digital trail of breadcrumbs that can be traced, tapped or triangulated.

I think Teejayx6 is an interesting young man, whether or not he was ready for the instant fame that garnering such press gave him, and that “Crime Pays” hints at his potential. Eazy-E had potential too. He may not have been ready to be a rap superstar when N.W.A first blew up, but over time he gained confidence and became better. The movie undoubtedly exaggerates his lack of ability for a dramatic narrative, but by his solo album he had clearly improved as a rapper, perhaps in large part due to coaching from O’Shea Jackson. “Ice Cube writes the rhymes, that I say” professed E in a moment of frank honesty. Teejay may not need a writer, but he needs a coach to make him develop into a better emcee.