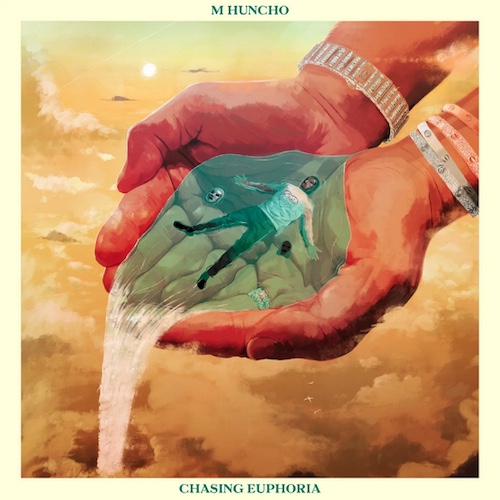 M Huncho is a bit of an enigma. In almost every picture of him you see he’s wearing a mask, to the point that “face reveal” is a common result when you type his name into a search engine. I also don’t know his birth name and that too seems to be his choice to keep it obscure. Something pierced the air of mystery around him though — his accent. Even though he uses the same vocal modulation and pitch correction common to U.S. rappers today, the pronunciation of words clearly gives away that he’s British. When he has guest stars like Headie One on “Warzone” there’s no doubt whatsoever.

“Chasing Euphoria” is a revelatory album even with his identity so carefully hidden. In the end all the signs were there. His frequent use of the word man should have been the first clue. Even with cultural differences like that there are more things in common than not. You can attribute that to the global nature of hip-hop culture, or the fact that the forces that shaped hip-hop’s rise (poverty, disenfranchisement, systemic racism) are the same wherever you are.

“In the foreign whip/and I’m a foreigner/Police see me cruising/they love to follow us/They say we got the guns/they say we got the drugs.” Same story, different country. “Doomsday” shows just how universal some things are. What isn’t so ubiquitous though is how easy M Huncho is to understand. I’m used to AutoTune rappers distorting their vocals to the point they don’t make sense, and some of them are so heavily medicated while rapping that their slurred delivery would be nonsense without it. Huncho on the other hand comes through crisp and clear. He also has a different musical vibe than his American contemporaries. “Pray 2 the East” (featuring BNXN) is like going from heavy metal to jazz. It’s refreshing.

It’s been a good minute since I’ve enjoyed a trap rapper this much. M Huncho acknowledges a past history of hustling to make ends meet, then sincerely thanks the fiends who copped from him for showing him that wasn’t the life he wanted. He’s also got some straight up amazing production. I wasn’t surprised to hear the drop “la musica de Harry Fraud” in the middle of “Slight More Rain.” This is a UK rapper who is sincerely trying to make inroads into the US market, and if he’s going to do so by enlisting superb beat maestros, why would you complain?

He hasn’t eschewed his local contemporaries though, and you can see that respect when he collaborates with Giggs on “Lean.”

Usually self-described trap rappers produce albums that are incredibly short, but for his first Island Records LP “Chasing Euphoria” M Huncho dropped a project that’s over an hour long. I’m almost tempted to say it’s too much. There’s a happy medium between albums that are under 25 minutes or over 70 minutes. Can we split the difference? The good news is that Huncho eschews most of the cliches of the genre. He’s not overwhelmingly negative, depressed or violent. He’s a bit misogynistic, but that is probably unavoidable given rap has a “bro culture” a lot of the time. I’m not making excuses for him, I’m just not mad about it, because aside from occasionally saying he wants his dick sucked he’s far from the worst in the field. On the whole M Huncho is one of the best, which may force American emcees to step up their game to not be shown up by their British counterparts.