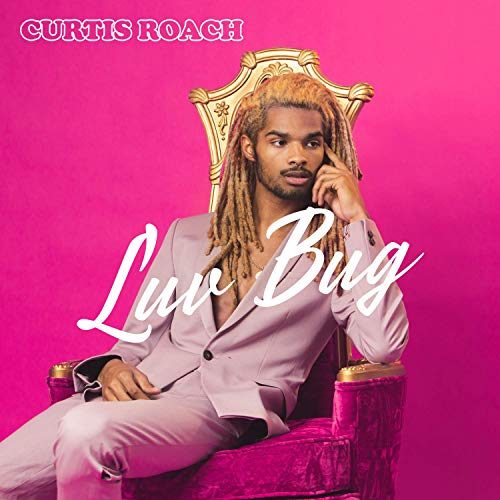 Curtis Roach hails from Detroit. From the interviews I’ve read and information I’ve gleaned (mostly social media spots) he’s a young man of about 20 years in age, though he could be 21 by now since he was born “in 1999” and I don’t know his exact birthday. I don’t need to know for the purpose of reviewing “Luv Bug” anyway, but when an artist from the D that I didn’t know previously drops in my lap, I try to find out a little more info. I still have affection for Eastern Michigan even though I only lived there for a few years over two decades ago. A little part of my heart is always going to ride for J Dilla (R.I.P.) and the Detroit Red Wings. It’s a part of my DNA now.

The result of my investigation starts and ends with the same conclusion — Curtis Roach is a very polished young artist. He’s got all the essentials for future success including his own website, almost 20K followers (as of this writing) on Instagram, and a four track EP that perfectly reflects the contemporary crossover sound of the late 2010’s. Heading into a new decade the rapper who sings as much or more than he raps doesn’t feel like a thing that is going to go away, it’s here to stay, and it’s become so normal that it doesn’t even feel weird to hear him croon “I swear this shit is nothing to me” on the aptly titled “Nothin'”. I didn’t even realize he was cussing until I ran it back. There was a time where that distinguished singing rappers from their R&B counterparts, but R&B itself has gotten much more coarse over the last generation. Singers wanna be rappers, rappers wanna sing.

Going back to that affection for the D for a minute — when I lived closer to Motown I had the feeling it was an underrated musical scene and I’m sure it still is even now. New York and California both have this ability to overshadow the rest of hip-hop, though the rise of Texas, Georgia, Missouri, Florida and Tennessee have brought some much needed balance to what someone outside the U.S. could think of rap as. You may know Jay-Z and Kendrick Lamar, but odds are you know Migos and Rick Ross too. So yeah I’m always looking for that next artist from Michigan generally and Detroit specifically to say “We here too” and put the whole scene on their back.

“Luv Bug” is a nice little (12:00) EP, but Curtis Roach won’t be that dude. There’s absolutely nothing wrong with that. It’s on me that I pin my hopes on people from the area to hold it down as next level rappers, producers, and creative cats in general. Roach has his own aspirations. He cites his own inspirations as ranging from Missy Elliott to Maroon 5. His slickly produced, carefully cultivated release reflects that. This isn’t scene music. It neither inspires others to follow him nor shows anything other than a general sensibility for pop friendly music. He’s a Post Malone in the making without the following… yet. He’ll probably get there because everything about him feels like an unseen hand shaping him into a mold to make it as a commercial artist, even if the hand is actually his own. He’s not an angry young man, nor a brooding young man, nor a complicated young man. He’s just a singer/rapper who sings more than raps. He is what he is.