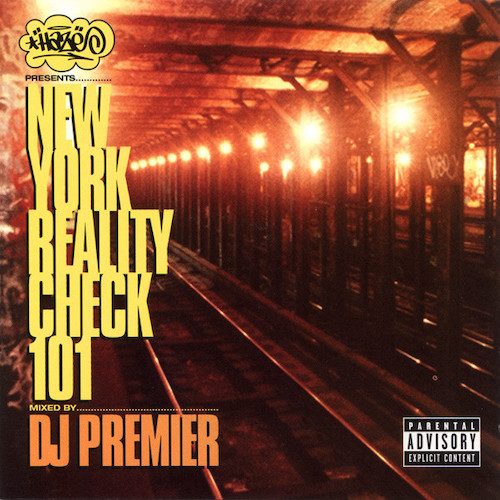 “We searched high and wide, far and low, and we got all the butters here. This is the best of the independent that came out.” – Mr. Dave

“Haze Presents NY Reality Check 101” came along at an ideal time in my life. I was already a hip-hop writer, a college radio show host and a (really lousy) disc jockey who was married to the elements. There was no “I USED to Love H.E.R.” in my life — I had been smitten in my pre-teen years and that love only grew in my teens and 20’s. It was not an easy relationship though living in a very rural part of America. Without magazines like The Source, newsgroups like rec.music.hip-hop, and friendly record store managers (whattup Dean) who would place special orders for me, I’d have been ass out trying to keep up with the scene. “NY Reality Check 101” was one such order in December ’97. You weren’t going to find this album at Walmart.

It’s amazing how an album that was transformative and revelatory to me in the late 1990’s has vanished without a trace a little over 20 years later. You can find an entry here or there with artwork or a release date, but scant little discussion of how amazing this CD was. In a way having a college friend from Philadelphia (whattup Ron) prepared me well for its arrival. It was through him that I got my exposure to the mixtape scene, so I was already listening to compilations from Ron G, Kid Capri and DJ Premier, “P-P-P-Premier” of Gang Starr fame among others. The latter is the man behind the wheels here, and although it’s Haze that “Presents” this mixtape, his presence is basically non-existent. Primo is the one who mixes, blends, juggles and doubles the tracks, scratching up a bevy of what Dave Sumpter a/k/a Mr. Dave aptly described as “the butters” of underground rap.

To this day Primo’s slice and dice of Bigg Jus saying “Bugged like Rwanda” over and over for the intro of Company Flow’s “8 Steps to Perfection” makes the hairs on my arms stand up. “Reality Check 101” was when I discovered Company Flow and by extension Rawkus Records, and hearing it again reminds me of that incredible feeling. Yeah eventually Ron or someone in the know would have hipped me to CoFlow if it weren’t for this CD, but the butter is just spread so smoothly here that I have to toast Premier. If you try listening to this on Spotify or YouTube it’s really not going to do it justice with the buffering, commercial breaks and constant interruptions. The way Primo flowed the song into “Changes” by Shades of Brooklyn made me a huge fan of BOTH acts. You better believe I was immediately trying to cop twelve inch singles for each one.

These days a “mixtape” is no more than a promotional tool for both aspiring and established rappers to give listeners free copies of their songs, but in this era a “mixtape” was truly your chance to discover something fresh and new while appreciating the quality of the selections and artistic direction of the deejay in charge. That direction is set in concrete by J-Live on the album’s opener “Braggin’ Writes.” He’s had 23 years and change to fill our lives with hip-hop classics ever since, but that wouldn’t have been possible if he wasn’t so far underground at the time that Haze, Primo and Mr. Dave had to get out a diamond tipped drill. “My style’s been developed at the core of the Earth/the exhale’s volcanic/the inhale is seismic” brags Live and HE IS NOT WRONG. Hip-Hop was shook by Live’s skills and the landscape was forever changed. Nothing has been the same since.

The distribution of wealth throughout the 18 tracks on this album is simply ridiculous — gem after gem are unearthed and polished by Primo’s precise facet cuts. The shame of “Reality Check 101” is not just that this album has largely been forgotten but that so many of the acts featured on it weren’t able to use it as a launching pad to fame and fortune. J-Live and Company Flow obviously fared well, and Mr. “Head Over Wheels” himself G-Depp was the biggest surprise of the entire crew when he signed with Bad Boy. What happened to L the HeadToucha though? “Too Complex” was musical and lyrical perfection. Street Smartz scored a beautiful cameo from O.C. on the certified banger “Metal Thangz.” And when it comes to those hair raising hip-hop moments, “Lyrical Tactics” by Natural Elements still gets me EVERY, SINGLE, TIME. Why did they not become huge superstars?

Every single selection made by the parties involved was a wise one, and even when they could have phoned it in near the end, they still hit us off with Choclair on “21 Years” and Finsta Bundy on “Feel the High Pt. 2.” I’ve never even heard part one and that STILL bugs me decades later. I can only remember ONE appearance from F.B. beyond this album and I swear that’s a crying shame. What isn’t a shame though is the simple fact that “Haze Presents NY Reality Check 101” exists, and if you try hard enough, you might just be able to get a physical copy on vinyl or compact disc. If the price seems exorbitant when you find it trust me — it’s worth every penny.