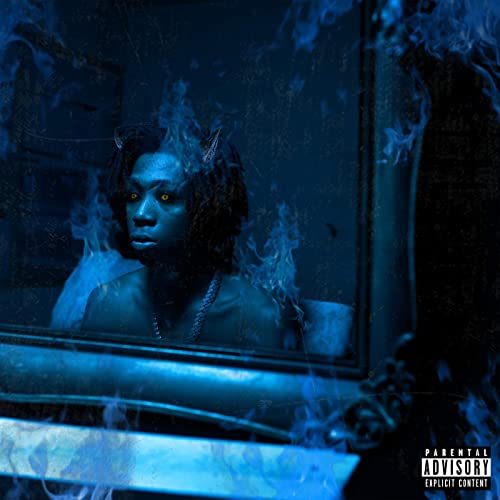 A Demon in 6lue

Primary sources for information about Lil Loaded are hard to come by despite the fact he just dropped a full length album called “A Demon in 6lue.” He’s got Instagram and Twitter of course (the former is verified, the latter is not) but those would be self-promotional and biased in his favor. The most I could find about him was on an alternative Wikipedia site, where I learned his real name was Dashawn Robertson and he was born in Dallas, Texas on August 1st, 2000. If any of those facts are wrong he should contact them and set the record straight. They also say his career first blew up with the song “6locc 6a6y” and judging by the 21 million views the video has at this writing, that part is definitely accurate.

It’s also fairly obvious that he’s Crip affiliated, and not just from his love of the color blue or his repeated use of 6’s instead of B’s, but from the fact he released a mixtape with Wali Da Great called “Crip Shit” last year. That’s definitive with or without a Wikipedia page. “A Demon in 6lue” is thus in furtherance of his viral success, his public persona and his sworn affiliations, all of which should be taken into account when learning what the young man is all about. Songs like “6locc 6a6y Ways” (“Blocc Baby Ways”) are par for the course for Lil Loaded. He talks about growing up with “hard times” that made him what he is, vowing that “the block made me [and] the Glock saved me” on the streets of the D.

Typical Lil Loaded songs also tend to be on the short side, often under three minutes in length, with longer tracks like “Every Time We Step” padded out by an opening instrumental and a chorus used as an intro. It’s a simple but effective track musically — quiet keys, strong bass, a nice drum tap and Loaded’s vow to “use fo’ flows in one verse, now that’s some type of talent.” I wasn’t counting the number of styles, but he does seamlessly flip back and forth between rapping and ‘Tuning, so that’s two for sure.

“Woken Dreams” makes Lil Loaded’s points succinctly in one song. He talks about his haters, achieving his goals, and defending what he’s gained at all costs. “These niggaz hatin, cause I always keep it real/I ain’t never had to lie or suck no dick to get a deal/They really love my talent, I do this shit for real/If a nigga play with me or mines — nigga getting killed.” He also vows to have hitters who can do that work for him if necessary, and vows to do the same for them because he’s 100% loyal and “no snake.” The surprising part may be that he reaches out beyond his set. “Bloods rocking with me, but my Crips they on my side.” Bridging the turf was a hallmark of the late Nipsey Hussle so I can’t say it’s unwelcome for Lil Loaded to do the same.

“A Demon in 6lue” includes bonus remixes of the aforementioned “6locc 6a6y” and another previous track “Gang Shit,” which is another track where he tries to make the case Bloods and Crips have more in common (“Dance to this bitch if you gang/I don’t give a fuck if we don’t bang the same”) than not. “We all still the same, we got Glocks with extensions.” Is that enough for peace and unity in the community? That would be naive. If you know anything about the history, sets from the same side don’t even necessarily get along with each other in the same city, let along from other area codes. As noted though there have been rappers who have made the effort to promote gang unity — I’m just not sure it comes from everybody packing the same pistols. That seems more likely to spark violence than to end it.

Having come into this review with almost no knowledge of Lil Loaded, I can admit that “A Demon in 6lue” surprised me a bit. He flexes with pride and wears his colors on his sleeve, literally painting himself blue for his album cover photo shoot, but it seems like he offers olive branches to any new listeners who aren’t Cripping like he is. He’s also an example of finding success in non-traditional ways as evidenced by “High School Dropout,” but even though that’s commendable I’m not here to endorse NOT getting an education. Having a song go viral and turning it into a rap career is a literal million to one shot, and just because Loaded pulled it off doesn’t mean you’re going to get the same success he did even if you put in ten times the work. The music industry is patently unfair that way. I hope Lil Loaded will remember that going forward and invests in his future while reminding listeners they have more in common than they have differences.