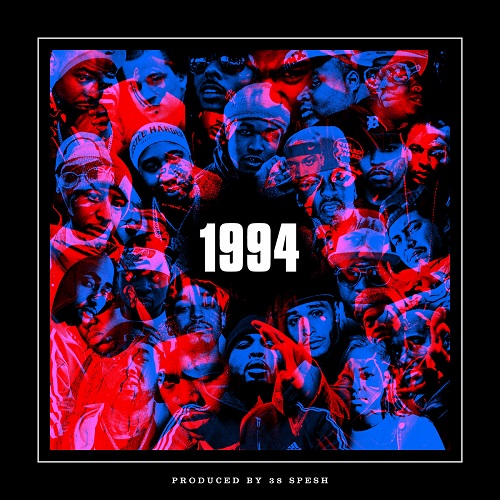 Che Noir dedicates the finale of her Apollo Brown album to it, the year 1994 in hip-hop – or rather she chronicles her relationship with rap music beginning with her year of birth and goes from there with nods to the formative artists and albums of her youth:

“April 19, doctors say, ‘It’s a girl’
In ’94 Illmatic dropped the same day I came in this world
My mother said, ‘The world is yours’, she was givin’ me game
It’s only right I take a trip down memory lane”

Many would call 1994 a great year for hip-hop, Che Noir’s growing fanbase perhaps even for the fact that it happens to be the up-and-coming micstress’s year of birth. Her mentor 38 Spesh organized a collective dedication to 1994 in 2019 in the form of 13 tracks named after vintage classics. While these are not cover versions, the originals regularly resound through the reconstructed beats. For his 2018 update of Kool G Rap’s “It’s a Shame”, Spesh relied on the original by Naughty Shorts, a year later he was reproducing period beats – not to turn them into YouTube tutorials but to revisit an era that brought forth iconic songs and artists.

While we all know that you can’t rewind time, then as now there are those who dwell in the dungeons of rap, which, as coined by one of those iconic artists, is not some mystical place but that space where creative ambition and existential hunger breed uncompromising Rhythm And Poetry. 38 Spesh has an ear for that constellation, and he summons always a minimum of two voices onto each track. RJ Payne and Che Noir kick off the proceedings with “NY State of Mind” with no particular regard for the original except for the general attitude, which simmers with the same resolute matter-of-fact posture that made rap initially so undeniable. To quote Che: “I’m not a flashy type of chick, I’m too rugged to date a rapper / or these bum-ass niggas that y’all bitches be chasin’ after”.

“1994” has no shortage of rugged raps. They echo not just original statements (from Fred the Godson’s “The streets is watchin’, I move accordingly” to Jamal Gasol’s “We could trade places, gettin’ lifted in the staircases”), but clearly want to be part of a renaissance, as small as the chances may be. Grafh wants “more DJ Screw instead of DJ Khaled”, adding on “Bring the Pain”, his veteran reunion with Cory Gunz: “I am Marcy Projects bricks in a suitcase, Jay-Z / You can’t New Age-play me when Kool-Aid raised me / I’m from the era where the fiends used to two-way page me”.

Standing in the way of a full-blown renaissance of the so-called golden age is the limited subject matter of its progeny. Sure, the limitations don’t stand in the way of standout performances from Grafh, Rain 910, Ty Farris, Street Justice or Reef Hustle. But when Rim Da Villin and Hus Kingpin turn Organized Konfusion’s tense “Crush, kill, destroy, stress” chant into “Weigh, bag, sell, count” on “Stress” or 38 Spesh invites Griselda’s Benny and Conway to closer “Never Seen a Man Cry” for yet another round of boss talk, you have to wonder if these guys actually learned anything from 1994. In the end, “1994” is most akin to a mixtape where up-and-coming street rappers jack famous beats for their crack tales, harking back to the times of G Unit, Re-Up Gang, etc.

Arguably, some songs lend themselves better to reinterpretations because they are more general in nature, and with “Born to Roll” being Masta Ace’s most universally recognized song, this one works well, also thanks to the presence of the nationwide connected Ampichino (starting off with a classical Schooly D/Gucci reference), with G4 Jag explicitly shouting out the originator as an added bonus.

The man behind the boards, 38, naturally bites off more than he can chew. Beatmakers shouldn’t even dream of trying to copy ’94 Premier, yet he still picks four beats. “Mass Appeal” gets the pass thanks to an inserted flute, “Supa Star” sounds fresh in its own way (but only in its own way), while “Come Clean” and “NY State of Mind” are probably too close to the real thing without being the real thing. “Most Beautifullest Thing in This World” sounds more like “Big Poppa” than Erick Sermon’s creation, after Fred the Godson’s 2013 version at least the second instance where the Isley Brothers sample isn’t properly reworked into the Keith Murray tune. The production fares actually best when it assumes a character of its own, such as on “Warning” or “Rugged Never Smooth” (original M.O.P. spelling: “Rugged Neva Smoove”), which works as a whole despite being all smooth and no rugged.

38 himself puts the project in perspective a couple of times on “1994” with ad-libs that underline its informal character. He’s the coach motivating the underdogs by going back to the basics of the sport. The wins come later. But everyone involved should take to heart Che Noir’s quip about commercially successful competitors: “What the fuck these rappers famous for? It can’t be the music”. The music really is the crucial point for both vets and rookies, first-stringers and bench warmers. Rap music that will be revered 25 years from now.