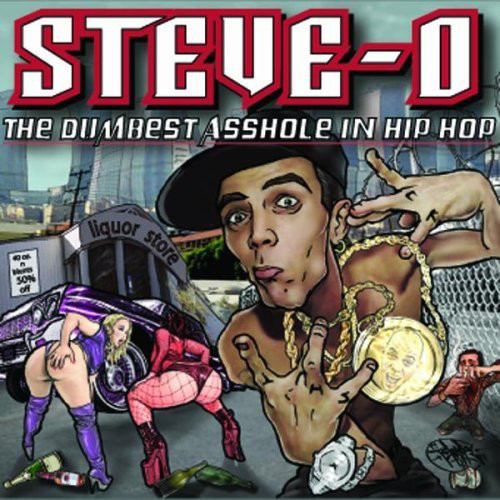 The Dumbest Asshole in Hip Hop

Stephen Gilchrist Glover will tell you point blank it’s a miracle he’s still alive today and he’s not exaggerating. The self-described “Dumbest Asshole in Hip Hop” was for a period of time the dumbest asshole on television. If you know who he is you know him best as Steve-O from Jackass, a MTV show that spawned a slew of movies and a series of spinoff shows. It wasn’t HIS show but it might as well have been. Any time you wanted to watch an undeniably insane person do some incredibly dangerous stunt, Steve-O was the man you could count on. The risk of injury meant nothing to him. He’d jump off a roof butt naked with bottle rockets shooting out of his ass if you dared him to.

Unfortunately it takes a whole lot of drugs and alcohol to get yourself into a mentally incapacitated state where you don’t care what happens next. Maybe that’s true in reverse too — if you do a lot of drugs and alcohol you’re self-medicating for depression and couldn’t care whether you live or die. Either way what happens when you film dangerous stunts where you break everything from your big toe to your skull? That’s right — MORE DRUGS. Drugs for the surgery. Drugs for the pain. Drugs, drugs, and drugs. Steve-O did a lot of drugs, and on “The Dumbest Asshole in Hip Hop” he’s damn proud of it. There are only two topics Steve-O has to talk about as a rapper — doing drugs and poking puss.

I’m not sure how or why hip-hop legend Kool G Rap agreed to record “Poke the Puss” with Steve-O. Maybe he was a fan of the antics from the movies and the TV shows, but either way he’s the only person rapping on this song. Steve-O just randomly spouts off gibberish, although to his credit some of it is amusingly self-deprecating, like the line “Just kidding. I suck in bed!” That’s one of the charming things about Steve-O, both before and after he found sobriety — he never takes himself too seriously. He might be “The Dumbest Asshole” but he’s not a PRETENTIOUS asshole, and that’s worth something.

No matter how high or loaded he had to have been at the time of recording these songs, he’s still self-aware on the interludes that people only want to hear Steve-O rap because it’s funny. Honestly who wouldn’t? Steve-O is a funny dude, and he’s got a raspy voice like a 90 year old who has been on a diet of nothing but Cuban cigars and cuba libres. It makes him an excellent story teller now that he’s sober, because you hang on every crunchy word, but it wasn’t going to make him a good emcee then or now. The value is just in marveling that he was so loaded he thought any of it was a good idea.

It’s going to sound to most of you like I think Steve-O made the most accurately titled album in history with “The Dumbest Asshole in Hip Hop.” You might even get the impression I hate him or think he’s literally a jackass. Actually I think Mr. Glover is an inspiring dude. Anybody who failed rehab as many times as he did but kept at it until he reached a stable point of sobriety and contentment is fucking amazing. I’m a fan of his YouTube channel, the charity work that he does, and his ability to laugh at the dumb shit he used to do. You don’t need me to tell you this was a terrible idea and a terrible album, he’ll happily do that himself (see below), but I’m a fan of this record just because it exists. It’s AWFUL but it’s so bad that it’s fun to listen to, which is something most mediocre AutoTune rap albums aren’t. In a world of records that all sound the same this one stands out.