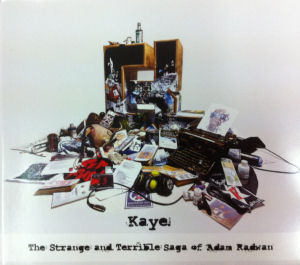 Kaye :: The Strange and Terrible Saga of Adam Radwan

There are very few double albums that wouldn’t have been improved by cutting them down to a single disc. Even the best double albums are sprawling, disjointed affairs: The Beatles “White Album,” Bob Dylan’s “Blonde on Blonde,” The Clash’s “Sandinista!” Husker Du’s “Zen Arcade,” etc. Hip-hop has an even worse track record with double albums. Biggie’s “Life After Death,” 2Pac’s “All Eyez On Me,” “The Wu-Tang Forever” all would have been better pared down to a single album. The one exception is the Outkast’s “Speakerboxxx/The Love Below,” and that is basically two solo albums sold together.

So imagine my skepticism upon receiving Australian rapper Kaye’s debut album. Not only is it a double disc, it is based on the writings of gonzo journalist Hunter S. Thompson. Thompson, along with Charles Bukowski, is responsible for mountains of terrible writing made by young men who think that all you need to be a good writer is be an alcoholic. Writing 32 raps wasn’t enough for Kaye, however. He had to go and produce the entire thing as well. No one can accuse him of lacking motivation.

The album is divided into two discs. Disc One is titled “Fear and Loathing in Lost-Pages,” a play on Thompson’s “Fear and Loathing In Las Vegas.” The songs here are more uptempo and light-hearted. Disc Two is titled “The Redrum Diaries,” a play on Thompson’s “The Rum Diaries.” The songs on that disc are darker and more introspective. Kaye uses the album to turn the emotional and psychological turmoil in his life into music. This includes but is not limited to drug and alcohol abuse, bad relationships, suicidal thoughts, and general ennui.

The first disc is an all-out assault, with Kaye and friends rapping like they are a week into a drug and alcohol binge. The self-described Mr. Never Did Right raps about getting wasted, getting rowdy, getting laid, and getting bummed out about the whole process. It’s drunken frat boy mixed with a dose of self-loathing, full of obnoxious lines like “My milkshake brings all the girls to the yard/Damn right it’s better than yours/Damn right bigger and fresh are my balls/Wet are my balls cuz she licks on my balls.” Kaye’s saving grace is a vein of paranoid introspection that permeates even his rowdiest party tracks. “Where You At (Part 2)” has a latin beat, but Kaye is rapping about partying in hell, dropping lines about the Israel/Palestine conflict and the holocaust. “For Your Love,” which samples the Yardbirds song of the same name, sounds like a drunk dial by a man who is battling his need for sex, drugs, and real human connection. Prem Bedlam and Kaye drop genuine romantic sentiment in with their pleas for less wholesome activities, drawing the line between Romeos and porn stars. He’s a little like Danny Brown in that his off-the-chain persona holds the shadow of something much darker and more disturbed,and every once in a while you see the damaged man that the drugs are trying to cover up. The beats on Disc One mirror this tone, with loud boom-bap drums tempered by piano loops, and samples of foreign songs. He also goes in a psychedelic direction with “Fear Of Loathing,” rivaling Redman in delivering a hip-hop acid trip.

Disc Two goes further into the introspective end. The beats are more muted,the drums quieter, with acoustic guitars and pianos in the background. Kaye doesn’t yell his lines like he does on the first disc, going for a more subdued delivery. The subject matter is even more personal. He raps about failed relationships, being suicidal, and being full of self-doubt. “The day feels like night without love in my heart and by my side,” he raps on album closer “BK.” “9-5 hopeless, now you know why I smoke this.” He also gets political, skewing the government with a cynical eye. Disc Two is a nice contrast to the druggy boisterousness of Disc One, and paints a more human picture of Kaye.

While I admired Kaye’s mix of honesty and swagger and his incredible work ethic, “The Strange and Terrible Saga of Adam Radwan” didn’t cure me of my prejudice against double albums. At 32 songs, it’s too long. It could have easily been chopped down to one disc.Instead of demanding two hours’ of the listener’s time, Kaye could have said what he needed to say in forty-five minutes. The double-disc length shows lack of editing as much as ambition, and it ends up being a weaker listening experience because of what got left in. Having 16 songs on each side that all follow a similar musical and lyrical theme leads to several songs that sound the same. The rowdy vibe on Disc One becomes grating by the end, while the somber mood of Disc Two gets sleepy by track twelve. In the end, Kaye has given us a debut that shows us that he is a prolific artist not afraid to bare his soul or take chances. There are enough highlights spread out on these two discs to make it worth checking out, but only the faithful will want to join Kaye for the entire journey.