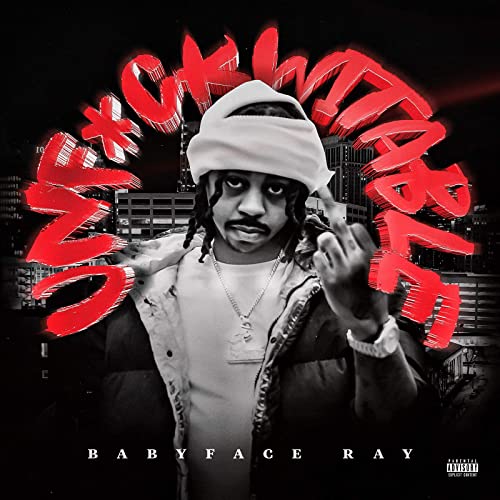 If you search for Babyface Ray on supposedly authoritative encyclopedias, all you can find is singles he did with 42 Dugg and Sada Baby. That led me to think Ray was a Detroit rapper, which turned out to be a very accurate guess. The first interview I found with Ray was titled “Babyface Ray Is the Voice of Detroit.” Ray’s real name is Marcellus Register and he’s a certified East Side resident who by his own account has been rapping so long “there was no videos back then,” which I can only assume would mean YouTube. Given he’s in his late 20’s now he’s definitely old enough to remember a time before YT came into existence back in 2005. You won’t have any problem finding him on there now.

Back in ’05 it might have been an impediment to your career to call your major label album “Unfuckwitable,” but these days your entire career can be digital without having to press a single CD and release it in stores. EMPIRE didn’t have any problem distributing Ray’s release under that name. In fact on the single “Like Daisy Lane” Ray brags about that strategic link up. “Appreciate them EMPIRE checks, but we done blew those.” He’s also addressing those envious of his success: “You should get a raise/you been on the block for years/man, you niggaz lame.” Ray definitely has the swagger of a rapper who has been hustling for years to be in this position, and on the visualizer for “Allowance” he’s got a middle finger up to the haters.

True to his roots in the D, fellow rapper Kash Doll guests on the track and trades freaky verses with Ray. She’s as frank as Nicki or Megan on the song: “Pull it out and I’m a suck it for you like I miss you/I might even let you launch that shit like a missile.” It’s slightly contradictory that both artists are equals lyrically and sexually on their bars when the hook has Ray saying “You a bad bitch, bad bitches get allowance.” I don’t think Kash Doll needs a stipend when she’s clearly doing well on her own — and unlike Ray she’s got an entry on that supposedly authoritative encyclopedia. The other guest appearances of the album are EST Gee on “Pink 10’s” and Moneybagg Yo on “If You Know You Know.”

This is my favorite track off “Unfuckwitable.” There’s a pleasing old school feel to the stripped down instrumental, and Yo’s deep Memphis flow is an excellent contrast to Ray’s gravelly Detroit demeanor. That’s the one thing that keeps me from liking Ray more than I do — the raspy delivery. I’m sure that’s beyond his control. He was either born that way, had throat polyps that required surgery, or just developed it over time breathing in that cold Motown air. Take my word as someone who used to live in Eastern Michigan when I tell you that COLD WEATHER takes on a whole new meaning when you’re surrounded by three feet of “lake effect” snow.

The positives for me are that Ray has a good flow and is clearly serious about his rap career. This isn’t a dude who got fucked up on some cough syrup, hit the studio to lazily mumble his way through a freestyle, then let some producer clean it up with AutoTune later. You’re hearing his real voice and his real thoughts, and he’s not trying to hide how raspy it can be in his raps, so I respect that about him. It’s not nearly as grating to the ear as Drakeo the Ruler so I can fuck with “Unfuckwitable” for the most part. My only desire would be for him to step up the production a little bit more. The voice is the voice either way but he can go whole hog on some bigger beats to make that shit shine the most.