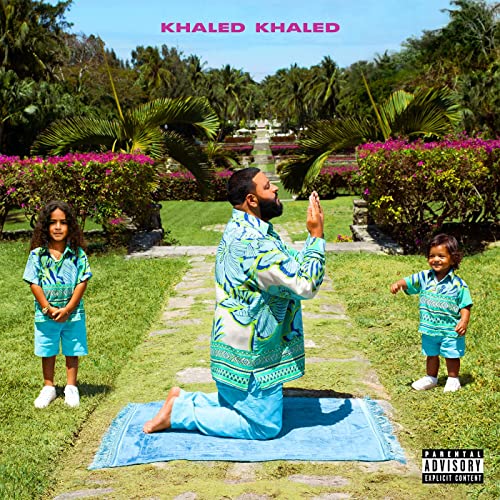 “KHALED KHALED” is DJ Khaled’s 12th major label album, but it’s his first self-titled album. If you didn’t know that Khaled was both his first and his last name, now you do. The album was kicked off last September with the single “POPSTAR” featuring Drake followed by a video with Justin Bieber.

The song was produced by OZ, who also did the single “Toosie Slide” from “Dark Lane Demo Tapes.” As it has since the earliest days of his rise up the charts, this raises the question about what sort of DJ Khaled is. He isn’t a turntablist as you never hear him scratching samples or juggling records. He isn’t an instrumentalist as he rarely ever produces a song on his own, although he’s certainly not above taking a co-producer credit on “KHALED KHALED” when other people do the work. Example — Tay Keith (fuck these people up) does three tracks on this album including “Big Paper” featuring Cardi B, but Khaled must have earned his share just for saying his name, “We the Best Music” and “another one” repeatedly. How that equates to production though I can’t begin to tell you.

The only conclusion I’ve ever found satisfactory is that DJ Khaled is a “mixtape deejay,” or if you want to upgrade the title slightly he’s a “hot music selector.” Khaled doesn’t rap, he doesn’t scratch, but he does produce in a way… he produces HITS. If you turn on a FM stereo in your home, your car, or over an internet stream right now, there’s a very good chance a “DJ Khaled featuring (insert famous rap star here)” song will be playing. He’s extremely well connected in the industry, he’s clearly a friendly affable guy who loves to network and socialize, and both respected veterans and new artists alike know that appearing on a Khaled tracks is a ticket to success.

It’s that kind of clout that enables him to pull once bitter rivals Jay-Z and Nas into the same video on “SORRY NOT SORRY” with crooning from James Fauntleroy and harmonies by The Hive. Long time Khaled collaborator StreetRunner makes this one extra melodic and syrupy, so whatever you may say about Khaled as a DJ, you can’t say he doesn’t know talent when he hears it. Matter of fact Cool & Dre are one of the most consistent teams in the game when it comes to lacing beats, so I was kind of surprised when I heard “WE GOING CRAZY” and immediately recognized it as “Dey Know” by the late Shawty Lo. Obviously they just pulled the same sample (Mandrill’s “Children of the Sun”) and pitched it differently, but it feels… kind of lazy? Not what I’d expect from Cool & Dre.

I felt the same way hearing “Layla” by Derek and the Dominos on “I DID IT.” Yeah Tay Keith — you, Zarillo, DJ 360 and even Khaled certainly did it. It’s not as if either of these are bad samples to use in a song, they’re just overly familiar and easy to pick out immediately. A little subtlety in selection goes a long way, which is why it’s much harder to identify the exact same record on G-Eazy’s “All Day” or Atmosphere’s “My Lady Got Two Men.”

I must admit though that asking for subtlety on “KHALED KHALED,” purposefully stylized in ALL CAPS like MF DOOM is asking too much. Like Puff Daddy a/k/a Diddy or P. Diddy before him, Khaled has made you know who he is by saying his name all over the tracks. I’m neither for it nor against it in his music, it’s just his identifiable signature, so you always know when you hear it on the radio it’s “another one” from DJ Khaled. Like every Khaled release from the 2000’s to now, he’s loaded this album up with guest stars — even the aforementioned Sean Combs is on “THIS IS MY YEAR.”

Ultimately the album gets away with overly familiar breaks thanks to the superb level of stars. Maybe “JUST BE” featuring Justin Timberlake will immediately make you think of Ghostface Killah and Mary J. Blige’s “All That I Got Is You” thanks to the Jackson 5 sample, but that doesn’t mean Timberlake isn’t singing the heck out of the StreetRunner track. Hey if they’re all clever about it they could just do a remix featuring Blige and Ghost, and put Khaled on it to say “another one” like he always does. That’s what I can say about “KHALED KHALED” too — it’s another one. It’s not his best compilation, it’s not his worst, but it’s another one. Respect to him and his growing family and may they continue to be blessed.