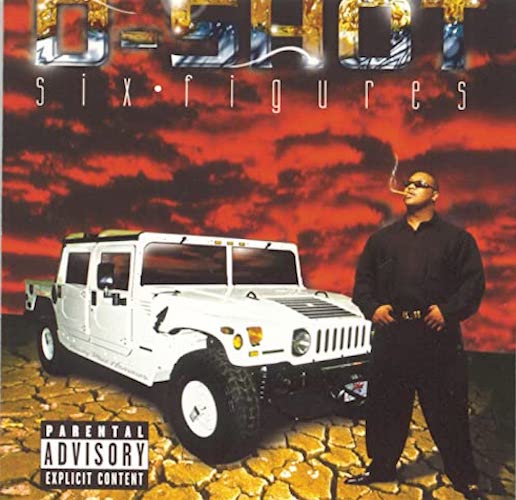 If you remember one song by D-Shot it’s “(I’ll Be Yo’) Huckleberry.”

To be realistic even the chances you remember this song are a stretch. It got a video due to the fact it was featured on the Booty Call soundtrack, which could only be called a “soundtrack” in the most generous sense. The truth is that it was a compilation of artists signed to Jive/RCA from 1996-97, which meant we got the incongruous lineup of R. Kelly, KRS-One, SWV, E-40, Backstreet Boys and Too $hort all in the same place at one time. I’m not reviewing that one today but suffice it to say when you have a movie about booty calls with a soundtrack where KRS-One is telling you to “Plan Up Your Family,” the whole thing is a mess.

D-Shot has always been the most forgotten member of The Click. There’s nothing wrong with him as a rap artist, but he easily gets overshadowed by his own family. E-40 is a slanguage master and certified rap superstar, B-Legit has a deep booming vocal tone, and Suga-T’s vibrant delivery is there to sprinkle game on any song. D-Shot is just “there.” It’s pretty obvious from listening to his second solo album “Six Figures” that he knows this too. It’s heavily loaded with guest features to give him an excuse to not carry the whole presentation on his own. The second and only other single off the album is “True Worldwide Playaz” and owes most of its success to Spice 1 and Too $hort (with a minor credit to Bo-Roc).

“Six Figures” makes the most of how connected and respected E-40 and his Click were to create a solid LP. Rap crooner Levitti appears on four songs including the title track. Vallejo legend Celly Cel appears twice and is also on the signature song. Much like the aforementioned soundtrack a lot of the cameos have Jive/RCA ties, which explains Todd Shaw’s cameo and both G-Note (“Is It Cool to Fuck”) and Mac Shawn (“One More Shot”) of the Funk Mobb being here, though I can’t think of anything that explains Mr. Malik from Illegal (he’s the lesser half compared to Jamal) joining the mix.

Although the production is solid throughout, it’s telling that three out of 13 total tracks are skits, interludes or instrumentals. Just listen to the “Reversal Interlude” that caps off the album and you’ll wonder why someone ISN’T rapping over it. This is some smooth 1990’s West coast funk. I bet artists rolled up into KMEL and asked Sway & Tech to throw this record on just so they could freestyle over. This track seriously needs an emcee. Why would D-Shot throw away HIS shot to rap on it himself?

I’m sure the answer is that D-Shot really wasn’t that comfortable being a solo artist. When three fourths of The Click unite on “Duck” (E-40, B-Legit, D-Shot) not only does it feel like a Click track, it feels like D-Shot is in his zone musically and lyrically. “Enhancing my skills by using my brain” quips Shot, and he was definitely smart to share the spotlight with his family.

D-Shot released six solo albums from 1994-2012, but “Six Figures” was the last one to chart on Billboard. You don’t have to take my word for it when I say that D is the most forgotten Click member, because the numbers he did speak for themselves. That may be unfair to him given the outsized personality of the other three, but that would be just like saying it’s unfair that Earl Stevens did colossal numbers compared to his siblings. Life isn’t always fair and when it comes to the genetic lottery E-40 got the biggest share of rap talent. This is a listenable album thanks largely to the fact it’s a collaborative work cleverly disguised as a solo CD.