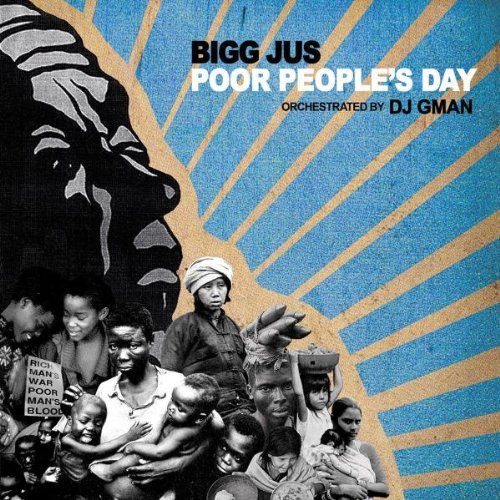 I’ve had “Poor People’s Day” for a while, but never got around to listening to it, for several reasons. In brief, Bigg Jus is an artist I can objectively identify as ‘good,’ ‘talented,’ and so on (especially on Company Flow’s record), but don’t necessarily like, nor enjoy – his solo style is abrasive, his voice monotonous, his lyrics hard to follow, and so on; what’s to love? In many ways, then, Bigg Jus is downright unpleasant, but that’s not an artistic critique – it’s a neutral observation, but one that needs to be made. And, it won’t affect the score either way. If that’s hard to believe, then an analogy: I consider Velvet Underground unlistenable in some parts, but think their work is some of the best in all of music. I can’t ascribe the same value to Jus, but I do think he’s good. That said, on to the album.

“Poor People’s Day” is produced by DJ GMAN, not Bigg Jus. A surprise, since Jus takes pride in his compositions. Regardless, there a couple of basic differences: more outright melody, and less complex instrumentation. The opening, “Everything Must Coincide,” features a subdued sample, scratching, and melancholy piano and drums, fading in and out. On paper, it may not sound too different from what Jus does, but, musically, the instruments don’t overlap, nor drown each other out in some warped shuffle – it’s more harmonious than competitive, in the sense that Jus, unlike Gman, likes to force his musical elements to play against, and not necessarily with, each other. This is a pretty critical change, a step to the side as far as the bulk of Jus’s work goes.

As Jus refers to himself as “new and improved,” perhaps he feels the above is better suited to his style. But, there are advantages to both approaches, as art doesn’t have much business growing static. A big improvement is that his vocals come through better – he’s more audible, and, given the melodious production, can do more with his voice against the beat, in accessible ways, following a rhythm that’s meant to be followed â€“ something often impossible for Jus to do on earlier records. In brief, Jus’s voice was often underused, and I suspect his rough, vocally unapproachable beats had much to do with it. But, not here. Still, despite his potential for other styles, he’s also suited for the ‘harder’ sounds, for cacophony, especially given the subject matter – the better, slightly less lush tracks demonstrate this here. And, just look at El-P – while his post Co-Flow production is objectively better in every way, it’s hard for El-P to approach 1997 subject matter in similar, ‘older’ ways, or to induce the same responses. Aesthetically, then, it’s less ‘urban’ – not many of those harsher arrangements, for example – which can be said about “Poor People’s Day,” too.

In “Supa Nigga,” Jus is thrown against a lush, bouncy composition, and rides it well. In fact, his vocals found a new rhythm, are even slowed down – all for the better, I think, as he is doing more than just mumbling this time around. Lyrically, he’s improved from his solo stuff, but never matches his Co-Flow material:

Conceptually, the album has been called ‘political,’ but that’s true insofar as Bigg Jus is, and always has been, a politicized rapper, with lots of other stuff to talk about. It’s a bit more obvious here – the title, the text on the disc (“being poor is not a crime”), the loose concept – but that’s about it, as he’s had this material before. Also, some of his political raps are pretty banal, as a good message does not necessarily make good art. On “This Is Poor People’s Day,” he ‘rhymes’ with a dull eye set on generalities:

“This is poor people’s day
misery, conflict, and hardship
lack of clean water, and landmines
corrupt policy makers who under value equity
then try to steal up your resources”

And, not a single memorable line! Production-wise, it’s one of the worse tracks – a jazzy affair with hackneyed vocals on ‘freedom’ coming at the middle, it turns the otherwise warped, off-beat Jus into just another conscious rapper with little to peddle beyond the obvious. “Orbital Mechanics” is better, as political lines are thrown against some less obvious material, all connected well. Musically, it’s actually much closer to Jus’s ordinary stuff: a dirty, muffled drum drives the song abrasively, like in most of his early stuff, while dark vocals are sampled throughout.

“Halogen Lanterns” is excellent musically, with a subtle, fading violin, a small piano, light scratches, and other elements starting, then crumbling at different points in the song. In brief, there’s great variety, with the kind of instrumental complexity Jus himself is used to. At over 6 minutes, though, I doubt it needs so much – Jus himself, in familiar musical territory, is repetitive, especially flow-wise, and perhaps should have limited himself to one taut, muscular verse. The instrumental picks up some slack, though.

“Illustrations of Hieronymus Bosch… That 1467 Shit” is by far the best track here, bringing Jus’s most intense performance and genuinely great production. The vocal sample is a split-second, cut-up and subdued fulcrum for the rest of the song: harsh drums, electronic beeps, and warped violins. The Bosch reference is exploited not only by the almost cluttered beat, but Jus’s spiritual/dark imagery. In brief, there’s a lot of substance, and no loose ends – it’ll remain one of Jus’s best artistic moments, if not lyrically, then at least in the sum. “Night Before” is a calm afterword, musically structured as relief for the above track, but touching on similar ideas.

I’m not aware of any new projects by Bigg Jus, beyond this album. I’ve read Company Flow planned to release a new album in 2006, but obviously that didn’t work out. Still, is this a new direction – decidedly less urban, more broadly conceptual? It seems to work for Bigg Jus a little better, as far as the total ‘sum’ goes. Jus is vocally and stylistically more varied than ever, which makes this material quite listenable.