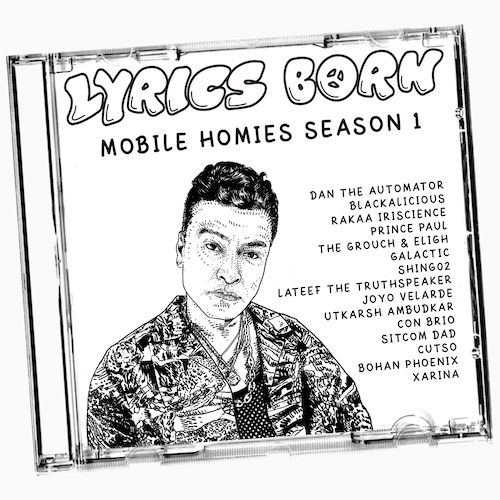 If the title of Lyrics Born’s new album “Mobile Homies Season 1” sounds more like a TV show or a podcast, you’ve already gleaned some insight into why it exists. Tsutomu “Tom” Shimura started his show as a chance to talk to his friends during the pandemic lockdown, and what may have begun as a necessary mental health outlet quickly developed into something larger. After wrapping season one the restless Shimura kept his energy flowing into an album of the same name, and to celebrate its release he just dropped a humorous music video for “This Song’s Delicious” produced by Dan the Automator, featuring both him and the aptly named Sitcom Dad.

The album reflects the concept by being an excuse for Lyrics Born to collaborate with people from the show and his “Homies” in general. If you think that this is an entirely lighthearted affair based on the debut video though, you might want to check “ANTI” featuring Cutso. It shouldn’t be brave to talk about racism against Asian people (or those who just happened to “fit the profile”) on a rap record, but it feels hella overdue especially given the former President’s “Chinese virus” tweets and remarks. “Put the world on notice, you touch me or my fam/you won’t catch corona but you’ll catch these hands!”

The one thing that seems to dog Born throughout his career is “When will Latyrx get back together?” I get it because I hold his tag team with Lateef the Truthspeaker in high esteem myself, but Shimura is so much more as an artist than that one collaboration. I won’t lie though — it put a smile on my face to see the two of them reunite on the Jim Greer produced “Desperada” featuring Xarina; then my heart swelled to the bursting point when I heard Chief Xcel’s stellar “My City” featuring the late Gift of Gab. Pour one out for the rap legend.

In the space of only 12 tracks, Born manages to touch every point on the map and seems to have read my mind on who I’d want him to work with. An “ANTI” update featuring Rakaa Iriscience and Shing02 among others? Absolutely. The Grouch & Eligh doing a “Enough About Me Remix” produced by Cutso? You bet. The musical maestro/weirdo Prince Paul joining Shimura for an atmospheric track called “Everyday Love”? Oh HELL YES. Could I get a whole album of the two of them together please?

Now I wouldn’t be giving you the full picture if I didn’t tell you I’m a Solesides/Quannum fan going all the way back to my college years three decades ago. At the same time just because I’m a fan doesn’t mean I won’t tell you if Shimura dropped feces on bread and tried to pass it off as a turkey sandwich. I’m not feeding you bullshit when I say “Mobile Homies Season 1” is good, because Tom is not feeling me BS disguised as Easter leftovers either. And you know what? It’s free. Even if you don’t like it whatsoever it will cost you zero dollars and zero cents. I’m strongly convinced that my fellow rap fans will enjoy it too, even if this is their first ever taste of what Chef Shimura is cooking up.