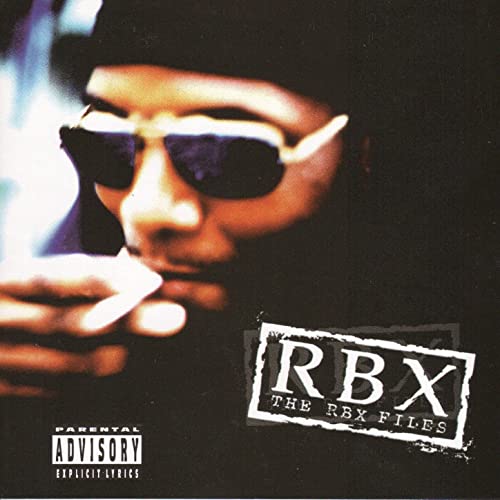 “Long Beach is the city
Since I’m from Long Beach, I got to put in work!
And no, this ain’t Compton and Long Beach together…
… strictly Long Beach”

To understand what’s going on with “The RBX Files” a little context is necessary. RBX (born Eric Dwayne Collins) counts both Daz Dillinger and Snoop Dogg as cousins, so it was only natural that he made memorable cameo appearances on Death Row releases like “Doggystyle” and “The Chronic” in the early 1990’s. His deep gravelly voice and his scatter shot lyrical delivery had rap fans excited about the potential of a RBX solo album, but X had a big problem. Unlike other artists who were down with Death Row, Collins didn’t feel like signing his whole life over to Suge Knight, so every time the subject of his album came up he got pushed to the back burner. When those tensions boiled over, X stepped out and signed with Premeditated Records (which even today I suspect was a parody of Death Row based on its name alone) and put out diss records like “A.W.O.L.”

“Doc-tor Dre, do you remember you was broke
and the whole rap industry thought ya was a joke?
Me, D.O.C., and D.O.G., sat and made
lyrics to replenish your name like Gatorade
But you got thirsty for the money! Punk
and disrespect the three that put ya back up on it
Always talkin bout, your word good as gold
Wash, fold, put it out to dry, cause you lie
I put that on my momma and my mate
and if I’m makin this up, let my momma head lay”

The twisted thing about it all is that X’s repeated proclamations that he had to “escape from Death Row” proved true for the entire roster. Sooner or later everyone realized that Suge Knight was trouble, and Dre made his own prominent exit in 1996 to form Aftermath Entertainment. Suge’s machine continued to roll forward on momentum alone, but a decade later he had no stars and nothing to sell but repackaged compilations of the glory days, prompting him to file for bankruptcy and liquidate the label. If RBX had the prominence of Dr. Dre, Snoop Dogg, or Tha Dogg Pound that demise might have come even faster, but he was merely the canary in their coal mine.

Unfortunately that’s also a problem for “The RBX Files” that I don’t imagine X had enough perspective to see clearly at the time. When he dropped lines on “A.W.O.L.” like “Remember me? I’m high, powered/Remember me? I drop bombs like Hiroshima” he was pointing out his “greatest hits” at Death Row while simultaneously trying to diss how shady the label was. He ignores the contradiction as much as possible, but it’s ultimately impossible for him to have it both ways. He wants to distance himself from Death Row as much as possible, but he also wants people to buy this album because they know his voice from his time there. The problem is that short, experimental songs like “Fightin’ the Devil” and “BMS On the Attack” wouldn’t attract fans of Death Row’s G-Funk sound.

The album also feels like a transitional phase for Collins, where he’s trying to shed his gangster past and be more “woke” for his black brothers and sisters. In this endeavor he’s better able to embrace the contradiction between being uplifting and being ruthless, because his dark past gives him the aura of credibility when he preaches to his people. He’s not a phony who talks the talk having never walked the walk — he’s somebody who saw how gangster Suge Knight could be and had an epiphany about his own life.

Ultimately the biggest drawbacks of “The RBX Files” are that it’s too long (almost 69 minutes) and that even when he’s making good points about Death Row it sounds tinged with bitterness. Maybe he thought Snoop and Daz would have his back and left disappointed that family didn’t do him right, but I suspect if they stepped out of line to help X that Suge Knight would have made sure there were serious repercussions. As Eazy-E once said “at Death Row, I hear you’re getting treated like boot camp.” You took orders, you followed them, and if you didn’t well… things went very badly for you. X made the right choice, but in a way so did Death Row, because RBX seems better served one guest verse at a time. The fact this album works most of the time if not all of the time is if nothing else a testament to the sheer willpower of X, not to mention his dogged determination to flip Death Row one giant middle finger.