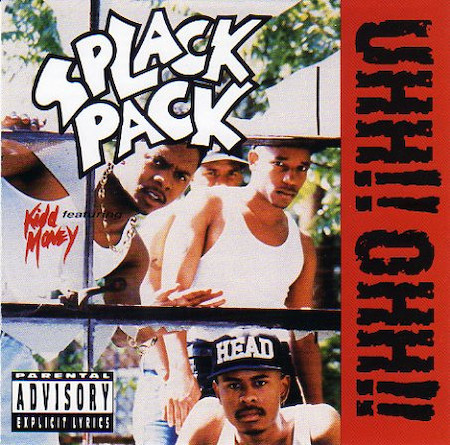 The one and only thing I remembered about Splack Pack before starting this review was the single “Scrub Da Ground,” and my memories of it were that it was pretty typical Miami Bass booty shake rap for the early 1990’s.

Trying to find information about their 1993 debut album “Uhh!! Ohh!!” beyond that isn’t easy. My man Peter H the Hardcore Canadian refers to artists like this as “delinked” when they don’t show up on Wikipedia, but thankfully that’s not the be-all end-all source for information online. A deeper dive reveals that the group was founded by Sean “Kidd Money” Chavis in West Palm Beach, Florida and rose from local prominence to national recognition in short order along with other Florida performers like 2 Live Crew, DJ Magic Mike and 95 South just to name a few. Unfortunately that search also revealed that Kidd Money passed away in 2019, although because the Pack is delinked the details about his passing are few and far between. Nonetheless my condolences to his family, friends and fans.

At least before his passing Kidd Money got to see Splack Pack get a second chance at fame when “Shake That Ass Bitch (Remix)” was used in the outro to end season one of Rick and Morty. In the realm of unlikely placement of obscure rap groups into mainstream culture, Splack Pack was pretty high on the list. In truth I thought that appearance alone would finally get them over the “notability” threshold for Wikipedia editors, but it seems that neither that nor K.M.’s passing would satisfy their requirements. As of the writing of this review their only hope of getting linked is one mention on a list of rap albums from 1993, one that doesn’t even mention the date it came out. Thankfully Discogs is more reliable and confirm that it dropped on July 20, 1993. Now you know more about the Splack Pack than Wikipedia does.

Here’s one more thing you can learn — the song “Slow Head” uses the same “Be Alright” sample of Zapp that featured prominently in 2Pac’s song “Keep Ya Head Up.” If you’re used to the positive affirmations that Tupac Shakur offered on that song to black women, it’s a bit jarring to go from that to the Splack Pack giving women pointers on how to suck dick. No one can ever say the Florida rap scene of the mid-80’s to mid-90’s didn’t affirm their love of two things though — sex, and more sex. It’s funny in hindsight just how outraged a bunch of uptight white conservatives got about kids listening to booty shaking music. Bet you they never complained about Elvis gyrating his hips on live television.

Even by the standards of “let’s be crass to get notoriety” though the Splack Pack takes misogyny to levels that make me wonder if they’re serious or not. I get that calling women “bitches and hoes” would make Tipper Gore quiver in her boots, but the Pack are so convincing in their act that I get the feeling it’s not just for the album. “Oh shit! Don’t you quit! Let me see you work it bitch!” Yes, “Let Me C-Ya Work It” is a typical call and response song by Miami Bass rap standards. It wouldn’t out of place on a 2 Live Crew album. The problem then isn’t so much the quality of the words but the creativity of the content. If it sounds like 2 Live Crew, did the world really need a Third or Fourth Live Crew? My answer is no.

The best argument for “Uhh!! Ohh!!” being delinked isn’t that the group wasn’t notable. They were popular both locally and nationally, enough so that they were remembered fondly by the creators of a cartoon that’s often as crude as Splack Pack themselves. The argument would be that the Pack weren’t innovative or creative in any way. They didn’t add anything new to the scene musically or lyrically. They tried to out-crass the other rappers in the genre and let’s face it, that was a race they were never going to win. It’s not shocking that their time in the spotlight came and went so quickly.