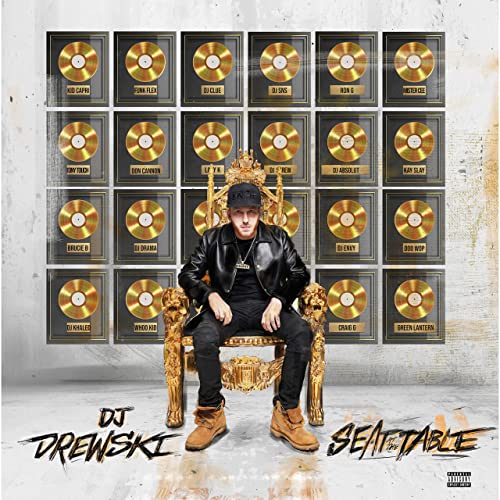 Seat at the Table

DJ Drewski :: Seat at the Table

I have a confession — I have never watched Love & Hip Hop: New York. It’s not for any reason other than the same reason I have never watched Keeping Up With the Kardashians, Total Bellas or Amish Mafia. It’s a style of television programming that doesn’t appeal to me, regardless of who is featured on the show or what form of notoriety they have coming in/going out of that show. Since I don’t live in the New York radio market, I also wouldn’t have known DJ Drewski was a radio personality from Hot 97, although judging by the fact searching for his name redirects you to the Love & Hip Hop cast, it seems fair to assume more people know him for the show than for being a DJ at this point. To get some idea of what we’re dealing with beyond the fact he repeatedly says “DROO-SKII” in the intro of tracks on “Seat at the Table,” I went to look for a clip of highlights (or lowlights) from his run on the show.

Ironically the person he’s hitting on in this segment is more notable to Wikipedia than Drewski. Reality television is as “real” as a segment of Raw, so I’m not going to assume this wasn’t scripted carefully to go down exactly the way we see it, but perhaps there’s a glimmer of his personality that carries over to songs like “I Like You” featuring Coi Leray and Sada Baby. I’m specifically speaking of Coi Leray in this case: “Young boss bitch, I can show you how to grind.” Drewski is definitely not “fucking with lame hoes.”

Here’s one thing I can tell you with certainty about Drewski — he’s living up to the deejay part of his name by being more “host” than “star” of “Seat at the Table.” It’s the modern day equivalent of buying a major label DJ Clue album. (Whatever happened to Clueminati anyway?) Unfortunately in this case Drewski is the kind of deejay who follows the trends instead of the trends following him. That means that despite the old school BDP “South Bronx” samples you can hear in “Time to Ride,” the performances from Brandon and Smoove’L are the same pitch corrected syrupy singing you can find on a million releases today. I’d have preferred an instrumental version.

The single most recognizable name on the entire album other than Sada Baby was Desiigner, and “Hot Boy” doesn’t do him or his fellow emcee Maliibu Miitch (obviously related given the the DOUBLE I) any favors. It’s painful to listen to.

Listening to this album has convinced me I’d rather watch LHHNY instead.

It doesn’t seem like that’s a realistic possibility though as both he and Sky have moved on to post-reality show domestic bliss, so I wish them all the best going forward. TBH I’m sure he’s a nice guy and even a good radio personality, though my conclusion from “Seat at the Table” is that he’s not a “DJ” in the sense of Babu, Terminator X, Scratch or Premier. If he produces then he’s only producing what’s currently trending, not innovating or creating anything fresh, which I imagine is the same role he plays as a “DJ” at Hot 97. He just spins what they tell him to spin.