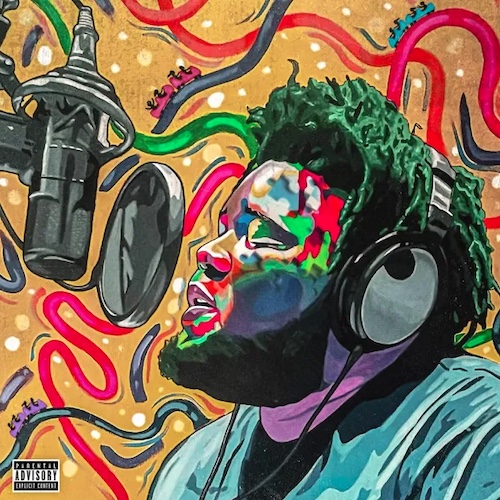 It’s time to check on on Rod Wave again. Two years ago I reviewed “Pray 4 Love” at the height of the global pandemic as we were all pondering an uncertain future. He might not be recognized as a classically trained singer, but his “trap soul” version of hip-hop pulled at my heartstrings, and he put the anxiety of the times into words with some smooth, easy to listen to beats. His latest effort “Beautiful Mind” follows in those footsteps so closely that if you looked at the sand, you’d only see one set of prints trailing across the beachfront.

It doesn’t surprise me that the Will-A-Fool and B Squared produced track instantly propelled his album onto the Billboard charts, or that Wave continues to defy the tradition of rappers being harder than hard and colder than ice. “You ever feel like you worthless?/Like you ain’t worth shit?/And I know that I ain’t perfect/But you know that I’m worth it.” That’s the universal human condition no matter what part of this planet you come from. None of us want to be alone, to feel alone, to go through this life alone. On “Yungen” with Jack Harlow, Wave reveals that he had to acknowledge this pain and bet on himself to succeed even when everyone bet on him to fail.

“I still remember high school, I ain’t fuck with nobody
Mama lookin at me crazy when I told her ‘Fuck college’
I couldn’t follow rules, got me kicked out my momma house
Told you I’d be a star sittin on your momma couch”

The bet obviously paid off because “Beautiful Mind” is his fourth major label album, and there are no signs he’ll be stopping any time soon. With this kind of success no one needs to sockpuppet for Wave, but as of this review his Wikipedia page contains laughable edits like “Since the album was released Rod wave has reached 1 on the billboard and continues to rise in the ranks making a stamp in the rap game.” The lack of capitalization, the lack of citation for this accomplishment, and the unnecessary editorial opinion are all examples of a fan who just had to stick their nose in. Rod Wave’s doing fine y’all. He doesn’t need the help. He dropped the first single just under a year ago and “By Your Side” has done 60 million+ views since then. He’s good.

“If you get lonely, give this song another listen.” Damn. That level of empathy generally just doesn’t exist in the entertainment world, let alone rap. Everyone is so concerned with their own success they don’t give a second thought to the feelings of those around them, let alone the people who buy their “brand” and support it, but Rod Wave portrays the exact opposite. I say “portrays” because he’s either so good at faking it that he’d be labeled a sociopath or so real with it that fans probably come up to him at concerts and want to hug him, especially after hearing tracks like “Cold December.”

Just look at the thumbnail — Wave looks like he’s about to burst into tears. I’m not sure I can remember any other rap song that sampled Hank Williams Jr., and I don’t think I’d want to hear any one other than Wave’s. A laundry list of producers took part in the track: TnTXD, ThatBossEvan, Jb & Luke Walker. I guess we just have to credit them all as a group for how catchy the track is and head nodding the beat feels. It’s hard to find a track that doesn’t bump though. I hit the random skip and landed on “Me Vs. The World” and was immediately sucked in to the JBFlyBoi x SnowZCold track.

The track also shows a harder side of Wave as he breaks down the pitfalls of his success. “The crackers want my freedom/niggaz wanna take my life from me/conversatе with my BM/these niggaz wanna take my wifе from me/get up on me, do me bad and break down my dynasty/niggaz tryin to get close just to stab me in my back.” It’s the unfortunate reality for young successful artists in rap music — just ask the late PnB Rock among many others.

There isn’t that much to knock after running “Beautiful Mind” front to back multiple ways and multiple times. He and his myriad producers keep the vocal modulation to a minimum, allowing us to hear the real Rod Wave loud and clear. What we hear is the dreams and ambitions of a young man with the whole world in front of him, and although I’m not the religious type I pray that the weight of the world doesn’t ultimately bring him down. His ability to share his feelings honestly through his songs is a rare gift among rappers.

Don’t get it twisted though y’all. I’m not eschewing my M.O.P. or Onyx records — that anger and intensity has its place too. The genre is big enough for it to not be “either/or” and we can have everything from sensitive thugs to heartless bitches to sci-fi nerds in the rap game. My only complaint is that at 68 tracks over 24 minutes, “Beautiful Mind” starts to blend together. Individual songs can be seductive but his singing can lull you into a peaceful state over such a long stretch. Yeah it’s not much of a complaint at all is it? Don’t buy this album if you don’t want to chill out too much.