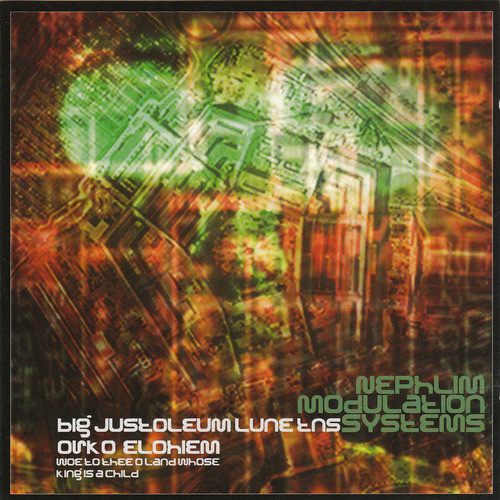 Woe to Thee O Land Whose King Is a Child

Nephlim Modulation Systems :: Woe to Thee O Land Whose King Is a Child

Two things happened when Company Flow and Rawkus Records imploded under the weight of their respective successes — El-P formed his own label, and Bigg Jus did too. You can argue the former was more successful than the latter given the greater length of is existence or size of its catalogue, but that’s not the point I’m out to make here. Instead I’m illustrating that two artists from a highly influential rap group felt a frustrating lack of creative control over their own product, and sought to regain that control by any means necessary. They then sought to extend the olive branch to fellow like-minded rap artists who didn’t want to give up their artistic freedom to any corporate overlords. What I will argue is Bigg Jus stayed the more ruggedly independent of the two even at the expense of commercial success.

Take for example Nephlim Modulation Systems, the rap group that Bigg Jus formed with underground Cali rapper Orko Eloheim. It’s not a stretch to say that even the most ardent Bigg Jus advocates have not heard their one studio album “Woe to Thee O Land Whose King Is a Child.” What’s curious is that they did not release it through Jus’ own Sub Verse Records but through the already established Ninja Tune, the only label we’ll discuss in this review that is still in operation today. I’m not sure that made a difference in the amount of exposure the group would ultimately receive. The album was purposefully lyrically dense and musically abstract, at times sounding like a new iteration of Company Flow on songs like “Invisible Oblivion.”

I’d even go so far as to say Orko plays El-P to Bigg Jus, spitting the same kind of rapid fire words with no regard for the beat that El-Producto was famous for on CoFlow tracks. There were also times on “Woe to Thee” that neither of them bothered with rapping at all. Orko used the entirety of “Bullets R Ejected” to show off his production skills, weaving a sample of GZA from “I Gotcha Back” in and out of layers of samples until he abandoned it entirely for a completely new set of sounds. It’s arguably two or three different songs presented under one name, and as a showcase piece it’s impressive.

Even when guest producers step in and take over for both men, such as Orko’s comrade Infinity Gauntlet on the song “Fendi Shoe Bomber,” the album maintains its apocalyptic and futuristic feel. This is not an optimistic duo. Jus believes “the road to hell is paved with good intentions” and speaks in ominous tones about thermonuclear war, while the song is punctuated with soundbites of George W. Bush. It’s pretty clear that they saw the second US vs. Iraq War as a sign that the whole world was going to hell. Perhaps you’d even say they were prophetic listening to it in hindsight.

While the album seems rather massive at 17 tracks long, closer inspection reveals that almost 50% of the project is instrumentals, save for a “Big Top Circus Freak” remix of “Super Pretzel.” I don’t think the remix was needed but given the harrowing lyricism of this music it’s nice to have the instrumentals to examine all by themselves. I’m at a bit of a loss as to whether or not to recommend Nephlim Modulation Systems to anyone. I think “Woe to Thee O Land Whose King Is a Child” is a fascinating record, one that’s very much a product born of Bigg Jus’ mistrust of both the music industry and the “new world order” that George Bush Sr. once heralded. It’s certainly not dance music, nor is it head bopping, and you can often be overwhelmed by a sonic wave of sound and lyrics crashing over your head. I can safely tell you though that this is not a BORING record, and if you need a change of pace from the same old shit, N.M.S. is definitely it.