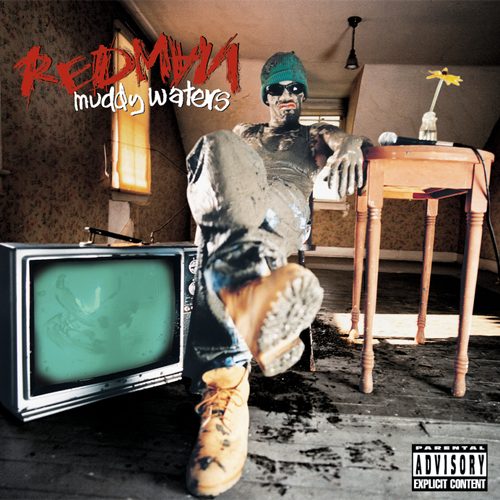 “Redman, wake up… wake up Redman wake up this is album three!” Dr. Trevis is addressing the wrong person, if you ask me. It’s YOU who has to wake up and realize that ever since Redman got put down on EPMD’s “Hardcore” he’s had the East coast locked down with skills. Many people bought his debut, “Whut? Thee Album”; many slept on the equally impressive but cloudily overcast sophomore LP “Dare Iz a Darkside”. Now Redman’s back “to start a campaign on ass kickin” and from the first song to “Da Ill Out” there is no doubt that it’s lyrical war and Reggie Noble is taking no prisoners.

Join us in the battlefield, in the swamps and the Muddy Waters of Newark NJ. The title implies a kind of grimy rhyme style that Red has always had, but it also implies a blues artist or a soulful funk feel; both are apt. At times, Sermon hooks Red up with a real “punk smoove” beat that Mr. Noble drops science on; other times the beat hits harder than granite – and in “Soopaman Luva 3,” we get hit with both in two successive verses! Am I a fan? You can tell, but if you’re a real hip-hop head, you already know about the way Redman breaks it off and this shouldn’t be a surprise at all.

One of the album’s illest cuts is a reunion duet with K-Solo known simply as “It’s Like That (My Big Brother).” Over a reworking of one of hip-hop’s all time hardest beats (Just-Ice’s “Cold Gettin’ Dumb”) K-Solo and Redman trade back and forths with K-Solo bragging he’s “loquacious and gregarious” while Red makes it clear with the statement “You battle me, you won? You might of, but then you woke up”. As my homegirl Nigerian Goddess would say, it doesn’t get any more ecstasy than this. (She nearly beat my ass in when I mistakenly told her this song wasn’t on the new album.)

There’s too much to love to give it to you all in the space of a few paragraphs, but let it suffice to say that there’s something for every stripe of Redman style. Songs like “Welcome (Interlude),” “Do What Ya Feel” (a duet with Method Man) and “Yesh Yesh Y’all” capture the dark feel of album numba two; while songs like “Pick It Up,” “Smoke Buddah,” and “Da Bump” capture the flows of the debut that made Red the Funkadelic MC. There’s really no bad moments on here; except maybe for the short “Chicken Head Convention (Skit)” tacked on right after the incredibe Erick Sermon duet “Whateva Man;” a definite slowdown at the wrong time. If you only knew Red from his “How High” duet with Method, you’d still find this is the bomb and so will the long term Red-headz; even the ones who weren’t feeling the last LP. This may be one of the last albums of ninety-six but it easily cracks my personal hip-hop top ten!