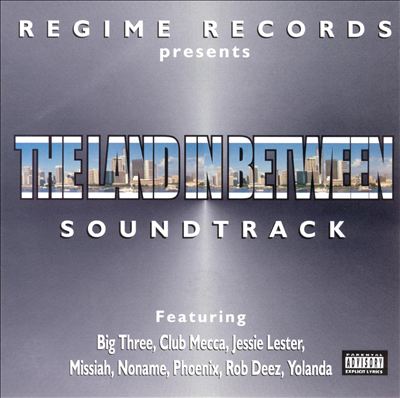 Various Artists :: The Land in Between Soundtrack

From everything I can gather out of the press releases, the term ‘soundtrack’ is meant to imply a score for “life in the Midwest, The Land in Between the two coasts” rather than an actual movie. Interesting. Most of these heads hail from Wisconsin, but don’t take them as being cheesy.

You wouldn’t guess that the opening song, “Diamond Studded Shit” by Big Three, was a rapper from the Midwest. Lyrically and musically it’s a dead knock off of New York, but not in a bad way. The beat is snappy and Big Three kicks clever battle lyrics like “I snap an MC’s neck like my name was Rick Rude”. Not bad at all!

“Mental Drift” by Jesse Lester kills my vibe though. I appreciate that he wants to do a positivity cut, but listening to him sing actually makes me want to go buy an R. Kelly album. If I gotta hear somebody from the Midwest sing, they should at least be GOOD!

“Who Dat MC” is kinda nice. Rob Deez is good snapping, with lines like “Any problems you got, I can solve em, cause this rap game be like law, and I be Johnny Cochran.” Makes me want to hear Deez and Big Three battling each other!

“Why Label” by Club Mecca questions the assumptions about who people are and where they come from. I didn’t need the convincing, cause I already know the Midwest got fresh shit, but this song might be a wake-up call for some. “Why label, we all able, to rock mics and turntables, we all connect like cable.”

Big Three gets another chance to shine with “Mind Games”, dealing with the stress between men and women. The piano beats set it off REAL nice. This cut is Johnny Blazin! Also check out “Diamond Valentine”, the first single from the album and the buzz song in the industry. You’ll recognize the beat from Eric B. & Rakim’s “What’s On Your Mind” and true to the first it’s an ode to the honey dip – and I ain’t mad at it. Big Three has definitely broken into my list of “emcees to be checkin for”.

Peep “Guard Your Life” and “Body Language” by Club Mecca on the second half of this soundtrack. Musically and lyrically, this whole crew is on point. Also, look for the kid called Noname TO make a name for himself rapping over a rather haunting score on “The Pressure”, it’s really nice.

Bottom line? I don’t think anybody on Regime Records has anything to prove. The cats with talent are definitely on some fresh shit and it sure don’t matter to me they’re from Wisconsin.