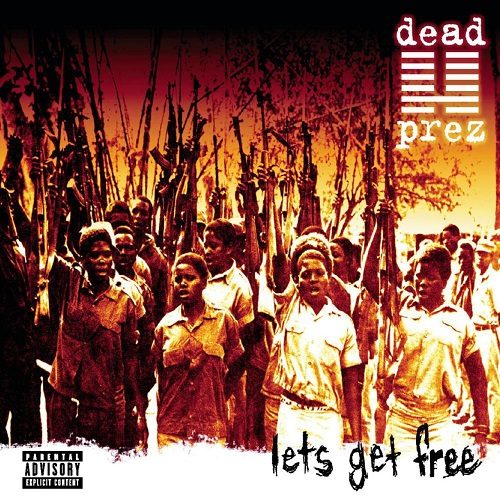 A group with their eye on the political, the conscious side of things more often than not, dead prez describe themselves as “somewhere between N.W.A and PE.” While that’s an apt statement, I find them closer to a hybrid of Ice Cube and KRS-One, complete with all the incendiary statements, ill metaphors, unblinking honesty and forceful delivery those two were renowned for. Hell, the album is even split up into a “today” and “tomorrow” side, much like Cube’s “Death Certificate” was split into the “Life” and “Death” sides. But they’ve also got some of the bad parts those cats had, too. But enough of that, lets do the track by track thing, get down to business here…

“Wolves”: The intro. I like the two tones that ring through the beginning. Nice and eerie, and then the other shoe drops as a hard ass kick drum thumps in while Chairman Omali Yeshitela tells a sick and in many ways disturbing story of a wolf in Alaska, and makes the story an analogy for crack use. One of the better intros I’ve ever heard.

“I’m a African”: Ooooh, shit got me bouncin here. This track owns a nice little beat, beeping synths and a gurgling bass propel the track along. Mista Sinista is on the cut, nice nice. They even mutate the “Niggaz4Life” chorus. This is some ol ’91 type shit here, something to think about and shake your ass to all at the same time.

“They Schools”: I’m a little startled by what sounds like Jimmy Stewart at the beginning of this track, screaming “Why haven’t you LEARNED anything?” Jimmy Stewart and dead prez is a matchup even MTV’s twisted minds (thank them for Martha Stewart at the MTV awards lookin all shook like Busta was gonna fuck her right there while they were both presenting or somethin) couldn’t have come up with. Anyway, I can see kids in school lovin this shit. At least I would have, because I know *I* fuckin identify with this shit right here: “I went to school with some redneck crackers…,” and then goes on to rail against history teachers who perpetuate lies in high schools across America. I don’t dig the singin on the hook, though. It don’t fit right, kinda mars the songs momentum.

“Hip Hop”: Damn. Crunk up is right. The single out right now that’s catchin cats’ ears, deserves to catch em, even quoting the one Bob Marley: “One thing about music,when it hits you feel no pain.” I don’t know if it’s quite up my alley (is there a remix?) but I can see this motherfucker gettin much play in the rides. That chorus brings it all together, though. You can’t front on “It’s bigger than HIP–HOP–HIP–HOP!”

“Police State”: Point blank, his beat fucking BANGS. I like this shit. Like it a lot. Definitely one of the highlights on the album. They tackle the subject of police, government, and concepts of freedom (they do this a couple times on the album) on this track, the first in basically a three song cycle on government and the legal system. I like the use of wordless voices in the background, it adds that touch.

“Behind Enemy Lines”: The next step after “Police State,” starts with the sound of incarceration, and continues with a haunting little flute loop. This is an equally haunting story rhyme. The beat switches up nicely to a piano quote during a phone call out of the prison, but doesn’t stay with it. Too bad, but maybe that’s cuz I’m a sucker for piano loops anyway. The chorus is effective as hell: “You ain’t gotta be locked up, to be in prison, Look how we livin…” – damn.

“Assassination”: Oh shit, listen to this little kid at the beginning. This is the third song in their 3 song cycle that started with “Police State.” This beat just ain’t grabbin me, though. I think it’s the wailing vocal sample that repeats endlessly over the drums. Thankfully, though, dead prez don’t pursue this track too far, and it ends pretty quick.

“Mind Sex”: This is a fuckin fat beat. Bass is hittin deep on this one. dead prez does the love song it seems no album is complete without. I was wonderin if it’d show up on here. Now, I’m likin the sentiment here, but lines about salad and croutons shit got me goin “Ummmm…” And just when I think they’ve gotten over one corny line, they launch into another one. The chorus is pretty cornball, too. I dunno about calling a good conversation with a woman “mind sex.” It sounds kinda hokey to me… but this beat is helpin out a lot. A song that’s about actually appreciating women for their intellect is so out of place in hip hop today, this could be seen as a novelty. It’s a refreshing shot, but unfortunately they tryin too hard, though. There’s a poem at the end nails the earnest but sexual mood the track was trying for better than the rhymes do.

“We Want Freedom”: There’s a dope fuckin intro to this one. And a nice beat that moves swiftly along with a rising and falling piano line, layered with a flute loop. The flutes kill it, too, take the track to that bangin level. I’m loving this dead prez style of production that’s becoming clear to identify. After “Mind Sex,” they sound way more comfortable approaching this subject matter. “If you don’t think it can’t happen think again my son…” Unfortunately, like “They Schools,” the track is almost fucked up by some more wack singin. I don’t think I’d mind, but this guy’s voice is too breathy and limited. Oh well, the singing is short enough, and the rest of the song makes up for it.

“Be Healthy”: OH SHIT. I love this beat right here. My head is snappin. That guitar is type nice. This song boasts the best beat on the album, but unfortunately, I’m not on the nature food shit, though, so most of this song’s subject matter is losin me. Can I get an instrumental? This is the first time I’ve heard Falafel shouted out in a song. Oh, yo, Prodigy is at the end of this…I dunno if he added anything, though. I’m pretty sure dead prez could have handled saying the 20 “Hold the fuck up, yo’s” and “Nahmsayin, nahmean, word the fuck up’s” that Prodigy (who woulda guessed he’s all for that health shit? I thought he liked feeding people bullets) manages to squeeze into 2 minutes. This song ended quick, too. I REALLY want an instrumental, though.

“Discipline”: Okay, the singin is wack. I don’t like it at all… This is probably the only fault I have with the album. But luckily, it’s basically an interlude. Good thing the song didn’t go on. I like how the wack parts on here are at least kept short and aren’t dragged on and on.

“Psychology”: Intro to this track is aiight. At least the singing there was good. It had some kind of emotion and feeling in it. The beat is a little too blah for me, but their voices and force of delivery is makin up for it, especially for weaving poignant, painful and angry stories, with lines like “It’s like watchin your father smoke crack” stuck in their rhymes. These cats got a knack for visuals that agitate your mind’s eye.

“Happiness”: This song is a departure from the more serious content that came earlier. I love the flute loops and acoustic bass sample peppered throughout the track. I think the drums could be a little bit harder, but I’m just nitpickin. This got that sunshine vibe to it, and it’s easy to get caught up.

“Animal in Man”: They’ve basically went and converted Animal Farm into a hip hop song. It’s a dope fuckin concept, and it fits in this album perfectly. I’m smilin at how well they’ve done the shit, completely avoiding the mountain of cliches the song could have been. The beat just kinda creeps up and grabs you right around the middle of the first verse. dead prez got that nice production, no doubt. The track builds up at the end perfectly, even showcasing a violin solo, damn… See, why not more of this shit and less of the singin? Best song on the LP.

“You’ll Find a Way”: Classical piano runs starting the shit off, makin you think it’s gonna be that crazy vicious head crackin banger, but they go a different route with it. These cats are VERY confident in their production, showing off with this instrumental track, a combination of heavy hard shit and lyrical jazzy shit, complete with muted horn solos. Intoxicating.

“It’s Bigger Than Hip Hop”: Yeah, I like this better than the original one. Lyrically a bit more pointed, too. This is the version of “Hip Hop” I’d be playin in my car. The beat is a little more chunky, not as free flowing as the first. Nice remix.

“Propaganda”: This is one of the two hidden (kinda) treats on the CD. Track 44, you gotta search for this one. There’s some singin again, but this time it’s more tolerable. Opening line is dope, sets a nice mood. Jamar (who, along with Hedrush, helped out on a lot of the tracks) seems to be preferential to the vocal samples in his beats… Lot of questions and points raised in this song, lot of food for thought here, like the whole album, actually…

“The Pistol”: Track 45. Beat is kinda Wu-ish, to me. All off chord piano hits and atonal horn squeaks… I ain’t likin it, the only track I really ain’t feelin at all. The lyrics are startin to slip on this one, and the beat ain’t helpin at all… Nice break in the middle, though, Illegal Tendencies comes nice. Good guest shot.

You can’t fault the cats, they’re tossin up all kinds of variety in this piece. Definitely not a one note LP, as they cover topics ranging from school systems, legal systems, freedom and what freedom really is, what attracts you to women, all kinds of shit that the average hip hop release gives only a token line or two to, if it gives em a line at all. While they finally succumb to heavy handedness near the end, for the most part this is a very solid effort. The flat out bangers are spaced out nicely on the CD, and the songs in between them are compelling and interesting enough to keep your finger off the fast forward button, for the most part. If they’d kept the wack fuckin singing off the album, I’m sure I’d like it better. As it is, I’m happy that the first real conscious release of 2000 isn’t a ham handed hack job, but a well thought out LP. Sure, there’s bound to be complaints from the white kids about the usage of “cracker” on this album, but fuck it, who cares. These cats are bringing up shit that hasn’t really been seriously looked at in hip hop for damn near a decade now. Listen with open minds and open ears. But shut em for the singin on here, that shit is just straight wack, though.