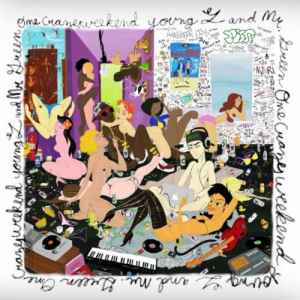 Inevitably when discussing “One Crazy Weekend” the subject of “Musical Meltdown” is going to come up, so let’s just address it right now. Over 15 years ago now, somewhere between his star making appearance on The Fugees’ track “Cowboys” and the EP he released with theOutsidaz crew, Zee recorded an entire album for Perspective Records that for unknown reasons never got released. Complicating matters is the fact that Perspective had a very short shelf life as a label, not even lasting a whole decade, and whatever was left of the imprint was absorbed into A&M Records in 1999, and they in turn were absorbed into the Universal Music Group, and… well I think you get the idea. You either own a bootleg of “Musical Meltdown” or you don’t, because at this point the original masters might as well not exist. There’s never going to be an official release because there’s no financial incentive for anybody at Universal to sort out the legal quagmire of who owns what, let alone press up and issue a rap album that no matter how critically acclaimed would sound dated compared to hip-hop in 2012 and would not move major units. I’m a cynical bastard when it comes to labels profiting off artists and even I will admit they couldn’t turn a dime on “Musical Meltdown” at this point.

Now here’s the good news – Young Zee and Mr. Green’s “One Crazy Weekend” is as close as you’ll ever get to owning “Musical Meltdown,” and if you’re a fan of Zee who already has the bootleg you could consider this a lineal sequel. His delivery and vocal tone have changed remarkably little over the years, which will be a love/hate issues for newcomers to his style. He’s very East coast, somewhat high pitched, and a little bit nasal. If B-Real had been born in New Jerusalem, he’d sound like Young Zee. His flow is also intentionally awkward, something which as a listener I’ve always found charming, but some heads may find it infuriating. It’s not that he goes on-and-off beat, it’s that he seems to stumble onto a beat by sheer coincidence or happy accident. At times you’re left wondering if Zee has a fat lip, a swollen tongue, and his jaw wired shut all at the same time. He’s not one of those middle of the road emcees where you’re going to be like “he’s aight” – your reaction to his flow and vocal tone will instantaneously be positive or negative with no middle ground whatsoever. If you feel it like I do though, tracks like “Those Dayz” are pure dope:

“On my block there’s violence, lots of tyrants
You can tell they bought guns, it ain’t rocket science
You run from the battlers, y’all fucks and scavengers
That’s why I’m cheap – y’all just hunters and gatherers
Huh! I’m back spittin that rhyme talk
with Hollywood Boulevard hand prints in the sidewalk
I’m pimp online, take mail-in orders
cause you white chicks look like Sarah Palin daughter
Young, I’ve been a +Bad Boy+ like Red Cafe
I don’t fuck with y’all, y’all niggaz dress mad gay
I take road trips with all the money on the seats
Get blunted on the beach then go huntin for two weeks”

Zee professes to miss the good old days “when niggaz just spit them raps,” and that’s pretty much how he lives. Whatever happens to him over the course of “One Crazy Weekend” is exactly what he’s going to tell you about, because that’s what’s on his mind. When he’s tired of the bitches, blunts and brew he’ll spend the day “Chillin with the Kids.” When he’s feeling proud of his Newark roots he’ll wax poetic about it on “Hometown,” even though “when niggaz drink they think they De La Hoya.” When it’s time to party again he’ll get down with some crunchy rock music on “Throw Your Hands Up,” and when he feels like laughing his head off at some fucked up shit the song is matter of factly labelled “Hahahahaha.”

“I don’t want fiends sniff coke at my wedding
I want me and my chick to be like Oprah and Stedman
Y’all haters, I’m back and forth to Las Vegas
Trickin off papers
I’ll sit on four acres
Your girl, any time I come FUCK that whore waittress
Moron! Give a fuck about your gun, we all gangsters
Ex-X addict, got lettuce like shrimp salads”

There’s a definite infusion of piano soul in terms of the beats Mr. Green laces Young Zee with, and a surprising amount of references to mixed martial arts courtesy of Zee, and on “Ooh I’m Telling” those worlds collide when he says “I choke you out, make you tap me like 15 times.” I appreciate that as a combat sports head, but I wonder how seriously he trains given some of the dated references – World Extreme Cagefighting was bought out by Zuffa in 2006 and retired in 2010, and Chuck Liddell’s last significant win over anybody was in December of 2007 and HE is retired too. So yeah it’s cool that Zee drops his name on the boom baptastic “Never Ever,” but why not talk about Jon Jones, Shogun Rua or Dan Henderson – someone relevant in 2012? Regardless the production from Mr. Green is so tight that I’m going to give Zee a pass on it, especially since there’s just something about his awkward delivery I can’t get enough of. “One Crazy Weekend” is destined to be an underground classic like “Musical Meltdown” only this time you can actually buy it in stores and enjoy it legally.