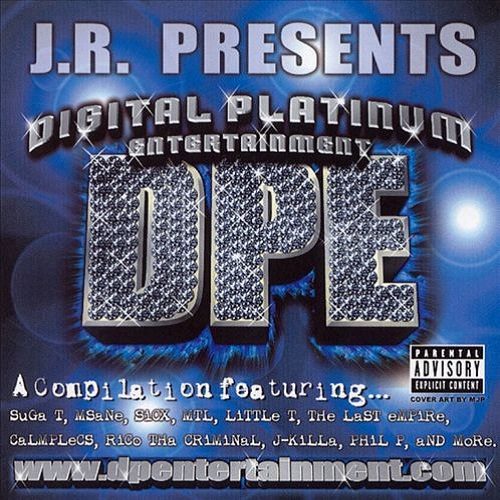 Representing for the city of Davis, California is the crew of Digital Platinum Entertainment. The first thing that hits you about J.R. and his family is the Pen and Pixel style logo on the front of the album; immediately contrasted by the irony of leaning on a piano on the back. A LITTLE more macked out than that woulda fit the thematics better – maybe a Sir Mix-a-Lot style mink coat or some shit – c’mon now!

Musically though, J.R. has no reason to front. The virtual bio at DPE’s website goes on and on about his experience and degrees but that ain’t a LICK compared to what’s on the album. Beats talk and bullshit walks – and these beats talk. They’d have to when you get cream of the Bay Area like Suga T and Msane (formerly Mhisani) to show up on tracks like “It Won’t Go.” T even gets a little humor on back at fellow Click-mate E-40 when she says, “Man I ain’t poppin my collar; I’m poppin my BRA-STRAP!“

The most talented rapper on the label is the dirty-voiced Philthy B. Knockin’, who shines with MO-P on the track “Straight Ridin'” and “Each and Every Day” with Little T; showing up on six tracks overall. As for Little T himself he gets honesty points on the title track “DPE (Now You Know)” when he says, “I’m just a regular white suburban kid, tryin to catch some hype.” Between this blunt realism, a fair to above average flow, and J.R.’s tight beats, you’ll be hard-pressed to playa hate on T.

J.R. pulls no bones about the fact he produced the entire album, and it’s his musical experience and beats that carry the weight. Tracks like “Dirty Mackin'” and “Let’s Go and Get It” are supa clean and bass dirty all at the same time – sounding as professional as anything by Ant Banks or Mannie Fresh. From the West coast to the South coast, this album would bump non-stop in any hood – if you just hide that tacky picture on the back cover with some black duct tape. J.R. deserves his congratulation, but a dude who looks like that can play the background while the DPE rappers and guests get their shine on to his fat beats – and they DO. From the hilarious and ill “Cheap Shots” to the pimped out “Condoms, Ho’s & Hennessey” you’re hard-pressed not to bump to Digital Platinum.