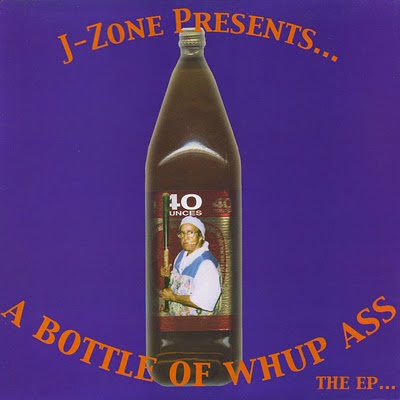 A Bottle of Whup Ass

Hip-Hop is taking itself too seriously – nobody’s willing to get bugged out or have a sense of humor about their own rap type shit. Even Kool Keith is pretentious but J-Zone is loosening things up by smoking something musically potent; and I’d like to get a fat hit. After coming with bugged out albums like “Music for Tu Madre” and singles like “No Consequences” (about a day when all laws in New York City where repealed) he goes one step further and smacks you with “A Bottle of Whup-Ass.”

“Yeah, Zone Mission part eight
As for parts two through seven, go look for ’em
Right now you wonderin where the chorus is
but I don’t do that shit”

Like The Roots said, where did Leonards part one through five go? J-Zone’s mental cut above reveals the purpose God put him on Earth for: “to make hip-hop and disrespect it at the same time.” That’s what J-Zone does all over this EP – breaking down all of the ills and stereotypes perpetrated by wack cliches and bad production. Zone is not a big baller; as a matter of fact, he goes out of his way to play himself as a Small Willie on interludes like “Ego Bashin'” and songs like “The Smurf Syndrome.”

I’m sure you’ve figured out what’s so “Smurfy” from that last selection; if not GET A LATE PASS. “Waxing” poetic to the baddest bitch on Ally McBeal is just one of J-Zone’s stress relievers – having dope guest rhymers like Huggy Bear and Al-Shid also spread the love and keep things on this elongated EP fresh.

“90 percent of y’all is wack and that’s a modest count
Another eight percent, all y’all really got is mouth
So for the two percent, this is what I choose to vent
Sleep if you intend on wakin up in the grave
thirty feet in the earth dirt if you don’t FUCKIN behave”

That’s Al-Shid wrecking the track “Recess,” so now you can consider yourself schooled. When the bell rings they hook up to get through “The First Day of School” as well – and you ain’t gonna be mad at Zone’s wildly jumping piano riffs and the slow snapping drumline; let alone the samples of Morgan Freeman! The album is brought together by his clever scratches, ill beats, and humerous down to earth rhymes from Zone and his extended fam. When you’re done listening to this so-called “EP” you’re actually going to feel like you listened to a fat full length album. This is one of those rare albums where even the skits like “Nocturnal Emission” are gonna have you laughing and nodding your head to the beats at the sametime. Waste not, want not, J-Zone is here to give you the very best of everything he’s got.