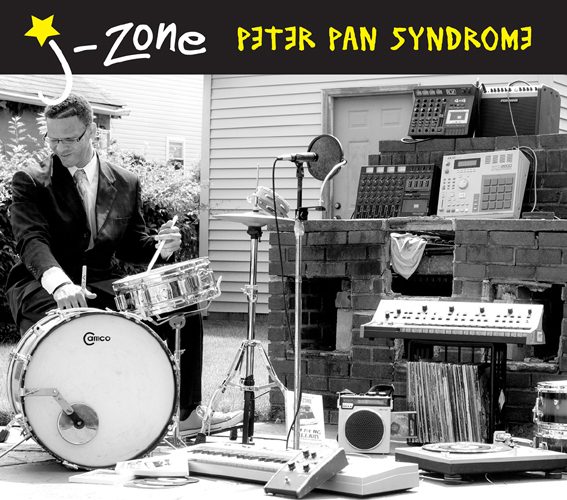 J-Zone unofficially retired. He had already written his swan song from the rap game, an expose entitled “Root for the Villain

” chronicling his own successes and failures in underground rap. Much like professional boxing though, retirement never sticks. There’s always that lure to get back in shape and get in the ring one more time to see if you’ve “still got it” as a fighter. Many of those same hopefuls end up tasting the canvas at the hands of a younger and often unheralded fighter who was itching to make his name, although now and then a George Foreman proves you can still be a champion at any age.

In many respects rap returns from retirement are less brutal than boxing, but take it from J-Zone, there’s no shortage of hard work involved. If you’re going to be your own producer, manufacturer, publicist and distributor, there’s ten times as much. J-Zone had every reason to retire, because the mountain of work that a struggling underground artist faces is far from glamorous to climb. Even worse is that no peak will ever be high enough – as soon as you reach the summit the fans expect you to repeat or exceed your previous feat for their entertainment. There’s no resting on your laurels, and though Zone has more than most indie artists, he’s still got to go out there and hustle like every album is the first he ever made.

The dangers of creating a tired and uninspired album with so many obstacles placed in your way certainly exist, but on “Peter Pan Syndrome” J-Zone has managed to either hurdle them or run straight THROUGH them, dragging them along behind. In explaining this album’s philosophy, J expressed a desire to inject the RAW HUMAN ELEMENT back into hip-hop – the same kind of gritty dirty rap sound heard on early Wu-Tang albums. You can feel free to agree or disagree, but in J’s view an album is better with mistakes. If you hit the rim shot when you meant to hit the drum head, leave it in. If the SP-1200 didn’t play back the samples right, don’t re-record it – keep the busted loop as is. This ain’t no joke – just listen to the end of “Molotov Cocktail” and you’ll see he’s proud of leaving the errors in.

To paraphrase J-Zone, rap is urban gritty and dirty, and the greatest triumphs of the culture are not necessarily the pristine studio sessions with 128 tracks and perfectly mixed vocals. It’s not hard to think back to songs by Run-D.M.C. or Kurtis Blow that could have been done better with a second take, or an Eric B. scratch on a Rakim track that was just a little off, but it’s the impurities that make those gems sparkle. Synthetic diamonds are as flawless as they are poor imitations of the real thing. “Peter Pan Syndrome” celebrates the gritty side of hip-hop along with the belief that growing up is for suckers – rappers can be immature in their 30’s and be proud of it. “Hog Slop” with long time friend Celph Titled reflects that perfectly.

Celph: “Plottin and schemin on D-boys for their packs of snow
And after I done snatched the dope, I’m drinkin some Jack and Coke
(You don’t get it?) Ain’t exaggeratin though!
Me and Zone got these evil tones broadcastin in European homes
Swing through on a Tarzan rope
And rip you out that Pierre Cardan coat”

Zone: “You the type to spell boy B-O-I and weigh less than your bitch
But only Celph can do that – he likes ’em fat
J-Zone don’t be lovin ’em, motherfuck none of ’em
Tell ’em Dookie! {I let ’em suck my dick, but I don’t be fuckin ’em}”

If you want an unapologetically raunchy, low-fi, gritty self-produced rap album “Peter Pan Syndrome” is for you. The presentation is only enhanced by the fact Zone decided to play the drum tracks on his own drum set, then record his vocals on a mic meant to record said same with INSTEAD of vocals. Every part of this album that’s technically wrong adds to the charm. It’s a throwback to the era of rap we’re all nostalgic for now. He provides his own skits with the help of alter ego Chief Chinchilla, and they’re funnier than anything on a big budget rap album. Just check out Chinchilla’s advice on “Trespasser” about how to keep New York true to its roots: “We need a crime wave, on some throwback shit – an Ed Koch era, good old Al Sharpton when he was 300 pounds in a jogging suit, and gold chains era crime wave. Checks and balances for transplants, that’s all!”

Much like “Root for the Villain,” the album accidentally on purpose becomes a celebration of being iconoclastic and not fitting into the cookie cutter molds of life. “Black Weirdo” may be a personal statement, but it’s also an anthem for anybody who wants to not embrace the mediocrity of mainstream or fit squarely into round stereotype holes. If you don’t know his pimp persona, then you may be surprised by hilariously offensive songs like “Miscegenation On Ya Station!” and “Mo’ Pork,” but long time Zone fans will get the joke with tears streaming down their faces. And on a closing note, one of the most humorously pimptastic songs may be “Gadget Ho,” the same track Zone released his FIRST EVER music video for. Don’t walk up to him a club with a cell phone asking for a picture, or this is the type of response you’re likely to get – unless you bought the album. You should. At $8 you’re getting more than you paid.