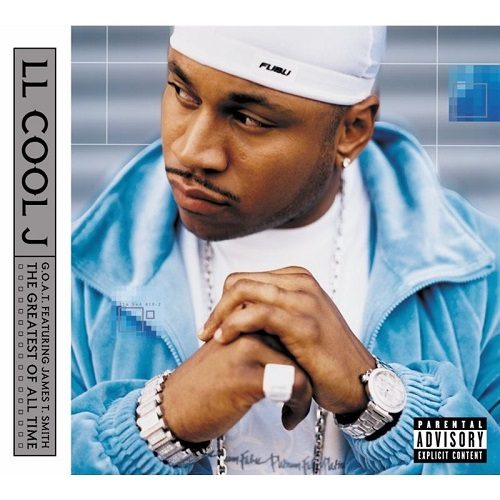 Throughout his career, L.L. Cool J has undergone a series of transformations. From hardcore B-boy to pop icon/ladies man back to hardcore B-boy to wannabe thug back to pop icon/ladies man to uninspired rapper turned actor trying to rap again. After the “Phenomenon” album, many doubted whether or not L.L. still had it. L.L.’s answer to them was G.O.A.T., perhaps the worst acronym ever thought up. And in fact, it leaves many questions unanswered.

You cannot deny the contributions that L.L. Cool J has made to hip hop. He was one of the first rap superstars, and was an integral part of the 1984-1987 period in which hip hop music (in my opinion) removed all doubt that it was just a gimmick and established itself as a legitimate artform.

That being said, I think that it is ironic that L.L. lists Evander “Real Deal” Holyfield in his shout outs, because their careers parallel each other in many ways. Both were once great, both did not know that it is best to retire on top.

Now, this is not to say that this is a horrible album. L.L. is not nearly as far gone as Evander is. The first single, Rockwilder-produced “Imagine That” shows that L.L. hasn’t lost his edge at least as far as the raps for the ladies go. Rockwilder gives us another headnodder, even though the recycled beats are unashamedly obvious.

Up next is “Back Where I Belong”, featuring a dope beat from Vada Nobles. On this track, he tries to reclaim his street credential and battle cat status. He also brings up Canibus. But in this instance, he takes cheap shots that end up making himself look bad. Instead of ripping Canibus and referencing mic skills (like he did on “The Ripper Strikes Back”), he starts talking shit about how he and Wyclef set Canibus up, how he stole money from Canibus’ album budget, etc. I don’t know if this is true or not; it doesn’t really matter. Either way, he’s bragging doing shit to Canibus behind his back instead of confronting him.

L.L. sounds foolish on “Fuhgidabowdit” with lines like “You say I’m souped up? Well soup’s good food”. Red and Meth steal the track, just as I expected they would.

“Farmers” featuring Tikki Diamonds is L.L. at his best. The chorus is goofy (a cheap rip off of Slick Rick’s “Spell my name out for you… R – ravishing” etc.); the F.A.R.M.E.R.S. acronym is almost as dumb as the G.O.A.T. But, the verses are dope. This is L.L. unleashing pure energy like he did back in the day. He doesn’t sound like his verses have too many words, and the beat is ill.

The two best tracks may be 14 and 15, “U Can’t Fuck With Me” featuring Snoop, Xzibit, and Jayo Felony, and “Queens Is” featuring Prodigy. Both of these songs featuring good beats, good guest spots, and L.L. spitting with fire.

If Rakim made an album called “Greatest Of All Time”, no one would bat an eye, because he has a legitimate claim to that title. But for L.L. Cool J to make such a claim takes a bit of audacity on his part. The bad news for him is that he’s not the G.O.A.T. ; the good news is that he isn’t the Goat, either. The problem is that on some of these tracks L.L. sounds as good as he ever did; on others, he sounds like a washed up 80’s rapper trying too hard to fit in with today’s artists. If you peeped my review of De La Soul, you know that I feel the key to success for 80’s rappers in these times is staying close enough to their old style to keep their old fans, but changing just enough to impress the new school crowd as well. When L.L. is most successful on this album, he follows these guidelines. If he had done so the whole time, this would’ve been a truly ill album. As it stands, its not bad but doesn’t come close to doing the title justice.