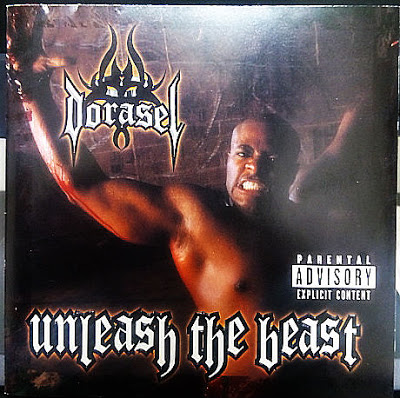 With the exception of Scarface and Devin, Rap-A-Lot doesn’t have that much to offer nowadays. If you want to compete in this rat race that is the rap game, you have to keep fresh talent coming in. Record labels can’t bank on their mainstays, they constantly have to reconstruct their rosters, so that this year’s rookie will one day become a champion. New talent should always get the benefit of the doubt. So let’s welcome Rap-A-Lot recording artist Dorasel.

I first heard ‘Doracell’ on the Geto Boys song “Thugg Niggaz” from ’98 where I initially mistook him for Scarface. He then received his full five minutes to fame with “Got 2 Be A Thug” off the “Realest Niggaz Down South” compilation. His performances were good enough to make me wait for him to put something out, but at the same time I knew I shouldn’t be expecting too much from a debuting rapper who twice in a row presented himself as a ‘thug nigga’. But while “Unleash The Beast” as a whole comes as a bit of a surprise (meaning he does better than I expected him to do), the album itself also somewhat of a disappointment. See, Dorasel makes much of that fact that he’s already spent way too much time in jail and that he will spend much more time in it if he doesn’t get his act together. Rap-A-Lot head honcho J Prince has presented him with an opportunity to break the cycle and Dorasel gladly accepts it. While it’s J who has – in both senses of the word – released him – a) from jail and b) as a rap act -, ‘unleashing’ his inner rap ‘beast’ is up to him and nobody else. It’s here that he fails. With Tech N9ne’s recent “Anghellic” album in mind, “Unleash The Beast” is just not that mindblowing as its appearance would make you believe.

Although the beast gets unleashed quite unexpectedly once the intro is over. The title track comes at you with such a fast tempo that once you have adjusted to it it’s already over. Personally, I can’t get over the purposely twisted pronounciation of certain words either to fit them into a rhyme scheme or just out of pure fancy (except you do it right like Scarface). Then Dorasel lacks vocal personality and presence. Vocally, he combines the forced delivery of the contemporary Cube with the reflective tone of Scarface. The only real plus is that he comes with different rhyme styles, something not many rappers are able to do nowadays. But lyrically he’s basically just adding up rhyming words, quickly revealing that he’s more the freestyler than the writer.

This is not necessarily a bad thing. You can tell a complete story just stringing up segments of a sentence, you can convey your philosophy like that, you can battle like that. The best example here has to be the finale, “War”. Producer 7 actually comes up with a track that sounds like a track called “War” is supposed to sound. Dorasel:

“It’s no negotiation, nigga, look at what you facin’
Annihilation, I specialize in confrontation
The frustration got these muthafuckas pacin’
No hesitation, I recommend amputation
My ghetto nation on federal investigation
Muthafuckas shakin’, the clock ticks to expiration
Interrogation, with my click on medication
No toleration, fuck your family embracin'”

Now if more cuts would be as convincing as “War”, then this album would indeed tower over all that superficial stuff that Dorasel naturally shys away from. But when you first have to make your way through a pile of half-decent club tracks (“Get Cha Hands Up”, “Bounce”, “Fuck Something”, “Get Ready”) and the usual guest appearances that vary from garbage (“Do The Math” w/ Yukmouth, Phatts Bossi and the Outlawz’ Noble) to smart shit (the bitter-sweet Carribean-flavored “Shame On It” w/ Castro and Napoleon of the Outlawz), you can’t really get into a proper “Unleash The Beast” type experience.

It may just be that Dorasel would much rather tame the beast that’s in him than to unleash it. “Them Fools” for example does not back down, but at the same time has Dorasel repeating that he won’t go back to jail. Therein lies the personally wise but artistically unwise contradiction. Subtract the egotistical frame of mind displayed in “Them Fools” and you have “Cold World” where we see Dorasel not only accepting responsability for himself, but also those close to him.

To sum it up, to really “bring this muthafucka to a screech” (“War”), Dorasel should have left the club tracks alone and get more in touch with this inner beast of his. In addition he can blame Rap-A-Lot’s in-house producers who themselves don’t seem to have any dangerous beasts – sorry, beats left to unleash.