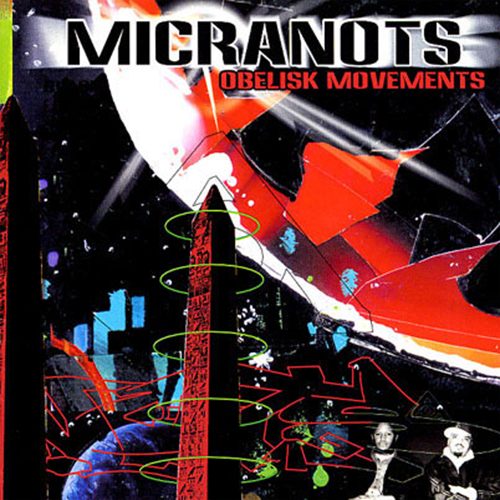 Do the Micranots represent a modern day hip-hop form of Egiptology (not EGYPT-ology, which is Western in form versus African) or borrow from the idea of the “obelisk” to represent a pillar of strength which stands tall on it’s own? Both. With their first full-length album (after such acclaimed singles as “Culture b/w Illegal Busyness”) the Micranots are here to build a new monument to hip-hop culture. In fact, in their view, an inverted obelisk is exactly the same as the needle point that hits the surface on a DJ’s vinyl. It’s a good analogy for their style of hip-hop.

From the opening bars of the “Intro” to the spartan beat of “Pitch Black Ark,” the sound is fierce and hardcore. Each song is an attack on wickedness; a righteousness similar to chanting down Babylon in reggae albums.

Even though the subject for I Self doesn’t hugely change, there is room for variation in his lyricism, the ways to attack wickedness and it’s many forms, and the production by Kool Akiem. “Preparations” has a marching piano riff where I Self’s never relaxed vocal tone is warning people to get ready to fight evil. “Culture” has a plucky guitar backdrop, some righteous Method Man scratches, and a pledge for the Micranots to protect the arts and black legacy.

Oh yes, the Micranots are pro-black in a way that hip-hop probably hasn’t addressed since the X-Clan. As the Micranots themselves say in the liner notes for “Good Heavens” without pulling any punches, “You will be served justice for your thieving treachery and deceit.” There’s really no question who +you+ is on an album with songs such as “M.O.V.E.” (dedicated to the heartless firebombing slaughter of pro-black activists in Philadelphia). Interestingly though this track is purely an exercise in Akiem’s sampling techniques and musical production; a short analogy with a powerful and surprising ending.

The presentation of I Self’s skills ranges from being as abstract as Kool Keith to as direct as Erick Sermon. The latter would be personified by “Illegal Busyness,” a song clearly mocking the hypocrisy of America’s war on drugs (which can often be read as a war on young black men) but the former can be as vexing to grasp as the album’s closing track “Exodus”:

“Synthetical crack smoke inhaled or suicide in jail
With Queens, postin the bail while intercourse
climax ejaculate, release chi collapse back
Escapism, meditation through ancient religions
I’m clearin the mental of high polarized schisms
Exempt restraint autocratic rule gets the blade to the artery
Display the artistry full not partially”

Given the depth of I Self’s discussional material, the heavy weight of Akiem’s beats, and the quality recording and mastering of the product; the total package presents an ambitious attempt to expand underground hip-hop while at the same time recapturing the more concious aspects of the art which are only touched on at the fringes by artists like Dead Prez – a sad fact considering in the heyday of Public Enemy such topic matter was status quo. This is a worthy album, and a challenging album. To appreciate the vibe, it may help to start with Akiem’s “Monuments” instrumental and find your mind and spirit re-aligned just as the megalithic obelisks and sonic elements are with his turntable.

For those who just want to hear millionaires rap about being millionaires, this isn’t your album. Not to say that sort of rap is in any way wrong; but to say that the Micranots are trying to feed you something of depth. If you sleep you’ll miss the dopeness of cuts like “Analyze,” the black love ode of “Queens Supreme,” the debunking of Western culture in “Iconoclastic” and even shoutouts to the ones who influenced them on “Sun Salutations.” The ocean is deep, are you ready to swim in Knowledge of Self? Then step to the Micranots. Otherwise just turn the top 30 back on and pretend you didn’t read this.