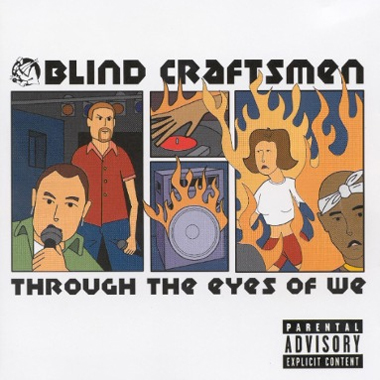 Blind Craftsmen :: Through the Eyes of We

Maryland really seems to be coming up in a major way on the independent hip-hop scene. Last year I reviewed the self-titled Melodramatic album, and this year the Blind Craftsmen are stepping up out of Baltimore to rep their home. Da Hill Records CEO Jefferson Slade thinks there is too much talent in the B and surrounding areas for them to not be making a mark, and judging by this album he may be on to something.

Right from the start, this album is exactly the kind of release I would proudly rock in my Discman no matter how many thugs taunted me as a “backpacker” – but don’t mistake me, the Blind Craftsmen are not “soft” at all. What works for B.C. is their fire and desire to be lyrical, and their self-produced beats – beats with plenty of thumping resonance. Matt and Keith (that’s right, they use their real names) live up to their music by going straight for the throat with verbal braggadocio, not even waiting to get all the way through the “Intro”:

“You listen to who? Motherfucking Blind Craftsmen
We dropped your garbage, like a clumsy-ass trash man
You can’t even go the places Keith and Matt went
We’re kicking your ass, like seniors to underclassmen
When skills are measured, you’re not even fractions
People buy your shit, I wonder what’s the attraction?”

These kids are NOT fucking around. Listening to this album you don’t get the feeling this is their first time around the block – they have a very professional aura to their beats, rhymes, and flows. Every “debut” album should sound like this. The illing synth-slide whine of “URBC” (featuring U.R.B) will pull you deeper into their raps, which are all “original, no clones.” The humerous “What About Me?” is a series of short vignettes about Matt and Keith’s adventures – going to a sex orgy, getting a job, having their album bootlegged and even getting into a car crash where everybody walks by and ignores the scene.

It’s hard to find things not to like about this sixteen track album. It’s humerous, bouncy, and laced with fat beats that don’t sound like they came from the latest James Brown or Parliament compilation. Just listen to the wind instruments of “Insanity” and then immediately guffaw as the words “I knew this chick named Bla Bla Bla, we were real close friends and shit – I know you think I’ll talk about how one day she flipped”; and throughout the song they keep illustrating how everyday acts by people turn into things that are completely nuts. This is what keeps B.C.’s album working throughout – not just having good flow, nice beats, or good snaps – but having the serious desire to craft quality songs the caliber of a narrative from O.C. or Jay-Z with their raps.

These trends continue with excellent songs like “Altered Reality” – a rap where they question the cliches of being hardcore in hip-hop. The background effect of rain spilling onto the concrete in “Rainy Night” is a sublime touch that adds to the texture of their lyrics. The only song that may be a little cliched is “Eternity” but you can’t expect a rap artist or group to not have a song dedicated to their fallen comrades on the album these days – the beats and rhymes are aight though. This is immediately rectified on the stomping “Y.D.K.M.” though, which goes for throat right away with the rap “If you think you have a reason why we shouldn’t – that’s another reason why I think we fuckin should!” (And if you didn’t catch onto the abbreviation yet, it stands for “You Don’t Know Me.”)

These guys are hellbent on attacking mediocrity and poking fun at commercial rap – “Don’t Dance” has an uptempo beat where they rap about rocking Timex (not Rolex) and STAINLESS STEEL (not diamond) earrings. It’s the ultimate anti-dance song – but for any friend who is tired of Puff Daddy it’s guaranteed to get a huge laugh; especially with the “la la la” voice chanting in the background. How they feel about dancing? “I leave that to pop singers, like that Brandy bitch.” This is my favorite part of the song though: “What’s the difference between club and house music?/They’re both annoying as shit, no matter which way you listen to it.”

It’s just ridiculous how good this album is for a group I had never heard of before at all, musically and lyrically. They’re coming from the “Deepest Reaches” with this one to prove they are “The Illest” on some “Grand Prix Shit” – the skits are good, the beats are good, and the raps will both make you laugh and jock for the quality of their writing. By rocking the mic as Matt and Keith, they stick to their theme of being refreshingly honest and down to earth throughout the whole LP, right up to the “Credits” at the closing. If you like independent label East coast hip-hop that showcases true musical talent, this album is a perfect fit.

Blind Craftsmen :: Through the Eyes of We
8Overall Score
Music8
Lyrics8