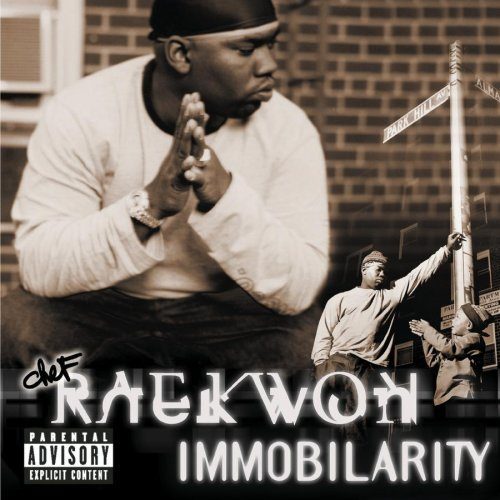 Once an artist has dropped a classic album, they are held up to the unfair expectations to do so again with each release in the future. Anything short causes rampant hating, talks of falling off, selling out, and other related activities. Raekwon is one of the artists who fell victim to some of this unfair criticism. The four years of anticipation built up between “Only Built 4 Cuban Linx…” and “Immobilarity” led to some of this; because the more anxiously the die-hard fans wait for an album the more viciously they will criticize if it doesn’t live up to their expectations.

So let me start this off setting something straight: Raekwon did not fall off – his beats did. What I can’t understand is this: if he wanted a sound distinct from his first album, fine, but why didn’t he enlist the types of producers he surely could have? Get DJ Premier, get the Alchemist, get Havoc, get Rockwilder… but why get Trauma D and Vo & Pop? Not that these guys are bad producers, but they’re perfectly average. Most of the tracks here sound like someone is trying to mix and match Havoc and RZA’s styles, but not succeeding, resulting in generic sounding beats. And why was Ghostface nowhere to be found, while American Cream Team was on two tracks? Again, it’s not like these guys don’t have any talent, and they are Rae’s crew, but no room for Ghost? The way I look at it, Raekwon is still Raekwon; his supporting case just wasn’t as strong this time around.

That’s not to say there weren’t some surefire bangers on here. The first song, “Yae Yo,” kicks the album off with some fire, as Raekwon rips one of the nicer beats present on “Immobilarity” with a crime narrative that could be right off “Cuban Linx”:

“Why this shit ain’t cooking up right?
Papi told me this is solid white
Fuck it, wrap it up, take it back up
Still and all, it’s a play out
Tired of spending money, might get them niggas laid out”

The beat for the next song, “Casablanca,” sounds like a cheap RZA impersonation, and pretty much dulls the impact of the lyrics, which once again were quality; the same can be said for the following “100 Rounds” while “Real Life” is one of the doper tracks on here, featuring some of Rae’s trademark storytelling skills; the beat is nondescript but more interesting than the majority on the album.

The Lionel Richie-sampling “All I Got Is You Part II” featuring Big Bub is the R&B flavored cut of the album, but it’s cool, cuz it’s old school R&B. Raekwon reminisces on old times; a winner. “Jury” is another one of the better tracks here, because the beat has a long piano loop rather than the simplistic ones that are present on most of the album. Raekwon comes correct, not at all wasting one of the truly dope beats on the album.

And speaking of ill beats, there is definetly one on the lead single from the album, “Live From New York.” This is a bonafide heater, with Rae dropping some nice flows if not his very finest lyrics. On a side note, if you’re ever trying to impress someone with your system, this is the song to use; this shit hits HARD. “Friday,” another crime story, features one of the nicer beats “Immobilarity” has to offer, and Rae roasts the track, bringing memories of “Spot Rusherz”, once again doing his best emulation of Kool G Rap’s style.

Pete Rock pops up, the only big name producer present on the album, and laces Raekwon for “Sneakers”, a track about someone obsessed with buying the flyest kicks. The track is pretty nice but doesn’t represent Pete’s best work. Still a nice song.

From tracks 17 through 19, the beats go the bouncy route. I have no problem with this; I thought Rae sounded DOPE when he destroyed the track when he appeared on Tash’s bouncy “Rap Life”. The differences is that was a tight, original sounding bouncy beat. “Raw” is as cookie cutter as a track can get. “Pop Shit” sounds like a weak ass Swizz Beats knock off. Swizz Beats isn’t that great, but his worst beats sound like masterpieces beside this. It’s so annoying I can hardly pay attention to Rae’s lyrics. “Heart to Heart” falls into the cookie cutter category that “Raw” did.

While Raekwon didn’t rip this LP quite as nicely as he did “Cuban Linx,” he still deserves to be looked upon as one of the best MCs in the game. He still spits some of the illest multisyllable rhymes and flows around, and no doubt has the ability to drop another classic album. With a new album due out this spring/summer, we can only hope that Rae enlists the help of some of the game’s top producers, who, aside from the lone Pete Rock track, were not present this time around. This album is still well worth buying, and the disappointment comes, not from wackness, but from knowing that it wasn’t everything it could have/should have been.