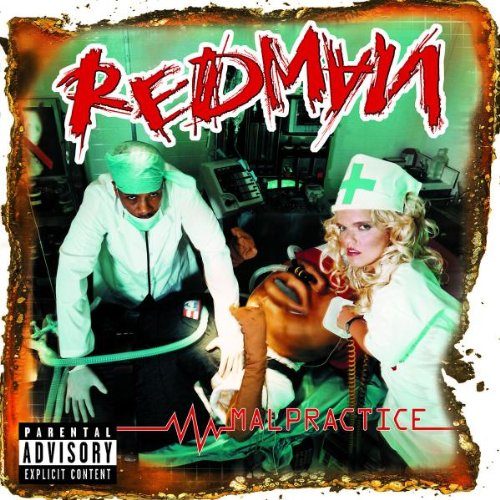 There’s a lesson to be learned right off the bat in the intro to the new Redman LP “Malpractice”: the word “cunt” is only acceptable when some limey Brit is spitting it out. Otherwise, you’d just get kicked in the dick for even THINKING that shit.

“Malpractice” is the latest Redman offering to you stankin asses, hoping to bring it a little rawer, a little more Funk Doc bastard style than his last LP, the mildly disappointing “Doc’s Da Name.” While it had it’s share of definite bangers, it seemed to be a sleepwalking kind of album, phoned in without a great deal of effort.

After the aforementioned intro (which is cool, because British blokes cursing at people is ALWAYS entertaining) we get a slice of “Doc’s Da Name” again — a tired remake of “The Doc and The Doctor” called “Diggy Doc.” Not only is Redman not ripping the beat as well as D.O.C. did in the first place, but Erick Sermon’s recrafted it and took away most of it’s power.

Luckily the next two tracks, “Lick a Shot” and the single “Let’s Get Dirty” liven the shit up a little. Where “Lick a Shot” relies more on smart ass style and funk swang, “Let’s Get Dirty” is more club styled cheesy synth fun. Straightforward slab of funk here, like Doc just picked out two keys on the keyboard and beat the shit out of ’em. And it probably works better in the club than it does at home; but the shit still works even with DJ Kool showing up for no explainable reason.

And from there on, the album settles into it’s typical Redman groove: smart assed, shit talking, funk soundin styles — but there’s a twist on this album though. Redman hasn’t made so much a new album as a sequel to the old one. There’s blatant examples of this such as “Doggz II” and “Bricks Two,” which both improve on the originals. Also, the obligatory “Soopaman Luva 5” sequel is here, which deal with the theft of ‘mojo’ this time around.

This Redman album probably has more guests on it than any other Redman album has. On some tracks this works REAL well, like on “Real Niggaz” where a farting keyboard funks the joint while Scarface, Jamal, Treach, and Red spit their usuals (well.. Treach is kinda weird to hear because somethin’s up with that guy, I dunno). On others it doesn’t succeed like “Enjoy the Ride” with Method Man and Saukrates, and “Dat Bitch” with Missy Elliott which has an irritating beat and a high speed tempo that doesn’t lend itself well with the slow drawlsy flow that Redman flows the best with.

And oh yeah, the skits — can we cut this shit WAAAAY back? Sure, Red is like one of the few who knew how to do it right, but Red’s just recycling the same ol’ characters and skits anymore. There’s a laugh or two to be had on first listen, but this shit is gonna irritate the fuck out of you on third listen. That’s not to say this album is shitty though. I mean, the return of Keith Murray on “Wrong 4 Dat” is head nodding, and it’s great to hear that motherfucker on a track again. “Da Bullshit” with Icarus bounces along nicely and the sparse beat perfectly compliments Redman’s delivery. And “J.U.M.P.” with George Clinton is probably the straight up funkiest shit he’s done since “Whut? Thee Album.” It’s definite Red rewind material.

The shining jewels on this album are Red’s solo tracks, which makes one wonder why he stacked so many guest artists on in the first place. For example, check the drama and raw power of the Adam F produced “Smash Somethin, or the slap bass soundin “What I’ma Do Now?” With the sludgy stanky hump funk of “Muh Fucka” bangin at your head, why clutter it up with MC’s other than Redman anyway? Not too many MC’s know how to flow over funk anymore and the few that do like Redman we want to hear as much as possible.

Still overall it’s something of a minor sticking point. This album IS a more satisfying effort than “Doc’s Da Name” on the whole. While it doesn’t have a jam that jumps out and slaps you around like “I’ll Bee Dat,” you’ll find yourself nodding your head along for almost the whole duration — not to mention the times you hop up and shake your stankin ass. Go ahead and hop on the roller coaster of “Malpractice”; it’s a funky little ride.