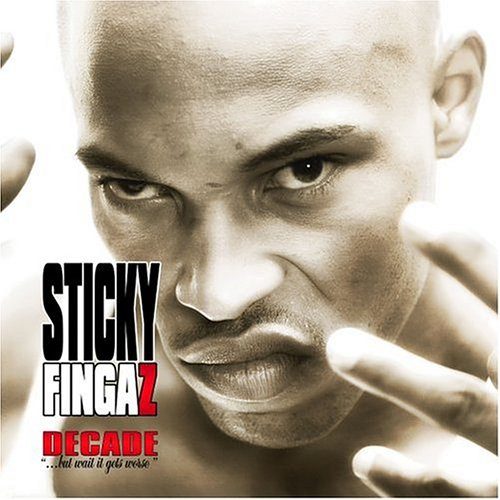 The bald headed terror is back, and it’s not another episode of the hit TV series “Platinum” – although you CAN catch him there as the intense Grady Rhames. Fingaz is returning to his first love, and that’s ripping the mic with so much intensity they short out in his hands. If you heard any rapper in the last decade that you liked who screamed into a mic, it was either Sticky or somebody ripping off his steelo. Unfortunately Sticky’s had a hard time finding success outside of Onyx. He released the critically acclaimed “Black Trash * The Autobiography of Kirk Jones” in 2001, and like far too many critically acclaimed rap albums it went double wood in sales. As a result Sticky attempted a reunion with his old group on 2002’s “Bacdafucup Part II,” a less interesting album that made “Black Trash” look AND sound double-platinum by comparison (no pun intended). His raps were the album’s highlight.

With the aptly named “Decade,” Sticky proves that he’s not out to drop out of rap music industry for acting full time. This time, there’s nothing conceptual about the album – no skits with a rapper on the run, no conversations with God and the Devil, just mic skills and beats. This more down to earth approach should win back some fans who felt Sticky had gotten too esoteric, especially with songs like his self-produced “Caught in Da Game”:

“I made a promise, not to go back to jail
Under my garments, gun tucked, PACKIN THAT STEEL
But regardless, this nigga here is out of the field
Now my partners, it’s only money that’s real
[…]
Now peep the hooptie, I’m followed by my crew
Hundred thou’ of jewelry when the God come through
I kept it thorough with my ear to the streets
And now we gettin Cash Money without the gold teeth”

Sticky on tracks is like an angry pitbull tethered to a pole with a frayed rope – sooner or later you have to expect it to snap and the dog to attack. His voice, even when speaking softly, is so gravelly and menacing that it’s hard to imagine him ever smiling – except maybe a heartless grin when he’s standing over the body of an enemy. Despite that there are a few times when the uber-thug of rap attempts to switch up a crossover hit, such as on the lead single “Can’t Call It” produced by Scott Storch and featuring Missy Elliott. Well, to clarify, it features what’s a sample of Missy in the chorus. She’s not credited in the liner notes nor does she do her rap thang anywhere on the track; but Sticky does give her a shout out at the beginning. Either way, hearing a “jiggy” track from Fingaz is somewhat odd at best:

“I got a big flamethrower, big Range Rover
And when we come to a party you know the thang over
BLAOW! Shorties seem to just come to us
And with the banginest body you know what we be doin
WORD UP, air it out, just give it to us
We ain’t takin advantage, they said they wanna do it
… I gave drunk dick to her
You can ask her later what the Remy did to her”

In fact, the feeling one gets in general listening to this album is that Sticky isn’t quite being Sticky. We’ve heard him rap more quietly without yelling and shouting in the past, but a whole album of it? That would be like a whole album of LL rapping like his song “Phenomenon” or Busta rapping a whole album like his “Put Your Hands Where My Eyes Can See.” It may work in short doses, but by going completely contrary to their style it only makes you want to hear their manic energy even more. Unfortunately this album repeatedly fails to deliver. It has songs like “Hot Now” that are slow paced, soft-spoken, and completely unlike the ominous rapper who once threatened to hold up Def Jam and take Russell Simmons hostage for ransom. You’d think “I Love Da Streets” would feature that Onyx intensity, but instead it features a cheesy G-Funk style and a cameo byOMAR EPPS. Would the self-produced, ominously titled “Bad Guy” deliver? No, Sticky is still speaking softly, never wielding his big stick. There’s a lot of songs with sung ballad hooks, like “Girl” and “No More.” Huh? What? What the fuck ever happened to “THROW YA GUNZ IN THE AIR, AND BUCK BUCK LIKE YA JUST DON’T CARE!“

To say this album lacks intensity is an understatement. Scott Storch is a great producer, but he’s better known for making smooth tunes with The Roots and “backpack” rap artists, so while his contributed tracks all sound good they’re not a good match for Sticky. The other contributors are all variable quality. Porky hits a rare moment of intensity with “Shot Up” and then kills it off with the cheesy “I Don’t Know” – the UMPTEENTH rap song to feature a bunch of little kids thinking it sounds cute. Yeah, it does, and I’m fucking sick of cute. S-Man’s work is take it or leave it, although I’ll take it on “In Da Streets” – a rare case of Fingaz growling and screaming his head off like the rapper we all know and love. (On the album this song is incorrectly labelled “Suicide Letter,” which actually comes after it.)

“When you clingin on to life, who gon’ be there for you?
Get blood on they seats, drive you to the hospital
NOBODY (NOBODY!) Cause you goin to hell
I got an image to protect, and records to sell”

Well, he’s right about the last line. While this album may push units due to his burgeoning fame, it’s definitely not the Sticky of old that once scared an entire hip-hop nation into shaving their heads bald in a “get with us or get shot BY US” paranoia. While occasional songs like “Get Smashed Up” capture that old vibe, songs like “What Chu Here For” miss it by a mile and a half. Sticky is still capable of narrating raps that make you visualize life through his eyes, and still has a smoldering voice that paints ghetto portraits with his flow, but after too much soft spoken, smoothed out, R&B style raps, you may think the fire was put out and all that’s left IS smoldering ashes. Next time, let’s hope the fire is a little hotter.