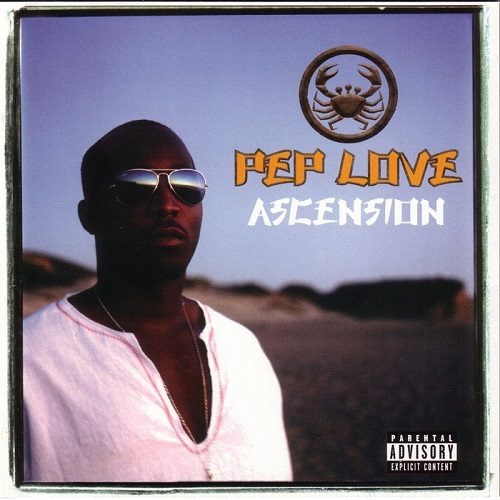 Few people can get away with saying they are “the most anticipated” and not come off sounding self-congratulatory, but Pep Love could probably do it and not be hated on. He’s earned the right, because he is arguable the most underrepresented rapper in the West coast crew of hip-hop heavyweights hailed as the Hieroglyphics Imperium. Indeed, Pep Love has been putting his work in for years, with appearances on such hip-hop classics as “Undisputed Champs” with Del the Funky Homosapien and Q-Tip and underground hits like the “Crooked Angle” twelve inch and “Trinity Lost” from the “Defenders of the Underworld” compilation.

The only real reason Pep Love hasn’t blown up yet is that more people haven’t figured out who he is, despite shining every time a fellow Hiero would pass him the mic or a college DJ would spin his cuts. With the album “Ascension” he’s set to change that; even launching his own Pep Love site outside of the Hieroglyphics home page to gain greater exposure. In praise of this site it’s worth noting he is even willing to give away free MP3’s from “Ascension” to give people a taste of his LP and spur sales. The music industry could learn a thing or two from this kind of progressive thinking.

Among the tracks you can grab at the site are the smoothly melodic narrative “Living is Beautiful.” These lyrics are so heartfelt and so poignantly delivered that they offer little excuse for rappers who say that anything but a hardcore attitude can’t succeed:

“And my duty is to exercise, spread my wings
Let the stress subside, but my breath just seems
to be taken away, as I’m making my way
up the pavement, intent on makin my day and hey
the pleasure I receive’s, beyond measure
because I believe, I can control the weather
And I choose the sunshine, even though sometimes
it rains, my head never hangs in the confines
of solitude..”

Listening to this song is like taking a cool shower after spending all day working in the hot sun – you end up feeling refreshed both physically and mentally. Pep is definitely on some “I’m not gonna thug it up to sell records” shit, and deserves all the praises due for not being afraid to take chances and expect the audience to come up to his level. With songs like “US” he directly breaks down fallacies when he says “hang out your hang-ups to dry – for these are merely barriers between you and I.” On the darkly groovy synth sounds of “My Energy” he spreads out that positivity to fill the world around him and make “ripples in reality” and “create galaxies.” If you can’t feel it pulsing around you, turn the volume up some more and absorb the vibes.

On an album this good with no skits acting as filler, sixteen tracks seems much too short. From the title track “Ascension” through such choice selections as the transcendent “A New Religion” anybody who appreciates the pursuit of higher music goals will be wide open. The spine tingling music on the Eastern AND West Indian influenced “Karma (The Snake Charmer)” will even send cold chills running down your spine. With tracks produced in-house by Hieros such as JayBiz, A-Plus and Domino plus outside work by DJ Babu & Evidence (Dilated Peoples) there’s really not a single song you can call weak or wack. The Hieros also show love lyrically, with the strongest of all performances being Casual’s guest rap on “If You Can’t Beat ‘Em” – like Pep Love, we need to be hearing MORE from this rapper, not less.

There’s really no question about purchasing this album for anybody who wants to hear hip-hop done the way it should be let ALONE fans of the Hieroglyphics style and sound. From the opening words spoken by Lawrence Fishburne (sampled from “Deep Cover”) to the closing cut “Black People (Melanin Magnetic)” this album is likely to go down as one of the tightest-laced projects the Hiero Imperium has ever presented to the public – worthy of such classics as Del’s “No Need For Alarm”, Souls of Mischief’s “’93 Til Infinity” and the “3rd Eye Vision” compilation. Any fan of uncut and unbridled positivity focused through the lens of fat beats and rhymes has no business NOT purchasing this album – it’s that crucial. Don’t front on Pep Love – it’s been a long time coming, and the wait was definitely worth it.