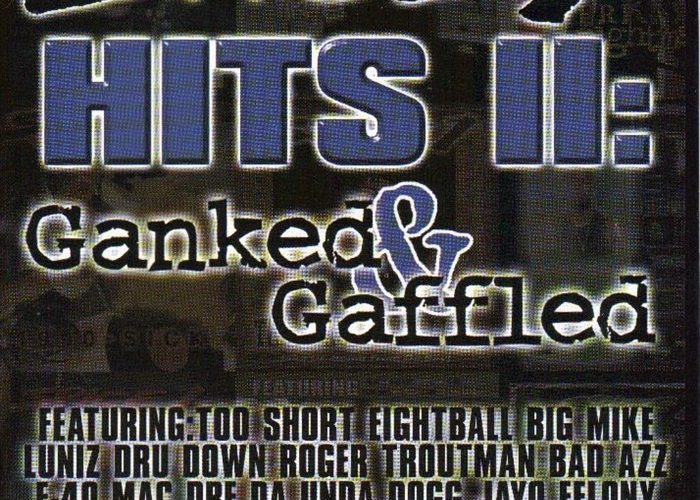 Three years after being bowed (or was he booted?) out the door by Jive with “Hits”, Spice 1 serves up some more of his past accomplishments on “Hits II: Ganked & Gaffled”. Between these two ‘best of’ collections, Spice has released two more solo albums and one compilation. Considering that Spice 1 is probably the rapper who’s had the most nationwide available solo album releases in the ’90s (6), releasing two hit collections is far from preposterous.

Missing from “Hits” was “Strap on the Side”, which was released as a single, so it’s good to hear this ode to staying strapped open up “Hits II”. There’s also the plush Paris-produced “Playa Man” (which last time around was suspiciously absent) and the equally calming cruise offered by “Mobbin'”. Following the trend, this album boasts a string of guest appearances, thankfully also including some of those Spice made on other people’s albums. Included are E-40’s “Dusted & Disgusted” (w/ Pac and Mac Mall), Big Mike’s “Twirk It” (w/ Jayo Felony), Eightball’s “360 Degrees” (w/ 40 and 4-Tay) and the ‘Bay Ballas Remix’ of “I Got Five on It” by the Luniz with only the best of the Bay (Shock G, Dru Down, 40, Richie Rich). Who I haven’t met but is advertised on the cd cover are Mac Dre and Da Unda Dogg. The best posse cut included on “Hits II” comes courtesy of one of his own albums though: the Rick Rock-produced “Suckas Do What They Can” with sometime adversaries Yukmouth and Too $hort and the late Roger Troutman. For those who like their funk heavy, that’s already a platter that’ll make your stomach rumble.

Beats he’s always had good and plenty, but what makes Spice 1 unique is his flow on the mic. Even though Spice keeps it gangsta 9 times out of 10, it would be unfair to just put him in the gangsta category, as some people automatically associate that with having no skills, being destructive and contradictory to hip-hop ethics. But unlike other rappers in the genre, Spice doesn’t just stand in front of a microphone reciting verses he’s written down, he approaches the mic like a true MC would: he comes up with different styles (some of them ragga-influenced) while most of the time managing to stay true to his trademark fast flowing style. You might even consider him the originator of the triple cadence staccato styling that was later popularized by Bone Thugs-n-Harmony and others, but instead of constantly being ahead of the beat, he’s going against the beat, rapping to it and with it, making just the right adjustments to the beat’s structure. That way he makes rapping sound really easy. But once you get into detail, it becomes extremely complicated. On tracks like “East Bay Gangster” and “Mo’ Mail” it sounds like he decided for every single sentence how to say it, how to accentuate it. The point I’m making is: There are not many rappers who put as much work and thought into their delivery as Spice 1.

Looking into the lyrical content, Spice 1 has, especially lately, not diversified. He is clearly a rapper who chose to limit himself as far as subject matter goes. Gun talk runs rampant here (“Peace to My 9”, “Strap on the Side”, “380 on that Ass”, “Doncha Runaway”), but Spice does not fail to explain why his characters rely on firearms, as exemplified in “Runnin’ out da Crackhouse”, a carefully crafted tale which has its protagonist shooting it out with rival dopedealers, cops and canines and eventually ending up in custody, all the while hiding crack in his mouth. Picking up where “Runnin’ out da Crackhouse” left him is “Face of a Desperate Man”, where he is released from jail only to be at it again:

“Smellin stale, fresh out the county jail
Coppers gave me hell in the cell
but now it’s mo’ murder to make mail
They thought my heart was playin’ life at a different pitch
but I stick to the script: dump a snitch in a ditch
It’s ’94, I can’t be fuckin’ around
Paranoia of a jack, so I’m quick to draw down
The only way I gets my mail is to be off in yo ass
with a A.K. or a Uzi screamin’: ‘Gimme yo cash!'”

Only one song on “Hits II” should not have necessarily made the cut — the generic “380 on that Ass”. Instead Spice could have treated us to songs off his ’91 debut EP “Let it Be Known” that weren’t included on 1992’s “Spice 1” (like “Ghetto Thang” or “Let it Be Known”). Also, there’s a few more guest appearances Spice made that call for “Hits” to have another sequel: CMW’s “Nuthin’ But The Gangsta”, The Coup’s “Santa Rita Weekend”, “The Dangerous Crew”, S.C.C.’s “Gangsta Team” or Pac’s “I’m Losin It”. Still, the hits on this album keep coming and the beats keep pounding while you get to witness one of the fiercest MC’s the West Coast and rap in general has to offer.