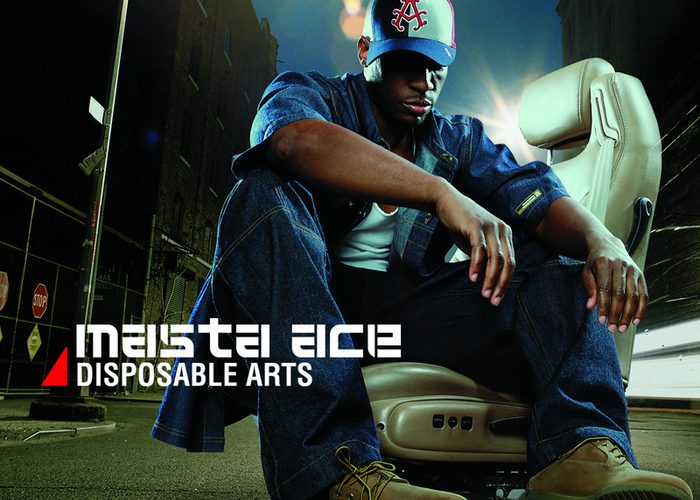 There’s a lot of people who probably thought Masta Ace dried up with “Sittin’ On Chrome” (one can only imagine what a 2001 version of the video would look like), and a select few who probably believe he never did anything better than “Me And The Biz”. In truth, Masta Ace has been laying low in the last few years, which is a shame since the man was considered by some to be one of the best MC’s out there, underground or otherwise. “Disposable Arts” shows that the man has missed a lot in hip hop’s last five years, but he proves that he is up to the challenge. One of the great things about Masta Ace is that he and his voice is able to embrace any musical landscape, which goes back to his glory days with Cold Chillin’. “Something’s Wrong” begins with a synthesized acoustic intro that might sound like every other TLC/Pink/LaFace track, but the drum machine kicks in and when Ace’s guest Stricklin opens his mouth, you can tell he’s not looking to the past:

“Incredible rhymer, what the hell I gonna sell crack for?
I’m real, you an ac-tor, ha, you is not a fac-tor
You on some ‘about to do’, I’m on some ‘already done’ shit
I’ll burn you with the same lighter you just lit up your blunt with
And I done came with the style you probably about to come with
You the opposite of smart feces – Get it? Dumb shit?
Don’t give a fuck who you run with, all the niggas you about to go get
Matter of fact, go get ’em, you’ll just be laying on the floor with ’em”

Just because you haven’t heard from Masta Ace in a while doesn’t mean he’s been clueless as to what is going on. The rest of the song has him going through some intelligent verbal attacks, and the Disposable Arts he talks about happens to be the music he’s fighting for.

The album is actually a concept album, where Masta Ace goes back to school, but in truth it is the listener who is being taken back, and Masta Ace is the teacher. Like most teachers, he will offer the consequences to all juvenile delinquents, as he does in “Acknowledge”:

“One thing, who named y’all The High & the Mighty
to me, you all sound like a couple of high whiteys
who had to be on mad coke and ecstacy
and think for a second you could stand next to me
look, don’t ever again mention my name in your freestyles
or I’ll cut up your transmission faster than Lee Miles
and I heard your album, it must be something you’re new at
’cause I’d rather hear a Lil’ Wayne and Lil’ Zane duet
my cell phone stay ringin’, like a slap in the ear
so I hope y’all don’t plan on making rap a career
’cause ever since Heav’ was in Vernon, I been burnin’
next year y’all be up in Rawkus, internin’
and I should’ve let it known what your government names are
and make sure you +Take it Personal+ like Gang Starr”

This is one album where you will be saying “Oh shit” every other line, because Masta Ace is out for the kill, whether it’s other rappers, hip hop in general, or when it’s time to bust out the sex rhymes, as he does in “I Like That”. Here, he gets help from a group of guys named Punch and Words, but they’re not needed here. One could also say that the song itself doesn’t belong. Really, do you want to hear a line like “When we fuck, your face wrinkle up like a Sharpei”? The sex rhyme is a hip hop tradition, and while not as clever as a Kool Keith or Princess Superstar line, it works.

Fans of Masta Ace have always liked how he embraces the sounds of the East and the West, although with the Dirty South taking over things, “P.T.A.” (which features J-Ro and King Tee) comes off as something to include on the album “just because”. Digga’s appearance in “Type I Hate” is easily one of her best verses to date, and on an album that really doesn’t need cameos, Digga’s presence comes off as a means of brotherly support.

As the line goes, it’s been a long time. Rather than try to fit in with the current styles, Masta Ace takes his skills and unleashes it to an unknowing public. Unknowing, since the majority of today’s hip hop heads don’t even remember when Jay-Z refused a taste of kalua pig in the “Hawaiian Sophie” video. Masta Ace’s skills hold up today, not only as a veteran of the genre, but as someone who hasn’t allowed himself to dwell in what many consider his glory years. “Disposable Arts” is Masta Ace in modern day glory, and this will hopefully be the album he will be remembered for. Lyrical masterpiece.