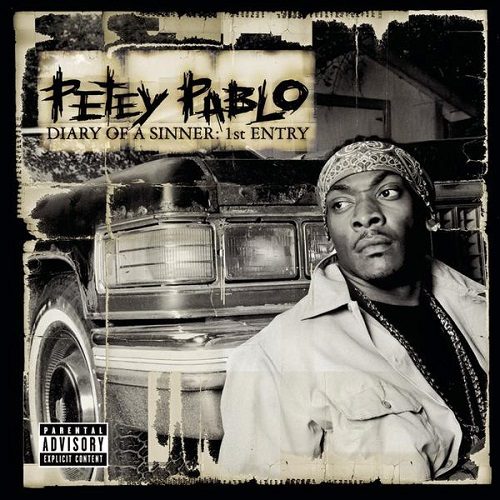 In case you thought the only thing coming out of Jive Records these days was boy bands, you’ve got another thing coming. November is shaping up to be big for hip-hop at the label with new albums from U.G.K., Too $hort, and Petey Pablo.

Petey who? Oh I’m sorry, you must not have heard his anthemic song “Raise Up” – it’s only been played once every five minutes on radio and television for the last three months. With everybody’s flavor of the minute Timbaland on the beats and Pab’s infectious war-cry to “take your shirt off, twist it round yo’ hand – spin it like a helicopter” the track had the fuel to take off like a rocket, and it still hasn’t come down to earth. In fact, the song is so ridiculously popular it spun off TWO remixes: an “All Cities” remix included on this LP giving shouts out to metropolises across the country (the original only shouts out North Carolina), and an even NEWER “USA Flag” remix is a tribute to the victims of September 11th and American soldiers fighting terrorism in Afghanistan.

Jive Records obviously assumed the formula “if it’s broke don’t fix it” was 100% true because “Raise Up” is immediately followed by two more Timbaland tracks: “I” and “I Told Y’all.” With three of the album’s first four songs carrying his signature style, the distinctiveness of Petey Pablo’s rap is actually diminished. That’s not to say the songs aren’t good – they are – but it makes his album easily interchangable with Bubba Sparxxx, Ginuwine, or Missy Elliott. Next up is “Didn’t I,” which was also on “The Fast and the Furious” soundtrack. Pab’s flow on this track is pleasantly laid back and low-key, but conceptually the lyrics are highly derivative of a style Juvenile introduced to the nation with “Ha” on his “400 Degreez” LP. If you hadn’t already guessed, he ends almost every line with “didn’t I” or the word “didn’t” and some posessive pronoun.

The problem here is that the catchy “Raise Up” did succeed in raising something up – expectations of originality. The problem is that over time all of the songs here sound derivative of something else you know. “La Di Da Da Da” sounds like Jagged Edge’s “Where the Party At?” with Nelly, “Funroom” sounds like Sir Mix-A-Lot’s “Mack Daddy” with a Southern twist, and “Y’All Ain’t Ready” is like a Neptunes track without a beat. Seriously, after thirty seconds of what you assume is the intro of the song, you expect the drums to come in – the problem is that you keep waiting and they never do. What’s even worse is that Petey Pablo raps “I’m the one that’s gon’ carry Jive past N’Sync status.” The line immediately afterwards is Petey repeating “I can’t believe he said it” over and over again, which will eeriely echo the thoughts in your own head.

Petey Pablo does showcase some talents that were worthy of him being signed to a record deal – a charismatic voice, excellent breath control, and the ability to match the energy of his delivery to whatever beat he is supplied with. He even raps to a triple time beat (1-2-3 1-2-3) on the song “Live Debaco” but unfortunately this too is a concept that’s already been done before – most notably by Guru on GangStarr’s “Stay Tuned” among others. At some point you actually start wishing Timbaland HAD produced the whole album. Even the normally reputable Eric ‘Vietnam’ Sadler from Public Enemy’s Bomb Squad turns in a boring beat on “919,” which I can only assume is Petey Pablo’s area code in North Carolina. Hmm, area codes.. didn’t Ludacris already do this one too?

The only song that really stands out from the norm throughout the whole rest of the album is “Fool For Love.” An excellent sample of Jimmy Ponder’s “A Trip to the Stars” weaves in and out of the track, while Petey Pablo breaks down the his personal struggles of trying to stay committed and finding out he’s actually “a motherfuckin fool for love” who’s getting played. The smooth flow and cold story Petey tells makes the whole song reminiscent of the best raps of artists like Devin the Dude, Scarface, and Tela. The Southern in Petey stands out nicely on this equally tragic and humerous song.

With more songs like the swinging “Test of My Faith” and the title track, “Diary of a Sinner” would be something to write home about. The sad fact though is that the continuing re-remixes of his smash single “Raise Up” lead one to believe Jive Records is not interested in his diary, but instead milking as many artificial and derivative hip-hop hits out of him as possible. Pablo shows flashes of brilliance throughout this album – especially on the second half of the CD – but a lack of top notch tracks and ear-catching lyrics buries this diamond of the South up to his neck in mud. If Jive is not too short-sighted, Petey Pablo can release a followup album which washes away the mistakes – polishing the rest up to a keen shine.