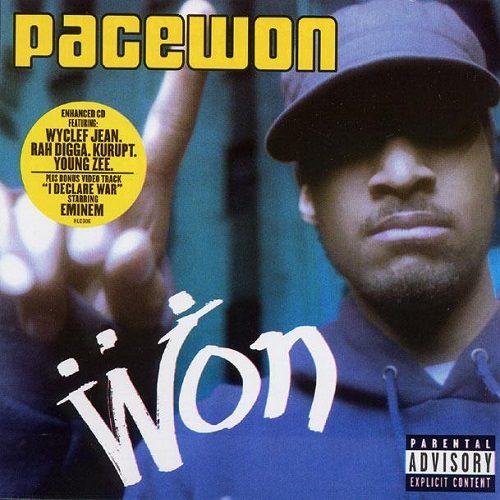 Do you remember these words from 1996?

“Who’s the desperado, sellin bottles in the alley
On some villain shit, wearin a +Mask+ like Jim Carrey (bing!)
With his gat cocked, stinkin up the crack spot
Pacewon dies with both eyes on the jackpot”

That was Pacewon’s world debut on “Cowboys,” from the Fugees multi-platinum crossover sensation “The Score.” Lesser rappers have converted lesser cameo appearances into hit singles and full album deals, yet the talented Pacewon has been bouncing around the underground rap scene for the last six years. It hasn’t all been bad though – in fact, Pace is actually blessed considering he’s as yet the only star to rise from his talented rap clique The Outsidaz. 12″ singles like “I Declare War” and “Sunroof Top” are hip-hop classics, and his solo cut “The Rah Rah” from the Outsidaz “Nightlife” EP was a HUGE crossover hit in 2000. Now in 2002 is the time for Pace to make good on his own words from that song’s chorus: “You better step up, step up, step up!”

Long-time Pacewon fans will recognize a lot of songs here from his unreleased (or promo only) album “The Pacewon Effect” that was widely bootlegged online and appears in any Outsidaz discography. If you enjoyed that release, consider buying “Won.” The nine songs culled from this album are all jams, including “It’s Yours” with Wyclef Jean, “Money Hungry” with Rah Digga and the old-but-new recent single “Bring it Out of Me.” The only notable songs not included are the trippy horn funk of “Oriental” and “Secret,” also the B-Side of the aforementioned single. Those who buy this album that never heard the bootleg MIGHT want to look for downloads of those two songs.

If the idea of buying an album with nine recycled songs doesn’t thrill you, whether you heard them or not, maybe songs like the harp-infused hip-hop bomb “Locked” and the guitar-strummed “You” culled from his more recent 12″ singles will please you. Those still griping about re-used songs should fear not; there is plenty of original material here too. Including the title track there are at least seven original songs you’ve never heard on ANY bootleg or twelve inch. Notable among them are songs like “Rush”, “What You Know” with Kurupt and Young Zee, “Fresh”, and “Cowboys & Westerns” where Pace tells a story like only Pace can:

“I light a spliff in a instant, watch the verbal lynch-men
Dresses in crimson, do movies like Mel Gibson
Ski a kingpin, we keep the people steppin
He my partner like Danny Glover Mel’s in ‘Lethal Weapon’
I’m Pacewon, well known to flip fags
Wise the eye on Wise potato chip bags
I zig-zag, laugh at guys I agonize
A faggot dies, my rap sting like dragonflies
Huh – just two of my rap samples
make rednecks with banjoes sing like Luther Vandross”

Pace’s gravelly voice and lyrics that seem both simultaneously clever and MAD STUPID are the unique combination that make him second to none in rap, save maybe for R.A. the Rugged Man or Thirstin Howl III. Unlike them, he actually knows how to flow on beat, and his man Ski from Roc-A-Bloc produces beats second to none. Yes, the same Ski who worked with Jay-Z on “Reasonable Doubt,” and his productions here are no less stellar. If all of this STILL doesn’t convince you that Pacewon deserves your hard-earned dollar, here’s one more factor to consider: this is a DOUBLE DISC album, and the second disc has FIVE MPEG movie files of music videos featuring Pacewon – yes, even “The Rah Rah” video is included. This is such a good idea that it’s a wonder MORE rappers haven’t done it already, but give RuffLife Records the credit for being trendsetters in the industry. For all of these reasons and more, Pacewon’s “Won” is a smorgasboard of rap delights for all of those who love the Outsidaz, Pacewon, or hardcore raps from New Jerusalem in general!