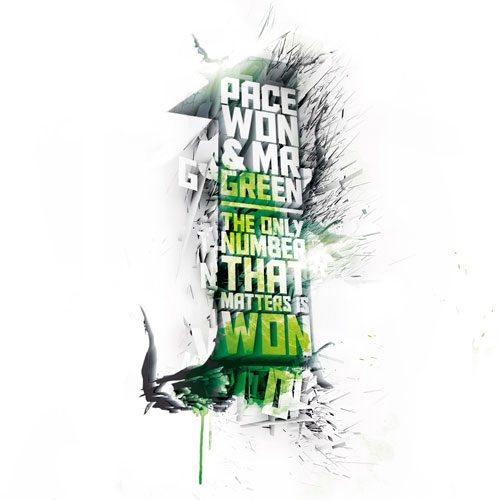 When they first got together for “The Only Color That Matters Is Green,” Pacewon & Mr. Green landed on a deserted spot on the map that isn’t crowded just yet but whose population increases every year. There’s a renaissance of dusty loops, dirty drums and passionate raps in process. The connections are loose, but acts like Action Bronson, Roc Marciano, Torae, Diamond District, Random Axe, Bekay, Celph Titled, etc. all feel an obligation towards ancient East Coast rap tradition.

The duo’s astonishing ’08 effort was uneven at times but had many moments of musical grace and lyrical maturity that make it stand out to this day. Pacewon, speaking his clout since 1996 when he was part of the Fugees’ “The Score” cast, managed what few of his peers have – to incorporate the wisdom that comes with age into rap music that makes noise like in the days of old. It was, if this reviewer had any say in it, one of very few modern day East Coast releases that could hope to become a hip-hop classic. Four years later they return with “The Only Number That Matters Is Won,” a title that suggests nothing less than a complimentary piece to “The Only Color That Matters Is Green.”

The chemistry is still intact as Pace once more helms Green’s spacious, melodically distinct beats with his half-laconic, half-emotional delivery. They charge ahead at a harder pace with the hard-hitting drums and frantic cutting of “Ever Since,” the Jersey rapper setting his goals high:

“Ever since the day my mother pushed me out her stomach
I strive to be the best MC that’s ever done it
So every time I come with the songs, just remember
I do this for the chance to be the greatest rapper ever
And if not the greatest, then I’ma be the freshest
Witty and poetic, yet rough around the edges
Just like KRS, Redman, Biggie and Das
Busta Rhymes, Method Man, Common and Nas
And if I can’t, I’ma still be the people’s champ
and save hip-hop from the man’s evil plans”

Compared to his days with the Outsidaz, Pacewon has simplified his lyrical approach significantly, to a point where simple borders on simplistic. There’s something endearing about how he imagines himself into different movie roles on “Big Screen,” but he fails to add another, more adult layer to it. He remains the kid daydreaming about being up there on the big screen. Likewise he can’t back up “Something to Say” (notably a duet with none other than Masta Ace), one of whose statements reads: “Like Ellen DeGeneres you fags are funny.” And that’s coming from a rapper praising himself as a breath of “Fresh Air” only a few tracks later.

Pacewon is also the umpteenth rapper to start a verse with Biggie’s “It was all a dream,” on “My GOD,” which for once doesn’t reference “I Used to Love H.E.R.” but instead reminisces by way of Pete Rock and C.L. Smooth. Obviously Pacewon and Mr. Green know their stuff. It’s hard not to be reminded of the Beatnuts or Alkaholiks when hearing “We Do This,” a tongue-in-cheek romp and really everything a ’90s head needs – a bumping rhythm track and an effortlessly flowing rapper. Yet speaking of the Nuts and the Liks, something is missing from this track in particular – a lyrical partner. It would have been nice to see him team up with Brick City legends like Redman or Tame One (as he did before) or the similarly nostalgic Rah Digga.

Despite these reservations “The Only Number That Matters Is Won” is far from trivial. The duo create a private party atmosphere on “Champagne,” send out a romantic note to the ladies with the dubby “Be Mine” and eventually even manage a full-blown love song with “Slow.” An album highlight, “Insecure” simultaneously reveals Pacewon’s storytelling abilities and punchline acumen over a delightful groove that would have had heads bobbing in 1993. The fun stops when the authorities enter the picture. “Lock Me Up” closes the album with irreconcilable verses towards police and an exclusive Snoop Dogg hook. No other bit illustrates Pacewon’s lyrical potential better than when he analyzes the penal system in “Real Life”:

“The cops are all over
packin’ semi-autos and shotguns like soldiers
Hasslin’ the public to reach their little quota
of how many people should be locked up or rowed up
and brought to a judge
who in his heart never had no real love for a free spirit or scrub
And who doesn’t care if it’s parking tickets or drugs
he’ll lock you in a cell with car thieves and thugs
Lock you in a cell with stick-up kids and rapists
its crooked C.O.s in love with bein’ racist
It seems now the only way to stay safe is
remain indoors out of sight, remain faceless”

Pacewon has a talent to suddenly probe deep that is only hinted at on this album. “Liquor & Drugs” makes a vague attempt, and “My Song” has an enlightening vocal sample but Pace and guest Rival can’t keep the fire burning. With “The Only Number That Matters Is Won” Pacewon & Mr. Green soldier on for hip-hop. They do so competently, with deft rhymes and majestic beats, from b-boy document “Fresh Air” to the humorously true “Insecure.” But the bar set by “The Only Color That Matters Is Green” isn’t quite reached.