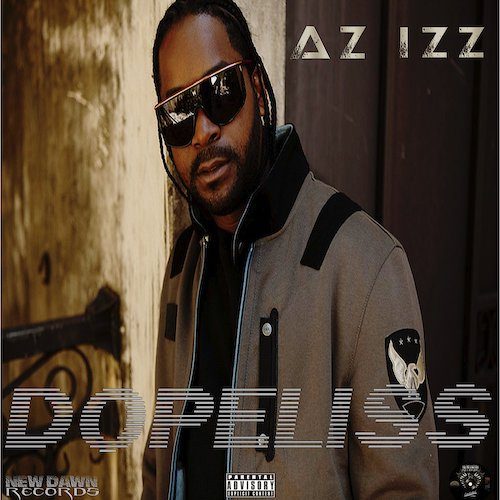 Who’s the first name that comes to mind when you think of Outsidaz? For me it’s either Pacewon (ostensibly the face of the crew) or Young Zee (with one of the most famous shelved albums in rap history). Some might argue that Bizarre and Eminem would rank higher, but more people associate them with D12; the same goes for Rah Digga and Flipmode Squad. Chances are if you know this Newark, New Jersey crew it’s because of one of the two — Pace or Zee. They have the most distinctive vocals and most cult status amongst self-anointed holier-than-thou vanguards of underground rap.

“Az” it turns out though we’re all forgetting about Az Izz though, and as he would say himself “Aw man that shit’s crazy.” The rapper born in Guyana spent his teen years in Da Jerz, quickly linking up with fellow hip-hop heads and developing his own East coast lyrical flow. When you’re part of a crew with over a dozen artists though it’s easy to get lost in the shuffle, and Az Izz didn’t make it any easier on himself by pulling double duty as a producer and an emcee. To obscure himself even further he linked up with fellow producer Mr. Green to promote Outsidaz affiliated projects on their own label. The time for waiting is over though and “Dopeliss” is a chance for Az Izz to step firmly into the spotlight.

The single “Crazy” also features another seldom mentioned Outsidaz member in D.U., not to be confused with Digital Underground, though when you call a song “Crazy” it wouldn’t be far fetched to have Humpty Hump on it. What’s “Crazy” though is how underwhelming the song is. It’s a self-produced track that’s heavy on a kick drum, and it repeats ad nauseum “boom, ba-boom… boom, ba-boom” with no variation. Minimalistic production should make you appreciate the bars more, but “shoot your dick off” threats and crass misogyny doesn’t impress. “Bitch! You thinking a lot/let me finger that pussy/suck my dick while I’m licking your twat.”

Thankfully “Crazy” is not indicative of “Dopeliss” as a whole. “Ghetto” borders on being a cliched narrative of hood life, but Az Izz’ humor shines through on the funky guitar licks he provides. “Still to this day/the rent and cable/is the only freaking bills we pay.” Making this the flipside of “Crazy” was a good choice. Hell maybe it’s the A-side and “Crazy” is the B-side. It’s not like they sent me a physical twelve inch vinyl in the press kit.

There’s also a music video for another single called “Gettin’ It” and this one features an Outsidaz affiliate named Drift. He’s either so new to the crew or so obscure that he doesn’t even rate a mention on their Wikipedia entry, but that’s okay since it’s probably inaccurate or out of date anyway. Az Izz goes heavy on the punchlines for this one: “Here to raise the bar like Conan’s arms/Leave you bleeding like a bitch on her period with no tampons.” For a guy whose nom de plume bookends the alphabet from A to Z, Az isn’t shy about throwing around the “B” word.

Clocking in at just under 40 minutes (39:49) spread over ten tracks, “Dopeliss” has just enough time to make its mark and move on. Even though one might expect him to rely on the more famous Outsidaz to raise his own solo project’s profile, Pacewon’s only appearance is on the opener “Let Me Get That” and Young Zee is nowhere to be found. It’s perhaps more surprising that Az Izz is actually willing to hand the production reigns over to other people for a few tracks. DJ Profluent’s beat for “Interstate” featuring D.U. and Nam is solid if a tad monotonous, while 3rd Rell finds himself in a similar position on “Trouble.” I suppose it makes Az Izz look better if nobody outshines him behind the boards.

As a rap fan I was stunned that Outsidaz didn’t get bigger in the 1990’s and early 2000’s. One dope EP and one average LP were the sum of their output as a group, at which point every member seemed to do their own thing. They’ve always continued to loosely affiliate, feature each other on tracks, and shout the name of the crew out on songs, but it just never became the level of Wu-Tang or Dungeon Family in terms of mass acclaim and mad record sales. “Dopeliss” is not the record to change that, not because it’s 20 years too late to do that (even though it is), but because it’s just “okay.” There’s nothing way below or way above par here. Az Izz just stays the course and taps it in the hole, once in a while scoring a birdie or a bogie, but never breaking away from the pack to hit the top of the leader board.