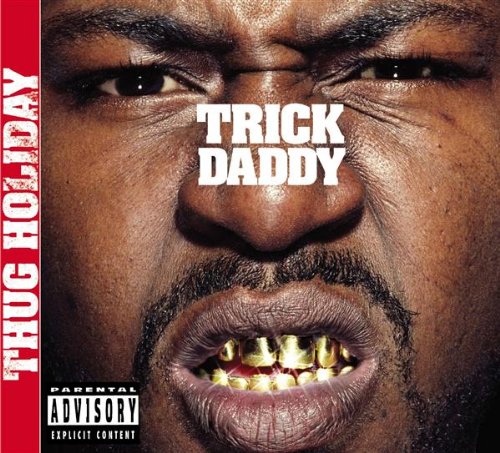 What elevates a rap artist from regional sensation to national or international superstar varies greatly. Sometimes it’s a hit single that catches the attention of listeners everywhere. Sometimes it’s a music video that capitalizes on that single in an eye-catching way. Sometimes it’s a good review in several major publications, and sometimes success builds it’s own success as a rapper stacks gold and platinum plaques so high that even those who once ignored the rapper can’t turn a blind eye.

Dade County, Florida’s own Trick Daddy Dollars can list all of the above in a career that since 1997 has already turned out five albums. Nobody would have suspected after his inauspicious debut with “Based on a True Story” that Trick would be the household name he is today – except perhaps Trick himself. The album pushed double wood, and many of the people who are his fans today probably don’t even own a copy. He was a charismatic engaging hardcore MC whose deep dirty South drawl was an amalgamation of Big Daddy Kane and Scarface, but without a smash hit single on his debut few people took notice. That all changed with 1998’s “www.Thug.com” – an album with a memorable title and an unforgettable song: “Nann Nigga.”

Since then, every Trick Daddy album has had one if not two hit songs that could be heard blasting out of stereos and rattling the trunks of fat rides each summer from coast to coast. Trick has singlehandedly built a Floridian empire in Slip-N-Slide Records with these hits, while his labelmate Trina (who guested on “Nann Nigga”) has gone on to achieve fame and recognition of her own. Trick doesn’t necessarily win accolades for brilliant lyricism, but songs like “Shut Up” and “I’m a Thug” exhibit a pop music sensibility other thugged out rappers seem to lack. The best Trick that Daddy has is a way of making the songs people want to hear, to rap along with, and to sing along to.

T double-D does not fail to deliver these jams on his new album “Thug Holiday.” The Jazze Pha produced Organized Noise duet “In Da Wind” (featuring members Big Boi and Cee-Lo) is quickly moving up the charts, but there are plenty of other possibilities for hits throughout. “Gangsta” has cameo appearances from Baby (Big Tymers) and Scarface, but what will really please fans is Minnesota’s fat beat and Trick’s trash talking about pushing dope. The title track is Daddy’s typical “show you my gentler side” song that seems to appear one per album with crooning from LaTocha Scott to put it all together. He never keeps it soft for long though. The pimped out “Let Me Ride” pays homage to P-Funk and Curtis Mayfield; while “Rock N Roll Nigga” shows just how he puts it down without taking any shorts:

“Beitch, I’m the Daddy Dollars y’all
I’m from the city of Caprices and Impalas y’all
And my dubs love silicone, fuck Armor All
You can, call me the boot underdog
[…]
And when it comes to toppin yo’ chops
or rockin yo’ spots then I guess I’m hip-hop
But when it comes to gettin money, pullin triggers
Call me a rock’n’roll ass nigga!”

“And there damn sho’ ain’t no Santa Claus
Cause if it was, ask Santa what happened to Thanksgiving dinner
While y’all was dreamin of a +White Christmas+
I was out chillin with my niggaz out stealin tryin to make a livin
And if I rob for a million, hell
I’m sho’ God’ll forgive me after I spend it on the children
See I was born in the struggle
Eighty-nine step daddies, me and my mother and ten others
Let’s see that’s.. three sisters and seven brothers
All we had was each other and I did it cause I love ’em
I never seen a flyin reindeer
Therefore when Rudolph call dawg
y’all just tell him I ain’t here!”

With Trick Daddy albums you usually know what to expect in terms of the rapping and lyrical content – baudy boisterous unashamedly nasty dirty stinky funky enjoyable ignorance, with occasional paens to penning something that’s sincerely heartfelt. With the topic matter already established, it’s usually the beats that make or sink the non-hits on a Trick Daddy album. This time the majority of the beats are top notch, such as the pounding Miami style “SNS,” the dancefloor anthem “Got That Feeling,” and even the celebratory “God’s Been Good” featuring Betty Wright’s Children Choir. A wide range of producers contributed, but from Gorilla Tek to David Banner to Jim Jonsin they all match fat basslines to Trick’s thuggish rhymes. “Thug Holiday” may be just the vacation from over-intellectualized and sluggish albums full of complex and profound meaning. He’s not always trying to be deep, but he is trying to have fun and make good music – and Trick’s sensibility for making hits pays off on this album; which may be his most consistent and enjoyable album save for “Book of Thugs.”