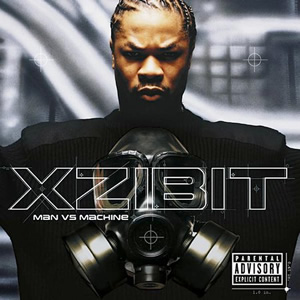 You can call him Alvin Nathaniel Joiner, or you can call him X if you like, but best believe either way that the only high you’re going to get from him is through beats and rhymes. An industry veteran in a business where rappers and groups are often one and out, Xzibit has stuck around to release his fourth album by never relying on cheap gimmicks or having albums with one great single and twelve mediocre tracks. The X Man has a hard edge honed to razor sharpness, but he’s never been afraid to get personal on songs like “Foundation” and “Sorry I’m Away So Much.” The result is that his gritty, growling, smoky vocal flow rumbles over hard beats the way Barry White floats on velvet R&B tracks.

If it ain’t broke, don’t fix it. Having perfected his style on “40 Dayz & 40 Nightz” and improved it with an injection of Dr. Dre thump on “Restless,” Xzibit chose wisely to stick with this sound on the new release “Man vs Machine.” The list of producers involved is therefore not at all surprising: Dr. Dre, Jellyroll, Rick Rock, Rockwilder, Erick Sermon, Ty Fyffe and more. As for guest appearances, M.O.P., Nate Dogg, Snoop and Golden State Warriors all get mic time. The only surprising and somewhat dissapointing absence is that of his running crew Tha Alkaholiks. Hey X, don’t forget about’cha homies! Well, he didn’t forget about one at least, because Eminem gets in the mix by producing his own track “My Name” while he and X vye for the spotlight:

“I’d have my motherfuckin ass kicked by Moby
if I let some bitch in the can like ‘Bis cop over me
to do war, and try to bring my crew back down
I’ll never stoop, to that level, to do that now
I got a new cat, this time I’m pullin two gats out
with bullets {*BLAM*} I finally got somethin to shoot at now” – Eminem
“Let’s see who got they city on lock
Let’s see who got the better aim with the glock
Let’s see who come out on top
Let’s see who REALLY want they name in the street
Let’s see who wanna die the same time as me; and make ends meet” – Xzibit

The biggest curveball that X throws listeners on this release is rapping over Toto’s “Africa” on the song “Heart of Man.” Given the strength of his rhymes and how surprisingly well the soft track meshes with his titanium-tough flows, this can easily be forgiven:

“Ain’t a damn thing promised to ya (nah)
Except livin your life and dyin one day, I’m just bein honest to ya
It take a whole lot, just to get a little
Gettin caught up in the middle, the answer to life’s riddles
never, come that easy, but it was easy to leave me
But it wasn’t easy to see me”

Hardcore Xzibit fans and general hip-hop listeners will both have a lot to bounce, rock, roll and skate to. From the Chronic-esque sound of “Symphony in X Major” featuring Dr. Dre, to the hilarious Suga Free pimp imitation X does over the Dre produced “Choke Me, Spank Me (Pull My Hair)” the bases from severity to comedy are all covered. Xzibit always seems to have a bit of a smirk on his face and in his flows, and it shows on tracks like the lead single “Multiply” featuring Nate Dogg:

“Get it crip while the gettin is good
Before the game is 10% skill and 90% Hollywood
I don’t need that, I don’t believe that
E’rybody gon’ get hurt, if I do dirt
I flirt with the idea of quittin the game
NAH!! I’ma evolve, continue to change
It take brains, balls and backbone to get it on
and keep it on, we keepin it movin, to each his own”

Early adopters of Xzibit’s new technology may also receive a limited edition double-disc version of the album, complete with three bonus tracks: “My Life, My World” produced by Bink!, “What a Mess” by DJ Premier, and “(Hit U) Where it Hurts” by Rockwilder. All three songs are worth the price, but the second cut is probably every rap head’s wet dream come true – a hit of X over Primo’s rugged anti-establishment hardcore rap beats. Xzibit steps up to the plate given this chance and he knocks one out of the park:

“Listen I seen niggaz hit with so much time loc
they have to die and come back three times to see them white folks
Take notes, cause you will be tested
Vested up, drunk as fuck, large caliber weapons
I feel you.. rap niggaz, fuckin it up
Monkey-mouthed muh’fuckers, spoilin the cut
For real niggaz in the street, really hustlin weight
See they networks and blueprints on hip-hop tapes
Johnny Law catchin on, soakin up the game
How you think they find the stash box, dem follow the slang, stupid!
Grown men playin cops and robbers
Death for dollars, I’m too laid back to holla
What a mess…”

If hip-hop to you has lately seemed to be awash in the sea of mediocrity and banality that Xzibit decries, then you might want to check out the Man who is willing to challenge the Machine. Not afraid to be original, Xzibit is the true definition of “keeping it real” – he doesn’t have to fake it, he just does it. The only changes one could ask for are to bring E-Swift, J-Ro and Tash into the mix on a track or two, but X is still an Alkaholik whether or not he throws the bottle up – so take a drink and intoxicate yourself on the West coast’s finest.