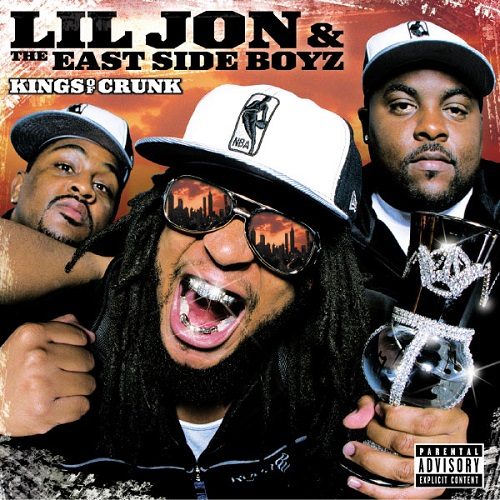 Lil Jon & the East Side Boyz :: Kings of Crunk

For the last few years, Lil Jon and his East Side Boyz have been striving to epitomize everything that’s “crunk” in all the above categories. After the success of last year’s “Put Yo Hood Up” it’s hardly suprising that they would just say “fukkit” and claim the title of “Kings of Crunk” all to their own. Few would dispute it, because even when you don’t hear Jon’s vocally screamed hooks or his Boyz rapping, you still hear Jon’s bouncy and straight dirty Southern rap beats on albums from Ludacris to Pastor Troy. It’s a trademark sound that’s hard not to recognize right away: a little bit slow, full of low chords and repeating keys, paired with electronic drum beats and heavy basslines. The music pulsates and breathes darkness, and sounds just like something that COULD push you over the edge to get crunk and “Tear Da Club Up” like Three 6 Mafia. But hey, we all know that music doesn’t cause people to get violent… right?

“Kings of Crunk” could make people question that assertion. “(We Run This) Bitch” featuring Chyna White and Too $hort literally begs people to “start a riot in this (bitch, b-bitch) or get the fuck out this (bitch, b-bitch)” and then takes it a little FURTHER with the following admonition from Jon: “All y’all club managers, and club owners, it’s bout to get real ugly in yo’ motherfuckin club right now! I’ma tell you like this, get your motherfuckin security ready, cause I think some shit about to go down nigga.” His refrain afterwards emphasizes the point: “Let me see you get crunk, let me see you get buck, let me see you tear the motherfuckin club on up!” There’s really no mistaking what Jon’s all about lyrically or musically here – his goal is to make you straight go nuts.

The whole album’s like that. Don’t expect to find anything that’s soft, radio playable without heavy editing, or not laden with lots of energy. Like a good M.O.P. album, this is wilding music – it’s meant to make you get out your seat and move to the beat. Though the sound can at times be slightly repetitive, and Jon and his crew don’t have much to say lyrically, the wide variety of guests help make up for that. The all-star “Rep Yo City” featurings Bun B, E-40, Eightball and (not suprisingly) Petey Pablo. The Screw-esque “Diamonds” featured MJG and Bun B of UGK. “Play No Games” stars Fat Joe, Oobie and Trick Daddy – it’s as close to radio crossover as this album gets, although Joe’s verse alone would need serious work to be FCC approved:

“Ain’t no tellin what a bitch’ll do
For the dough she probably get on four and fuck the crew
Down South, up North be the same-ass bitches
Man locked up but momma watchin the children
Talkin bout, ‘My Neck, My Back’
Bitch, you better learn how to chop rocks
if you wanna get with Crack.. uhh, I been in love once
Least I thought that ’til I fucked around and hit it raw back
Got burnt, now you figure the rest
Dick hurt like I’m pissin baguettes”

Yes, I’m not kidding – that really IS as close to radio playable as this album gets. While this album doesn’t really offer anything profound or meant to elevate the mental, not every album is meant to anyway. If you’re looking for a CD that sounds good played really loud and makes good theme music for a Saturday night when you want to let it all hang out and see what happens, the “Kings of Crunk” may just have what you’re looking for. On this album, it’s all about the beats baby.