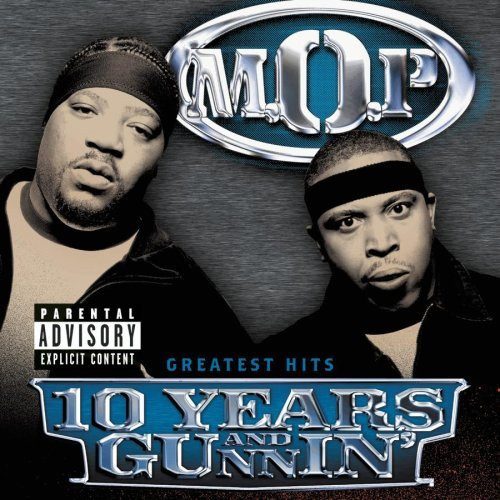 Over the 90’s, the award for “angriest rap artist” could have handed out to a dozen different candidates. At different times, Ice Cube, Sticky Fingaz, DMX and the underrated Freddie Foxxx among others were all contenders. In the category of “angriest rap group” though, one crew has dominated the whole shit for “Ten Years and Gunnin’,” and that’s the Mash Out Posse. Billy Danze and Lil’ Fame have only one level of intensity, and that’s EXTREME. Give them a microphone and they don’t speak into it, they SCREAM into the summa’bich until the speakers explode – or as Fame himself says, “M.O.P. tapes make earthquakes and cause landslides!”

No loud and angry rap crew can survive just on the strength of being loud and angry though, as the baldheads from Onyx learned the hard way. To stay the leaders of the bumrush pack, angry rhymes have to be combined with heavy beats and powerful rhymes. That’s the genius of M.O.P. – brutality in beats, rhymes, and style come together in an adrenaline-laced orgy of insanity. This is slam-dancing, mosh pit style hip-hop, with no apologies to anyone. If M.O.P. were from the South it’d be called “krunk” and just like Three 6 Mafia, they’d be out tearin da club up.

Unsurprisingly, a decades worth of their “hell-raising, gun blazing” raps as Danze himself describes it makes for an intense experience. If you didn’t catch a ride on their bandwagon after the crossover smash “How About Some Hardcore,” this is your chance to get on board. It’s entirely appropriate for the album to start with this song, as it set a standard for the group they have always strived to equal or excel, succeeding more often than not. Fame’s hook was ready made old school call and response, with the duo yelling out “How about some hardcore?” with the answer back being “YEAH WE LIKE IT RAW!” D.R. Period’s banging beat and this chant would have been a hit of their own accord, but unlike Tag Team’s “Whoomp, There it Is” there’s some true depth to this hit. It starts off with Danze issuing a warning to all would-be foes:

“I packs my gat, and I got ta stay strapped
I bust mines, don’t try to sneak up on me from behind
Don’t sleep, I get deep when I creep
I see right now I got to show you it ain’t never sweet
Go get your motherfuckin hammer, and act like you want drama
I send a message to your momma
‘Hello, do you know you’re one son left?
I had license to kill and he had been marked for death
He’s up the Hill in the back of the building with two in the dome
I left him stiffer than a tombstone!'”

Not to be outdone though, Fame’s warning lets you know he ain’t no joke like Rakim:

“Yo, I scream on niggaz like a rollercoaster
To them wack motherfuckers, go hang it up like a poster
Niggaz get excited, but don’t excite me
Don’t invite me, I’m splittin niggaz heads to the white meat
Try to trash this, this little bastard’ll blast it
Only puttin niggaz in comas and caskets
I ain’t a phoney, I put the ‘mack’ in a -roni
I leave you lonely (Yeah, yeah, get in his ass homie)
Up in your anus, I pack steel that’s stainless
You claim to claim this, and Li’l Fame’ll make you famous”

This album doesn’t just stick to their best known hits though. The seminal “Handle UR Bizness” from the often overlooked 1998 EP of the same name is included. It’s hard rock meets hip-hop, with crunchy guitars courtesy of Laze E Laze and a smooth mixdown by DJ Premier. The self-produced “Fly Nigga Hill Figga” is just as tight though, and even includes a little “history lesson” courtesy of Fame:

“We brought a very raw chapter, from the history of slinging crack
To the history of rap
From the history, of street misery
The Brownsville, Brooklyn, Vietnamese
William and, Womack pa
It’s known that you get your shit blown back, pa
The Hill is still real, we own that pa
(Cock back the chrome) cause you don’t clap, pa
What it look like, when they on the pipe?
Slingin them things to fiends, gettin cream all night
(Gotta get my hustle on) Go ‘head
Cause I knows what it be like, when you got no bread
When you down and out, people turn they back at you
Even the chickens try to disrespect the rapper dude
I got gratitude, baby I ain’t mad at you
I bet you that pussy is stink as your attitude!”

Speaking of history, the inclusion of “4 Alarm Blaze” featuring Teflon and Jay-Z was a wise decision. More than any other song, this was probably the beginning of M.O.P.’s road to Roc-A-Fella Records (and a much anticipated new label debut in 2003 for the crew). Anybody who thinks Jigga is soft probably never heard his grand finale verse at the end of this song:

“Too-ass quick for bastards to step to
Leave wounds too drastic for rescue
When I rock jewels it ain’t to impress you
What the fuck niggaz commentin on my shit fo’?
I’m real – how you think I got rich ho?
Pack steel – ain’t afraid to let a clip go
I got enough paper to get low
Come back when the shit blow over, get the dough over
Huh, wit the Rover snatch the gat from the clip holder
Rip through ya shoulder; bitch, it’s Jay-hovah
I’m too right wit it, too tight wit it
You light witted but if you’re feel ya nice nigga spit it
Who am I? (JAY-Z MOTHERFUCKER)
Do or die (IN BROWNSVILLE MOTHERFUCKER)
Blocka, rocka, M.O.P collabo’
Front on us and gats blow, ya KNOW?!”

D.R. Period was far from done when he created the beat for their first hit, as the next track “Ante Up” proves. Whether or not it achieved the same amount of crossover success can be debated, but what can’t be is that the track was a huge smash among hardcore hip-hop fans. The track is so damn good, you can even stand listening to annoying-ass Funkmaster Flex screaming over the intro. At a time when hip-hop was getting over-saturated with “bling bling” songs, this song was the rallying cry for the poor, broke, or just plain fed up – cause the wealthy were about to get a heads up. Here’s how Danze puts it: “From the street cousin, you know the drill/I’m nine hundred and ninety nine thou’ short of a mill!” The chorus that followed it seals the deal:

“Ante Up! Yap that fool!
Ante Up! Kidnap that fool!
It’s the perfect timin, you see the man shinin
Get up off them God damn diamonds! Huh!”

If it gives you any idea how hot this song was in the rap world, hundreds of thousands of people probably bought Funkmaster Flex’s “The Mix Tape Volume IV” just to get the “Ante Up Remix.” Those who didn’t can get happy now, because the song is included here so you can hear the new verses and guest raps from Busta Rhymes, Remy Martin and Teflon. The latter proves he’s an M.O.P. soldier in his own right, out to take shit from NOBODY:

“(ANTE UP!! Yap that fool!)
Fuck hip-hop! Rip pockets, snatch jewels
(ANTE UP!!) What? My whole family nuts Run up yo’ stash house, tie granny up
Make you strip butt-naked
Young buck got struck with the gun butt (for what?)
For tryin to tuck the necklace
I’m young hungry armed and reckless
On the streets with a death wish
Don’t hide when you see me, I’m on the guest list!”

From start to finish, the album is solid packed with M.O.P. classics like “World Famous,” the anthemic “Downtown Swinga” and their sensational song “Cold as Ice” which took a Foreigner sample and made it into the hook of one rap’s hardest ever songs. Fizzy Womack proved he was one of rap’s best producers with this track, but when he grips the mic as Lil’ Fame he’s not only deadly, he’s comedic gold:

“Pardon me!
How the fuck you gon’ start with me?
I’m a heavyweight in this game, you just spar with me
You get laced down, from your face down, drop your shit
Niggaz thought M.O.P. stand for ‘mop’ and shit
Don’t don’t DON’T, get it twisted
I told you that we top of the line designed realistic
For instance, MASH OUT POSSE
will come through and clear yo’ ass out
dump and air yo’ ass out, CHUMP, we cold”

By this point in the review, you may have the impression this is a flawless album. Very few “greatest hits” releases ever are though, and this one is no exception. First, for a group that are legends in their own time, only including TEN SONGS was a mistake. This album barely clocks in at over 40 minutes, and their last album “Warriorz” was just as good from start to finish while being nearly twice as long. This means a lot of their classics aren’t included, such as 1996’s “Stick to Ya Gunz” featuring Kool G. Rap or “1/2 & 1/2” from the Blade Soundtrack. The latter exemplifies what greatest hits albums SHOULD do, and that’s include extra shit that’s not as well known to justify the purchase price for both old fans and newcomers alike. Taken as a whole this is still a fantastic album, but it really doesn’t seem to do hip-hop’s perennial “angriest motherfuckers in rap” award winners justice.