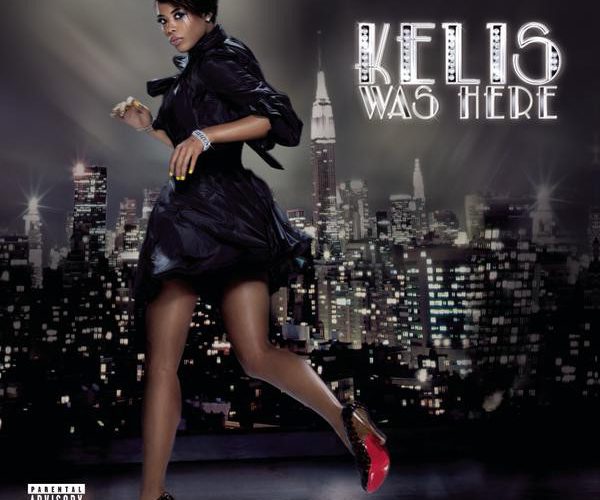 Kelis had established herself by association. She’d been prancing around the sets of Flipmode videos (clad in shimmering silver, no less) and being mercifully blessed by the platinum-coated fingertips of Pharrell and Chad Hugo for years. Homegirl was busy pealing out ODB hooks and catching the eye of QB’s finest until the infamous “Milkshake” smash hit, a tune she may very well be remembered (or forgotten) for. For once, her name was on tongues without a “featuring” preceding it. I couldn’t even buy groceries without hearing OLD LADIES “bring all the boys to the yard. (No lie!)” All things aside, she’s never gotten the credit she deserves, not only as a solo talent, but as one of the more experimental figures in hip-hop and R&B.

If there is an underlying theme on “Kelis Was Here,” it’s that she’s her own entity. Nobody represents her but herself, and after years of witnessing the biz’ corruption firsthand, she can make up her own mind. She’s waving the “independent woman” flag, but don’t you know it, her name will probably be linked with hubby’s ’til the end of time. You wouldn’t know it though; Nas’ name is nowhere to be found, liner notes included. He is alluded to on many counts, though, and considering the number of love songs, the album itself might be something of a dedication.

Before romance and affection, however, she charges a little R-E-S-P-E-C-T up front. “Bossy” is obnoxious at first listen, but proves all the more charming, Kelis playfully reveling not only in her own self-government, but the lasso swinging from Nasir’s neck. If it seems at all in ill will (…), she justifies it with “Living Proof.” At the end of the day, it’s a love song, but her nothing-to-something tale is a passionate one: for the longest time she had nobody, but after finding love, she finally feels like someone. “You may not believe,” she croons, “but I am living proof.” The first-love phenomenon repeats itself on “Like You,” another simple number: “I don’t just like you, I like you.” It’s some sort of powerful when a hip-hop chick sounds so genuinely innocent on a track specifically written for another. But if that’s innocent, “Lil Star” is downright cherubic. Cee-Lo, clearly more comfortable on his own tracks than he is with Danger Mouse’s, plays the encouraging father figure to Kelis’ self-depreciative baby girl. “There is nothing special about me,” Kelis persists, to which the soul machine gently amends: “How inspiring it is to see you shining/’cause in the dark of night, you’re all I can see, and you sure look like a star to me.”

“Circus,” a brilliant confession, makes for the most interesting track of the album. “Never did I meet a trick, y’all, but they told me this is how to get rich: make a hit song, same lame lyric, same bass, same kick drum.” Kelis’ depiction of the industry as a circus is purely sublime; another clown on display, she’s ashamed of the bullshit and regrets fame, to the point of justifying her cause. “Can you blame us?” she inquires, “It started out fun.” The whole song is quotable, and her flow (yes, she raps) is immaculate. “Weekend” follows awkwardly as aftereffect, Kelis donning her “circus” garb once again for Will.I.Am’s club joint.

Club joints, you ask? There are enough. “What’s That Right There” is the prolific Will.I.Am once again making the most of his manic energy, but he can’t hold a candle to “Aww Shit!,” a Shondrae Crawford banger with all the makings of a, drum-roll please, Black Eyed Peas smash. Additionally, Cool & Dre get your head nodding on the remarkable Kanye impersonation “Goodbyes,” hand claps and sped-up bongo drums in full effect. Kelis does not particularly impress on any of these, but she’s worse when she gets too authoritative too many times. While “Bossy” would have sufficed, “Handful” and “I Don’t Think So” totally kill the whole bitchy hard-to-get thing. It isn’t aggravating per se, but it’s no fun for anyone when she literally reverts to na-na-na-na-na.

I caught myself giving “Kelis Was Here” considerable rotation. The production stands out, giving Kelis all she needs to get the album off the ground, and that she does before too long at all. She does so many things right it’s hard to point out any one in particular, but it’s worth noting that her devoted-to-Nas pieces are executed better than his committed-to-Kelis bits from two years ago. Legitimizing herself as a lyricist and an artist, Kelis proves that she’s more of a force to be reckoned with than ever before, that is, when she’s not too domineering. “When he wanna, he blindfold me!” she cheers on “Blindfold Me.” Yikes! She’s such a tease.