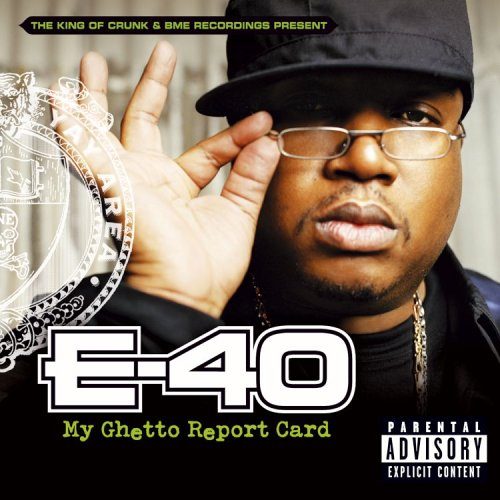 You know what it is when you throw an E-40 CD in the whip or the boombox – it’s time to get HYPHY. Contrary to popular belief the word is not necessarily synonymous with crunk. “Crunk” is predominantly associated with getting rowdy and aggressive, while “hyphy” can be better understood as “getting loose and having fun.” Some would even claim the word is an amalgamation of the terms “high” and “fly,” but only a Yay Area rapper like Earl ‘E-40’ Stevens or Keak Da Sneak would know for sure (some say the latter originated the term). Nevertheless the line between the two words is only going to be blurred further by the fact that 40’s new album “My Ghetto Report Card” is being released on Reprise/BME. If BME sounds familiar it should – it’s Lil Jon’s imprint, and who other than Lil Jon is more closely associated with crunk? Previous artists on his label like Trillville and Lil Scrappy have gone hand in hand with the crunk style, releasing anthemic hits that featured Jon’s noisy and thumping hip-hop beats. It should come as no surprise then that 9 out of 20 tracks on “My Ghetto Report Card” are Jon beats including the lead single “Tell Me When to Go”:

“Ooh; Jesus Christ had dreads, so shake ’em
I ain’t got none, but I’m plannin on growin some
Imagine all the Hebrews goin dumb
Dancing on top of chariots and turning tight ones (eeerrrrr!)
Ooh, tell me when to go (dumb)
Talking on my Ghettro on the way to the sto’
… My 2nd or 3rd trip
Some Henny, some Swishers and some Listerine strips
Dr. Greenthumb lips, just to ease my thoughts
Not just the cops, but the homies you gotta watch
The moon is full, look at the dark clouds
Sitting in my scraper, watchin _Oakland Gone Wild_; ta-dow!
I don’t bump mainstream, I knock underground
All that other shit, sugar-coated and watered down
I’m from the Bay where we hyphy and go dumb
From the soil where them rappers be getting they lingo from”

That’s as succinct a definition of the Oakland lifestyle and E-40 himself as he’s ever put on wax. Appropriately enough Keak Da Sneak co-stars on this track, a hard pounding track with enough bass to shake the subwoofers out of your box. Unfortunately Jon has a tendency to be a hit and miss producer, so even though Earl Stevens is as consistant as ever after a long career half of the songs on “My Ghetto Report Card” are all over the map. Some Jon beats can survive solely on the thump with no melody, but “Muscle Cars” is not one of them. Sampling “Fly Girl” by the Boogie Boys for a thump-only track works better on “White Gurl,” much better than it did when Jay-Z and Lil’ Kim put it on “I Know What Girls Like.” U.G.K.’s own Bun B and Pimp C laying down verses makes it extra sweet, but just so you don’t get the wrong idea that this is a party track “White Gurl” means they’re cooking up crack in the kitchen. “U and Dat” will probably be a club hit thanks to T-Pain and Kandi Girl, but it sounds like every Usher track Lil Jon ever did. The chorus of “I’m Da Man” works thanks to low end keys, but the four-note melody of the song itself gets irritating over time, not unlike the Mike Jones cameo. “Yes” featuring Too $hort and Budda is everything so many of the other Jon tracks aren’t – layered up and heavy without being obnoxious and repetitive. Jon’s best work may be best at the album’s end on “Just Fuckin” and “Gimme Head.” Both tracks feature Bosko on the mic, but on the first of these two he also shares production duties and it shows, varying up Jon’s sometimes predictable style effectively.

The best tracks are the ones handled by the names who have worked consistantly with 40 over the last 13 years. Rick Ross comes with the melodious thump on the opener “Yay Area,” with an understated chorus that makes 40 the clear star and a surprisingly effective Digable Planets sample. Stevens says it best himself: “The West ain’t been the same without ‘Pac/so I, guess it’s up to E-40 and Rick Rock.” You can hear Rock throughout the album and unlike Jon he comes correct every time, whether it’s on the slightly creepy and _Psycho_ style track “Gouda” or the old school Click sound found on 40’s paranoid Rockwell surveillance attitude “They Might Be Taping” cut where Stevens notes the frauds are “selling mo’ wolf tickets than fake autographs on eBay.” Old E-40 compadre Studio ToN also gets in the musical mix, rolling with a slow bass growl on “Block Boi,” making you wish he’d come through with more beats. Bosko produces AND plays all the instrumentals on the extra smooth “Happy to Be Here” closer, and you end up thinking he should have got some more tracks and Lil Jon a few less. 40’s at his storytelling best here:

“Pork chops and chicken, we like our food fried
Hypertension, Prenavil pills and hydro-chlorizide
Some of my family still living, some of my family died
Health complications, natural causes and homicide
Just tryin to survive, nothin to lose but plenty to gain
Started hustlin, flea flickin and servin that candy cane
Put all my cars in my lady name, as a true hustler should
She had a 9 to 5, worked at Planned Parenthood
While I was in the hood, up to no good
with a hoodie over my head, tryin to outslick the feds”

It’s the strength of Earl Stevens vocal performances that carry “My Ghetto Report Card” in 2006, even though there are some musical miscues and a few too many guest rappers that steal a spotlight which should by all rights be almost solely his. This won’t go down as a seminal 40 album like “In a Major Way” or an unheralded hip-hop work of art like “Grit & Grind” but it should keep the majority of his fanbase happy ’til the next release. As long as he doesn’t wait another three years from this release to the next one as he did with the last one, it’s all hyphy.