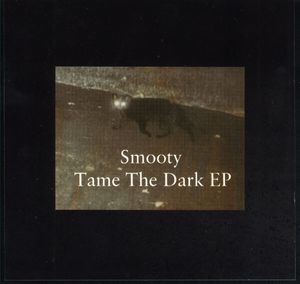 Let’s welcome another young Jedi striving to overcome the dark side with the force of hip-hop. In the case of Smooty (born Matthew Smoot), there’s more to this analogy than meets the eye. No, he’s not working on some nerdy fusion of Star Wars and hip-hop, in his songs he’s fighting back the shadows that we ourselves cast upon our planet and our lives. On his “Tame the Dark” EP, the Cincinnati rapper settles the score with everybody from ex-lovers and ex-crew members to President Bush, from the entire human race to his own bad self.

On “Nobody”, him and guest rappers 13th Floor and Silent Assassin collectively try to come to grips with the female mindframe: “Bonita Apple treatin’ me like a Bum, won’t put me on / this mother’s nature is confusin’ me, no calm before the storm.” He may name-check one of hip-hop’s greatest love songs (A Tribe Called Quest’s “Bonita Applebum”), but Smooty is sure to let you know that he’s got “jaded views when I spit haikus on l-o-v-e.” Whether it’s haikus or straight up rhymes, it soon becomes clear that playful manipulation of words and injection of references are two of Smooty’s main features:

“Femme fatales, they have a plan
Best ‘protect your neck’ from the Pu-Tang Clan
Their roles reversed, making Cupid shed a tear
Liable to give Shakespeare the shakes
when she stab him with the spear”

It’s not like “Nobody” could be called lighthearted in any way, but the tone gets decidedly more serious on “Soul Mate Temp Service”, the EP’s second song about relationships. “Ironic I complain / females only thing that keep me sane,” admits Smooty, yet still he chooses to “expand upon the crazy ones.” Giving a summary of the kind of relationships he will describe in the three following verses, Smooty finds a way to prepare us for what we have to listen for. Given his none too conventional writing, it sure helps to have some guidelines. Still, it shouldn’t be too hard to figure out that “Vice City” targets the author’s own self-destructive behavior. “Natural Instincts” can be filed under the same subject, but in a broader context. To a track that can be best described as esoteric, a sparse mix of tropical musical ingredients, Smooty paints a bleak picture of human nature:

“Thank you for this food, god forbid we see the recipe
Salmonella, ecoli, West Nile, NutraSweet
ticks and Coronas – don’t forget the Lyme
disease; trees barkin’ up the wrong hollow
Follow leaders off the plank where the end begins
Enemies with your god, prayin’ you was friends
‘Welcome to the Jungle’ with Guns but no Roses
No invitation; every specie imposes
on another, commonplace to kill your brother
Broad daylight murder, no killin’ undercover
Urban jungle where the dog eats the dog
where pigs harass, canibals fry the hog
One man wants more, next man dies
Simply put, modern day Lord of the Flies
In the jungle and the city we get pushed to the brink
of insanity, forced to unleash natural instinct
Although we slave to see another day
omega-alpha kills predator and the prey
‘Everything happens for reason,’ that shit I can’t stand
How ’bout a kill you, man, and say it’s just part of the plan?”

Anybody with that kind of outlook will not be too pleased with the current militaristic US policies. For Matthew Smoot’s unadulterated opinion on his government, check “Proletariats”. After rudely interrupting someone solemnly singing Samuel Francis Smith’s patriotic “America”, Smooty starts taking shots at George W. Bush, calling him “the epitome of a pawn” and a “simple temple apprentice, illuminatin’ to the Mason.” This mixture of conspiracy theorism, sly wordplay (“anti-trust is a must in this society”) and attempts at reviving the class struggle may not be to everyone’s liking, but then again Smooty isn’t making it particularly easy for us in any department.

It’s hard to remember a rapper who shows as little emotion in his vocal expression as this Midwestern in his mid-twenties. The almost complete lack of any melodic trait in Smooty’s delivery is something to get used to to say the least. But more problematic is that he, despite being exposed to rap music since an early age, seems to have neglected the development of an interesting flow, running the risk of ending up another rapper who may have insightful lyrics but hasn’t found an adequate form to deliver them. A nonetheless solid overall performance prevents him from falling into that category, but paired with his unwavering voice and similarly neutralized drum and bass sounds, it makes for a rather bland listening experience. What saves this EP sonically are Smooty’s relaxed voice mixed intimately close to your ear and various melodic elements woven into the sound fabric.

The way hip-hop has grown in the past twenty years, the way it found new ways of expression and gained new fanbases, it has become simply impossible to judge every rap record by the same standards. Somewhere out there, admidst all the people who would never consider shelling out money for something like “Tame the Dark”, there are those who are willing to do just that. If you think you can accomodate yourself in a somber, spartanic musical environment and don’t mind an MC talking about our failures and fuck-ups, look out for Smooty.